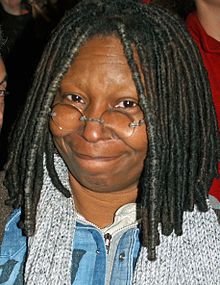 For her role as Oda Mae Brown in the US film Ghost - Message from Sam , she was awarded an Oscar for best supporting actress in 1991. In the same year she also received the Golden Globe in the category Best Performance by an Actress in a Supporting Role in a Motion Picture. In 2002 she was awarded the coveted Tony Award for theater and musicals for the musical Thoroughly Modern Millie. She also received an Honorary Grammy in 2002 in the Outstanding Special Class Special category. She is one of the few people to have won all four of the major US entertainment industry awards.

Another high point in her career was her lead role in the comedy film Sister Act , in which she played a show singer named Deloris van Cartier . Due to the great success of Sister Act , a sequel was made: Sister Act 2 - In divine mission . Since 2006 there is also the musical Sister Act , which premiered in California; she was co-producer of this musical.

Goldberg was born in Chelsea, Manhattan, to nurse and teacher Emma Johnson (née Harris) and clergyman Robert James Johnson, Jr. Goldberg's closest ancestors came from northern Georgia , Palatka, Florida, and Virginia . Her stage name "Whoopi" comes from the term, whoopee cushion , whoopee cushion. She got the nickname Goldberg from her mother so that she would have more success in showbiz.

The motivation to start a career on stage was largely based on her role model, Nichelle Nichols , who played the communications officer Nyota Uhura in Starship Enterprise . Goldberg was already on stage at the age of eight.

After starting her career as a stand-up comedian in the San Francisco Bay area , Goldberg designed the one-woman show The Spook Show . This show got her the attention of Mike Nichols , who put the show out on Broadway. From 1979 to 1981 Goldberg lived in the German Democratic Republic , where she was involved in several theater productions. During an interview, she told how she smuggled everyday necessities into the country that were not available to some of the actors in the GDR. Then she was on stage from October 24, 1984 to March 10, 1985 in 156 sold-out performances in the one-person show Whoopi Goldberg . The show earned her the first Tony Award and the Theater World Award .

Goldberg's film career began (apart from an avant-garde low-budget film three years earlier) with her role as Celie in Steven Spielberg's film The Color Purple , which is based on the novel by Alice Walker . For this role she was nominated for an Oscar for best actress in 1986. Another always sold out and highly acclaimed one-woman show on Broadway followed.

In most of her films in the 1980s she played roles of strong women in slightly comedic films such as Die Diebische Magpie , Fatal Beauty or Jumpin 'Jack Flash , but also in some family-oriented films such as Clara's Secret .

Fearful of disappearing from the public eye, she revived her career with a role in the film Ghost - Message from Sam as a fraudulent clairvoyant who makes contact with a deceased. For this role she was awarded an Oscar in the category Best Supporting Actress in 1990. She cemented her reputation as an actress when she played a club singer in the 1992 film Sister Act who went into hiding in a monastery and revived the choir there. She is also known to many for her regularly recurring guest role as Guinan in Starship Enterprise: The Next Century , which she embodied in 28 episodes and two movies.

Goldberg starred in 149 films by October 2002. She was nominated twice for an Oscar and got one. She received five Daytime Emmy nominations, one of which she won. She has been nominated for an Emmy five times . She was nominated three times for the Golden Globe and won two of them. She received the People's Choice Award three times . She has been nominated five times for the American Comedy Award, of which she won two. In 2001 she won the Mark Twain Prize for American Humor. In 1994, 1996, 1999 and 2002 Goldberg hosted the Academy Awards.

Her own sitcom , Whoopi , was discontinued in April 2004 after only one season due to poor ratings. In September 2007, Goldberg then took over Rosie O'Donnell's place on the US panel show The View .

Goldberg acted in the musical Sister Act - The Musical , which she co-produced in London's West End from August 10 to 31, 2010 as the second leading role of Mother Superior . All performances in which Goldberg was supposed to appear were completely sold out. Goldberg, however, broke off their performances prematurely and immediately traveled back to the USA on August 27th because of an illness of her mother.

Goldberg was married three times: 1973 to 1979 with Alvin Martin, 1986 to 1988 with the cameraman David Claessen and 1994 to 1995 with fellow actor Lyle Trachtenberg. Goldberg and Martin have a daughter named Alexandrea (born May 9, 1973), who is also an actress and also appeared in Sister Act 2 alongside her mother. She was also in a relationship with actors Frank Langella and Ted Danson . Goldberg announced that she has no plans to remarry. She is a grandmother of three. Goldberg announced that she had been a drug addict for a number of years. Goldberg has reading and writing problems. She currently lives in New Jersey. 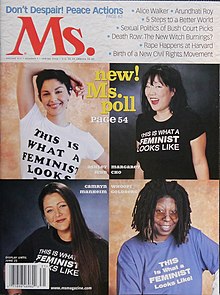 Whoopi Goldberg (bottom right) on the cover of Ms. Magazine in spring 2003 as part of the “This is what a feminist looks like” campaign

In 1999 Goldberg received the Vanguard Award from the Gay and Lesbian Alliance Against Defamation for her dedicated support to the gay community.

On September 17, 2003, she was appointed UNICEF's Goodwill Ambassador .

In all films - except Ghost - Message from Sam and a few guest appearances in Raumschiff Enterprise - The next century - the German actress Regina Lemnitz lends her her voice over .

Goldberg has been campaigning for cannabis legalization for years and has been selling medical cannabis products for menstrual cramps since April 2016. Goldberg says she was inspired to get into the cannabis business by "living in difficult times and the fact that cannabis was literally the only thing that gave me relief".