In 1955 ending occupation in Austria , the German Democratic Republic and the Federal Republic simultaneously the two German States with the establishment of the Warsaw Pact and the inclusion in the NATO firmly embedded in the blocks.

In Montgomery , Alabama , African American Rosa Parks is arrested for refusing to vacate her seat on the bus for a white male passenger. The subsequent Montgomery Bus Boycott marked the birth of the black civil rights movement in the United States .

The last sentence of the “Mainau Declaration” on the Otto Hahn monument in Berlin-Dahlem, Altensteinstr. 48 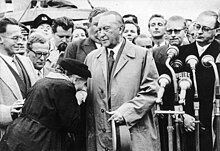 The mother of a prisoner of war thanks Konrad Adenauer after his return from Moscow, September 14, 1955.

Founding party convention of the LDP

Flag of the Council of Europe / Europaflagge

A Nobel Peace Prize was not awarded.