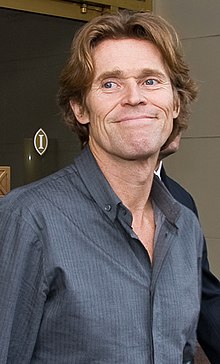 Willem Dafoe at the International Film Festival in Toronto in 2009

Willem Dafoe is the second youngest of eight children born to a surgeon and a nurse. He says he has German , English , Irish , Scottish and French roots. Dafoe began acting as a teenager and at the age of 17 went to the University of Wisconsin-Milwaukee to study drama. The lessons soon became too theoretical for him, however, and he joined the experimental Theater X , with which he soon toured Europe and the United States.

In 1977 he moved to New York and became a member of the Wooster Group , of which he is still a member. The head of the ensemble, Elisabeth LeCompte , became his partner. In 1982 their son Jack was born. In 1981 he played his first role after all the legendary Western-flop Heaven's Gate by Michael Cimino . Dafoe's first success came five years later with the role of selfless sergeant Elias in Oliver Stone's Vietnam drama Platoon , for which he received an Oscar nomination for best supporting actor.

Dafoe is known for a wide range of roles that are difficult to classify. He played purely evil, predominantly eccentric characters in Wild at Heart , Speed ​​2 - Cruise Control or Spider-Man , and the hero in Platoon and Mississippi Burning - The Root of Hate . Martin Scorsese's drama The Last Temptation of Christ , in which he played the role of Jesus , was also controversial . He had often played an obsessed outsider in his roles, but in 1993 he also appeared as a soft character actor in Paul Schrader's Light Sleeper . One of his most successful roles is also the portrayal of Max Schreck in E. Elias Merhige's Shadow of the Vampire , for which he a. a. was nominated for an Oscar and a Golden Globe for Best Supporting Actor. His work includes more than 100 productions.

In 2007, he was a member of the jury of the Berlin Film Festival, chaired by US filmmaker Paul Schrader . For his leading role in Lars von Trier's psychological thriller Antichrist , he was awarded the Danish Bodil in 2010 . In 2012 he was on stage at the Teatro Real in Madrid with the Serbian performance artist Marina Abramović . He also played the role of "Nathan Dawkins" in the video game Beyond: Two Souls from Quantic Dream , developers of Heavy Rain .

Dafoe received his third Oscar nomination in 2018 for the supporting role of social motel manager Bobby in Sean Baker's The Florida Project (2017). His involvement in the drama brought him numerous other awards, including awards from the Boston , New York and Los Angeles Critics' Associations , as well as the National Board of Review and National Society of Film Critics . Also in 2018 he was awarded the Honorary Golden Bear at the 68th Berlin International Film Festival . In January 2019, he received his fourth nomination for an Oscar for his portrayal of the painter Vincent van Gogh in the biography Van Gogh - On the Threshold of Eternity .

Dafoe has only had permanent German speakers since the late 1980s. From then on and in the 1990s it was spoken primarily in roughly equal parts by Randolf Kronberg , Wolfgang Condrus and Manfred Lehmann ; Reiner Schöne Dafoes has been practically the only regular speaker since 2002 .