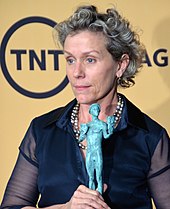 Frances McDormand with a SAG Award (2015)

The Screen Actors Guild Award (also abbreviated as the SAG Award ) is a film and television award that is presented annually by the American actors' union Screen Actors Guild (SAG). You have to be a SAG member to work as an actor in the United States. All members of the actors' union are entitled to vote. The last award so far took place on January 19, 2020 in Los Angeles.

The Screen Actors Guild Awards are presented in a joint ceremony in currently 15 different categories (six in the film sector and nine in the television sector ). The winners receive the so-called “actor” statuette, which depicts a man with a laughing mask in one hand and a sad mask in the other.

The Shrine Exposition Center in Los Angeles , the permanent venue for the awards since 1997

The Screen Actors Guild , which was founded in 1933, first presented the Life Achievement Award in 1962 to honor actors for their life's work and services to the Screen Actors Guild. The former SAG President Eddie Cantor was the first winner . The first regular presentation of the Screen Actors Guild Awards took place on February 25, 1995 at Universal Studios in Universal City . The so-called “actor” statuette was also presented for the first time. The four film and eight television categories awarded at the time also included an ensemble category each for drama and comedy series, in which each leading actor involved was recognized. At the second award almost exactly a year later, such an ensemble category was also introduced for films.

For the second award in 1996, the event moved to the Santa Monica Civic Auditorium in Santa Monica . Since 1997 the SAG Awards have been held regularly at the Shrine Exposition Center in Los Angeles . For the 14th award ceremony in January 2008, two new categories were created for the stunt ensemble of a film or series. The total number of categories rose to 15.

In March 2012, the Screen Actors Guild merged with the American Federation of Television and Radio Artists (AFTRA) to form SAG-AFTRA . For the award ceremony in 2018 , a presenter was appointed for the first time, Kristen Bell .

In German-speaking countries showed free TV transmitter cable one for the first time in 2003, the highlights of the ceremony. The highlights have been broadcast on the pay TV channel TNT Serie since 2012 .

Comparison with the Oscar

Since the Screen Actors Guild Awards were first presented in 1995, there have been regular matches with the future Oscar winners in the four actor categories . The winners in these categories agreed in 75 out of 104 cases (72 percent) up to and including the 2020 award ceremony . In the first year three of the four awardees were equal. There have been the same winners in all four categories in seven years (2005, 2010–2011, 2014–2015, 2018 and 2020). In contrast, only in 2002 was there no agreement in any category.

The most accurate is the category for the best male leading role , in which only 5 of the 26 award winners later failed to win the Oscar in this category. With 12 uninterrupted matches, there was the longest series of all four categories from 2005 to 2016. The leading ladies voted so far 7 in the Supporting Actor interior 8 as well as the supporting cast does not match 9 winner.

There is no Oscar counterpart for the Best Acting Company category ; instead, it is often compared to the award for best film . In this comparison, the winner agreed in 12 out of 25 cases so far. With Braveheart (1995), Shape of Water (2017) and Green Book - A Special Friendship (2019), there are three films that have been recognized as best film without first receiving at least one nomination for best acting ensemble to have.

So far, with Shakespeare in Love (1998), only one film has been nominated in the five most important film categories; but he could only prevail in two. Accordingly, no film has yet managed to win awards in all categories. They also received five nominations, including two each in a category, Chicago (2002) and Faith Question (2008). With three wins each, American Beauty (1999), Chicago , The Help (2011) and Three Billboards Outside Ebbing, Missouri (2017) share first place. This is followed by a total of 15 films with two prizes each.

The most successful film actors include Mahershala Ali , Daniel Day-Lewis , Colin Firth and Geoffrey Rush , each with three SAG awards. With these three wins, Day-Lewis also tops the ranking for the best male lead. Only Mahershala Ali has received two awards for Best Supporting Actor. Among the film actresses, Cate Blanchett , Viola Davis , Allison Janney , Frances McDormand , Helen Mirren , Octavia Spencer , Emma Stone , Renée Zellweger and Catherine Zeta-Jones are nine people with three awards each. McDormand and Zellweger top the list for best female leading role with two wins each, while Kate Winslet is the only one to have been honored twice as best supporting actress.

With a total of 16 mentions, ten of them as the leading actress, the American Meryl Streep is the most thoughtful person in the field of film. She is followed by the Australian Cate Blanchett and the British Judi Dench with 14 and 13 nominations respectively.

The most successful television actor is Alec Baldwin , who won eight SAG awards for his role as Jack Donaghy in 30 Rock . This is followed by Anthony Edwards with six awards for his portrayal of Dr. Mark Greene in Emergency Room and Tony Shalhoub as Adrian Monk in Monk and as Abe Weissman in The Marvelous Mrs. Maisel . The television actresses Julia Louis-Dreyfus nine SAG Awards for her portrayal of Elaine Benes in Seinfeld and Selina Meyer in Veep - The Vice President of the most successful actress. This is followed by Julianna Margulies at eight for her roles as Carol Hathaway in Emergency Room - Die Notaufnahme and as Alicia Florrick in Good Wife, as well as Uzo Aduba (as Crazy Eyes in Orange Is the New Black ), Edie Falco (as Carmela Soprano in The Sopranos ) and Tina Fey (as Liz Lemon in 30 Rock ).

With a total of 22 mentions, 14 of them in the actor categories, the American Edie Falco is the most thoughtful person in television. She is followed by the Americans Julia Louis-Dreyfus at 21 and Julianna Margulies at 19 as well as the Frasier leading actors David Hyde Pierce and Kelsey Grammer , both US Americans, with 18 nominations each.