This article covers the city in the United States. For identical places see Santa Mónica .

Santa Monica is a city in the west of Los Angeles County in the US state of California on the Pacific Coast . It is located in Santa Monica Bay , south of Pacific Palisades , Malibu and Brentwood , west of Westwood and Sawtelle, and north of Venice . In 2010 the city had 89,736 inhabitants ( 2010 census ). For 2013 the estimate is 92,470 inhabitants. The city is named after Monika von Tagaste , who is venerated as a saint in the Catholic Church.

Northwest of Santa Monica are the Santa Monica Mountains , a mountain range rising up to 948 meters. Except on the Pacific coast, the city is surrounded on all sides by the metropolis of Los Angeles .

The best way to get to Santa Monica is via Los Angeles International Airport, which is about 10 km south, or with the Expo Line of the Los Angeles Metro Rail directly from downtown Los Angeles .

The city of Santa Monica, initially founded as a small Spanish settlement, became Mexican from 1828 to 1848, only to become American. The town, which had fewer than 3,000 inhabitants around 1900, was expanded by businessmen John Percival Jones and Robert Baker in 1875. The rectangular settlement was then bordered by Ocean Avenue on the coast, Montana Avenue in the northwest, Colorado Avenue in the southeast and inland by 26th Street. Summer residence lots on the first line of the beach were sold for $ 300. Behind it, on Second Street, were the first stone buildings. The oldest house still preserved today is the Rapp Saloon, in which the German-born William Rapp ran the “Los Angeles Beer Garden”. Robert Baker had a 27-kilometer-long railway line built between Los Angeles and Santa Monica in just ten months, which enabled the town to expand rapidly. In 1887, the Arcadia Hotel opened, which at the time was the finest beach establishment in Southern California. In the years to come, Santa Monica developed into a bathing and entertainment destination for the greater Los Angeles area. The main attraction was the Santa Monica Pier. 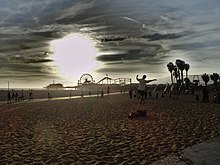 The Santa Monica Pier , which was built in 1909, is one of the most famous attractions in the city. In addition to the small Pacific Park amusement park with roller coaster ( Santa Monica West Coaster ) and Ferris wheel, it also houses numerous restaurants and shops. In the Looff Hippodrome building, at the beginning of the pier, there has been an old horse carousel since 1947. The entrance to the pier on Ocean Avenue is a white and blue gate that is illuminated with neon lights at night .

The Third Street Promenade , with approximately 400 meters in length, one of the few pedestrian areas in the greater Los Angeles area , covers three blocks between the mall Santa Monica Place and Wilshire Blvd. Its proximity to the Santa Monica Pier makes it a popular spot for tourists and locals alike. In the evenings, many street performers entertain visitors along the three-block shopping area. The south end of Third Street Promenade is completed by the Santa Monica Place shopping mall , designed by Frank Gehry .

The "Rapp Saloon" is located in the parallel street, Second Street. After the city was founded, William Rapp, of German descent, ran the "Los Angeles Beer Garden" in the one-story house; later the town hall was temporarily housed here. The small building is the last remaining house from the founding year 1875 and today one of the landmarks of Santa Monica.

Health care is provided by two hospitals, both of which are undergoing a multi-year renovation phase. The Saint John's Health Center was named the best municipal hospital of the American West Coast. The nearby UCLA Medical Center , a former city hospital, is now a branch of UCLA's University Hospital in Westwood , which is one of the top 10 US hospitals.

The largest local church is the Roman Catholic St. Monica Catholic Church at the intersection of 725 California Avenue and 7th Street. The services are broadcast as a live stream on the Internet. There are, however, many other churches as well.

The following table lists the population of Santa Monica since 1880, according to the results of the 1880-2010 census by the United States Census Bureau :

Santa Monica is a city independent of Los Angeles and therefore has its own administration and police force. In Santa Monica there are therefore numerous regulations that differ from those in Los Angeles. Pedestrians are prohibited from crossing the streets away from pedestrian crossings or traffic lights.

Due to the proximity to the film industry, locations of Santa Monica appear again and again in a wide variety of films. The entrance to Santa Monica Pier was a turning point for Forrest Gump on his travels across the United States. On the pier is a restaurant owned by the Bubba Gump Shrimp Company , which was inspired by the movie. The horse carousel on the pier was the scene of a chase and shootout in The Net . A BigBlueBus from the public transport company was Speed's arena . One scene in Terminator 2 took place at the Santa Monica Place mall. The Baywatch TV series was partly played on the beach and on the pier in Santa Monica.

In the Wii U game Lego City Undercover, there is a reference to the Santa Monica Pier in the Paradise Sands district.

The British band The Sweet released the song Santa Monica Sunshine on their first album Funny How Sweet Co-Co Can Be in 1971 .

Santa Monica has twinned cities with the German city of Hamm ( North Rhine-Westphalia ) and the Hechuan district of the city of Chongqing , People's Republic of China .

→ Main article : List of sons and daughters of the city of Santa Monica

Personalities with a relationship to the city