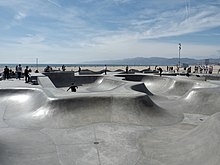 Venice is a district in the west of Los Angeles , which is known for its Venice -inspired channels, the beach life in Venice Beach and some artistic activities. Venice lies between Santa Monica to the north, Mar Vista to the east and Marina del Rey to the south.

The “Venice of America” was founded by Abbot Kinney (1850–1920), a New Jersey- born cigarette maker, as a seaside resort with Italian-inspired channels. Kinney and a partner had already bought a two and a half kilometer long and 300 meter wide coastal strip in southern Santa Monica at the end of the 19th century . Here he built a pier, a golf course , a horse racing track , laid out a beach promenade and transformed the area into a beach resort, which was named Ocean Park. The district of Santa Monica, located between Santa Monica Pier and Venice, still bears this name today. After the death of his partner, the land ownership was divided and Kinney received the southern, more swampy coastline. With a city planner and landscape architect from Boston, Kinney came up with the idea of ​​a city with canals, Venetian-style houses, gondolas and amusement facilities. The site was accessible from Los Angeles by electric tram from September 1904 , and on July 4, 1905, the new resort opened. A narrow-gauge railway circled the entire site for a two-and-a-half mile stretch . Kinney abandoned the plan to present cultural offers due to a lack of visitor demand. Instead, a roller-skating rink was added and a dance hall for one and a half thousand people was built on the pier, an aquarium in 1909 and, in the years that followed, after various extensions to the pier, a carousel , a Japanese tea house, a restaurant and a roller coaster where those looking for amusement ride in a boat water-filled canal. Together with the even larger "million dollar pier" of its competitor, Alexander Fraser, Santa Monica attracted tens of thousands of visitors on some weekends at the beginning of the twentieth century as a leisure and entertainment center for the greater Los Angeles area.

In 1911 the place gained its independence from the neighboring city of Santa Monica. Since Venice was easily accessible from the nearby metropolis of Los Angeles with the light rail of the Pacific Electric Railway along what is now Venice Boulevard , it soon developed into a popular attraction. With the introduction of Prohibition in 1920, however, the young city's most important source of income ceased and in the following years the canals began to deteriorate again due to insufficient entertainment . Most of the canals were filled in again in 1929 and replaced by roads. In November 1925, residents decided to join the city of Los Angeles. The incorporation came into force in 1926. Between 1930 and 1980 oil was produced in the place .

In the decades that followed, Los Angeles did not do much to support the seaside resort that was now one of its numerous suburbs. For example, the promenade began to deteriorate. At the same time, rents fell, so that in the post-war period numerous artists, but also survivors of the Holocaust, moved to Venice. In the 1960s and 1970s, Venice was a hub of California bohemian , alternative culture , and street art . The 1969 Los Angeles Free Press Festival held in this context was canceled because of riots.

At the beginning of the 1960s, parts of the bank development and other roads were in great need of renovation. 550 houses, including one on central Windward Avenue , were then demolished by order of the city. The remaining canals were also only marginally maintained for over half a century. In 1992 and 1993, they were finally thoroughly restored and some of them laid out from scratch. As early as 1982, the canals of Venice were included in the US National Register of Historic Places . Today the Venice Canal Historic District is one of the most idyllic residential areas in Los Angeles.

Venice in the media

Venice in the film

Like many places in Los Angeles, Venice appears in numerous films. Some examples:

Venice is the headquarters of Snap Inc.