This article is about the band. For the album of the same name see The Red Hot Chili Peppers (album) .

Red Hot Chili Peppers (abbreviation: RHCP ) is a Founded in 1983, California radio - and alternative - rock band . She is one of the most commercially successful representatives of the crossover . Her album Blood Sugar Sex Magik is considered one of the most important of this genre.

School friends Anthony Kiedis (vocals), Michael "Flea" Balzary (bass), Hillel Slovak (guitar) and Jack Irons (drums) first appeared together on February 13, 1983 as "Tony Flow and the Miraculously Majestic Masters of Mayhem". At that time Flea, Slovak and Irons were playing in the already somewhat successful band “What Is This”. At the concert in the "Rhythm Lounge" club in Los Angeles , they surprised the audience with their song Out In LA with a mixture of rap , rock , funk and punk . The club owner was so impressed that he booked the band for the following week. The club was already full the next time they performed, as rumors of the new band had spread in Los Angeles. Soon afterwards the name Red Hot Chili Peppers arose, according to Kiedis a reference to classic American blues or jazz band names, in which elements such as "Red Hot" or "Chili" often appeared (e.g. Jelly Roll Morton's Red Hot Peppers ).

The new band quickly got other appearances in the area and released the debut album The Red Hot Chili Peppers in August 1984 , which was produced by Andy Gill ( Gang of Four ). Andy Gill favored a radio compatible sound in contrast to the band, which led to difficulties in working together. Slovak and Irons left the band before recording began, their old band "What Is This?", With which they had continued to rehearse, also had a record deal. They were replaced by Cliff Martinez (drums) and Jack Sherman (guitar). With Sherman there were always conflicts because he had a different lifestyle than the other band members. After Sherman left the band, Slovak got back as a guitarist.

The next album Freaky Styley was produced with the famous funk musician George Clinton . Maceo Parker and Fred Wesley  - brass in James Brown's band - also took part in the recording  . The following album The Uplift Mofo Party Plan was a lot more successful than Freaky Styley . It is the only studio album that was recorded in the original line-up, as Jack Irons played drums again. It was recorded with producer Michael Beinhorn .

At that time, both Kiedis and Slovak were addicted to heroin. In June 1988, shortly after the band returned from a European tour, Hillel Slovak died of a heroin overdose . The shocked Jack Irons then left the band on the grounds that he did not want to participate in something that would kill his friends. Anthony Kiedis was deeply affected by the death of his best friend - he had a similar lifestyle - and took a short break. He went to rehab and abstained from drugs for five years.

Kiedis and Flea performing in Amsterdam in 1989

Kiedis and Flea decided to continue with the band. The new members were the previous Funkadelic guitarist DeWayne 'Blackbyrd' McKnight and Dead Kennedy's drummer DH Peligro . However, this combination did not harmonize, which is why they soon started looking for musicians again. As a huge fan of the band, 18-year-old John Frusciante was able to play many of their songs superbly. He took over Slovak's part in 1988. Chad Smith joined them as drummer. His drumming fit perfectly into the structure, whereas his personal chemistry was initially wrong.

With the new line-up, the band - again with Michael Beinhorn - recorded Mother's Milk in 1989 . This achieved gold status in the USA and made the Peppers stars. Their final global mainstream breakthrough came in 1991 with Blood Sugar Sex Magik , which they recorded with producer legend Rick Rubin . With this, the group produced five more albums.

During the tour of the very successful album Blood Sugar Sex Magik , John Frusciante got out on May 7, 1992 in Japan . He hadn't expected such a huge commercial success and preferred to play in front of smaller audiences. In the following years he too became addicted to heroin and increasingly isolated himself from his environment. He released two solo albums. The band couldn't find a suitable guitarist for a long time until Dave Navarro ( Jane's Addiction ) joined them in early September 1993. In 1995 the album One Hot Minute was recorded with him. His preference for the wah-wah pedal resulted in a significantly different sound on this record. However, the album did not sell as well as its predecessor. Looking back on this phase, the band describes their songwriting work at the time as unsatisfactory and unsuccessful - Navarro had a different way of writing songs, he didn't like jam sessions ; besides, Anthony Kiedis had started using heroin again, and Navarro was also using drugs. Several songs were written by Flea to get enough pieces together for the album. In Pea you can only hear Flea with bass and vocals. At the beginning of April 1998 Navarro left the band because the remaining members no longer wanted to work with him because of his drug addiction. 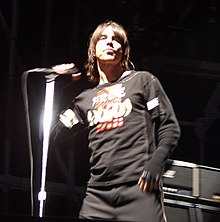 In early 1998, John Frusciante was able to get rid of his drug addiction with the help of his friends Johnny Depp and Flea. During his dependency, Flea was the only one in the band who kept in touch with Frusciante. After a successful jam session, Frusciante got back in at the end of April 1998. Together, the Red Hot Chili Peppers recorded the album Californication in Fleas Garage in 1999 , which was by far the band's most successful commercial album. By this point, Kiedis and Flea had also left their drug addiction behind; Since then, they say they are vegetarians and abstain from alcohol and nicotine . On the tour that followed the album, they played the legendary Woodstock gig in 1999 and in Moscow in front of 200,000 spectators on Red Square .

After two years of world tour, the band recorded the album By the Way , which was released in 2002. It was less funky, apart from songs like Can't Stop , it contained more melodies and harmony chants from Frusciante and Kiedis.

At the end of July 2004, the live album Live in Hyde Park was released, which, in addition to the two new songs Leverage of Space and Rolling Sly Stone, also includes cover versions of the 1970s hit Brandy by Looking Glass and Black Cross by 45 Grave, as well as a drum Homage from Chad Smith included. It was a combination of three concerts that took place on June 19, 20 and 25, 2004 in London's Hyde Park . In addition, the Red Hot Chili Peppers gave concerts at Rock am Ring , Rock im Park , at the Aerodrome in Wiener Neustadt , in the Prinzenparkstadion in Paris and in the Amsterdam Arena .

In 2004 Anthony Kiedis' autobiography Scar Tissue was published . In it he reports about the band, inspiration and the making of certain songs, experiences with drugs, sex and music and about his companions.

The ninth studio album Stadium Arcadium was released on May 5, 2006 as a double album. It went straight to number 1 on the charts. The first single was Dani California (by A. Kiedis, Flea, J. Frusciante, and C. Smith), released April 28th. On April 24th, the band presented the new album to around 500 invited guests at an unannounced gig in Hamburg's “tent of the flying buildings”.

The Red Hot Chili Peppers played 151 concerts and festivals in over 20 countries on the Intercalactic Tour, which lasted from April 2006 to August 2007. They played at the Roskilde Festival in Denmark, the PinkPop Festival in the Netherlands, the Coachella Valley Music and Arts Festival in California, the Fuji Rock Festival in Japan, the Hallenstadion Zurich in Switzerland and on the Live Earth Concert in July at London's Wembley Stadium .

After the Stadium Arcadium tour ended, the band retired for a year and a half. During this time, Chad Smith and the supergroup Chickenfoot released their debut album of the same name. Flea studied jazz and Kiedis devoted himself to his private life.

In the fall of 2009, the band reunited and started working on a new album. At the end of 2009 it was announced that guitarist John Frusciante had left the band a year earlier. As a reason for his decision, he gave his personal development as a person and musician in recent years. In the future he wants to devote himself exclusively to his solo projects. He was succeeded in early 2010 by Josh Klinghoffer , who had previously worked with the Red Hot Chili Peppers, and in particular with Frusciante. On January 29, 2010, the first live performance took place in the course of a Neil Young Tribute event at MusiCares.

On August 22nd, 2011, the first official stream online release party for the new album I'm with You took place, with the broadcast breaking down several times due to the high demand. The album with 14 tracks was released in Germany on August 26, 2011. The first single The Adventures of Rain Dance Maggie was released in advance on July 18, 2011. On August 30, 2011, the album was presented exclusively at the E-Werk in Cologne . The concert was recorded in HD quality and broadcast on the same evening in over 900 cinemas in 39 countries worldwide. In Germany, the broadcast took place in all UCI KINOWELTEN and in selected CinemaxX cinemas. Another European tour was planned for 2012.

The group's eleventh studio album, The Getaway , was released on June 17, 2016 . The singles Dark Necessities and The Getaway were released in advance . A European tour followed the release of the album.

Twelfth studio album and re-entry by Frusciante (since 2018)

The work on a new album was announced in September 2018, the release was planned for 2020. Admission was delayed due to the 2018 California wildfire . The band held a charity show for victims of the fires on January 13, 2019.

On December 15, 2019, the Red Hot Chili Peppers announced that Josh Klinghoffer had left the band and that John Frusciante was back on the band’s guitar.

Cooperation with other artists

The band contributed a cover of " Let the Good Times Roll " to George Clinton's 2008 album GEORGE CLINTON AND HIS GANGSTERS OF LOVE .

The Red Hot Chili Peppers donate money to the Sea Shepherd Conservation Society for living beings in the world's oceans. They also support their sister organization Sea Shepherd Global by showing videos of their campaigns at the Australian Big Day Out Festival and calling on the fans to support Sea Shepherd. They also invited all Sea Shepherd Switzerland volunteers to one of their concerts and posted a photo of themselves with a Sea Shepherd towel on Instagram .