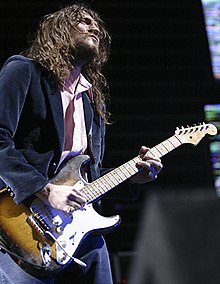 John Anthony Frusciante [fru'ʃɑnteɪ] (born March 5, 1970 in Queens , New York ) is an American guitarist. From 1988 to 1992 and from 1998 to 2008 he was guitarist and accompanist for the Californian band Red Hot Chili Peppers . In December 2019 the band announced that John Frusciante was part of the band again.

John Frusciante was born in 1970 to Gail and John Frusciante Sr.'s only child. His mother was a promising singer, but remained a housewife because her husband ruled out a musical career on her part. John's father, a lawyer , played the piano for a long time. After moving to Tucson , Arizona , the family lived in Florida for a year . During this time, John was six years old, the parents separated. He liked it very much in Santa Monica , where he lived for the next few years, as much of the rock and punk scene took place there. His stepfather, who listened to Beethoven and 1950s rhythm and blues , supported John in his artistic development. During his school days, John developed an enormous ambition for playing guitar. According to his own statement, he practiced up to fifteen hours a day and dealt with music theory. He recorded his first own songs at the age of fourteen. John Frusciante was also a student at GIT , but stayed away from class most of the time and never graduated from school.

At the age of 15, John Frusciante was enthusiastic about the Red Hot Chili Peppers. He had rehearsed all of the lyrics, guitar and bass riffs of their songs. When he moved to Hollywood in 1988 , he met the former Dead Kennedys drummer DH Peligro at a session there , who made contact between Frusciante and the "Chilis". After the death of their guitarist Hillel Slovak on June 25, 1988, Frusciante was accepted into the band. Their first joint album Mother's Milk was already successful, with the album Blood Sugar Sex Magik the band made their commercial breakthrough. During the work on this album the band got into trouble. Frusciante reports that as early as 1991 he was thinking of leaving the band. He no longer felt able to cope with the increased pressure to perform as well as the increasing popularity of the Red Hot Chili Peppers, so he announced his departure on May 7, 1992 during the Japan tour. In fact, he left the band shortly thereafter and was later replaced by guitarist Dave Navarro .

During his time with the Red Hot Chili Peppers, Frusciante had increasingly used cocaine, and especially heroin . Increasing heroin addiction helped him leave the band in 1992. From 1993 to 1997 John hardly played the guitar in public and shifted his artistic expression to abstract painting, among other things .

Frusciante had recorded his own songs with the band over the years, mainly during the breaks to recordings of Blood Sugar Sex Magik . After leaving the Red Hot Chili Peppers, he released them in 1994 as a double album entitled Niandra Lades and Usually Just a T-Shirt .

Then Frusciante also wrote short stories and other songs, which were now significantly more influenced by his drug use. After the death of his good friend River Phoenix in October 1993, who died after one of his live appearances in Johnny Depp's club "Viper Room", Frusciante slipped even further into heroin addiction.

In February 1996, he narrowly escaped drug death; he then tried unsuccessfully to stop heroin use. In 1997 he released his album Smile From the Streets You Hold , not only to finance his drug use, but also to comply with the request of his friends who advised him to publish his music because there was no longer any good music ( including Johnny Depp ). This album also features two collaborations by Frusciante and River Phoenix - Height Down and Well, I've Been . The songs on the album were recorded at different times in his artistic work. There are songs from his youth like A Fall Thru the Ground as well as songs that didn't make it onto Niandra Lades and Usually Just a T-Shirt due to the length of the CD , like Smile From the Streets You Hold , or shortly before Recorded songs in which his troubled mental state is clearly expressed, such as Nigger Song or Enter A Uh .

After several unsuccessful attempts at withdrawal, Frusciante managed to overcome his drug addiction in early 1998. After his recovery, he returned to the Red Hot Chili Peppers.

Return to the Red Hot Chili Peppers and new success

In 1999 Frusciante was instrumental in the album Californication , which meant a comeback for the Red Hot Chili Peppers, who had been directionless after his exit. In 2001 he released his solo album To Record Only Water for Ten Days . In addition, he made additional material available free of charge on his website in the same year, which in the end resulted in a complete album entitled From the Sounds Inside . During the songwriting phase for the Peppers album By the Way (2002) he wrote pieces for his album Shadows Collide With People with Josh Klinghoffer . There are guest appearances by Flea , Omar A. Rodríguez-López and Chad Smith . Between the productions of his solo albums, John Frusciante composed pieces for the film The Brown Bunny by his friend Vincent Gallo .

In 2004 he released a series of six albums with the help of his friend Josh Klinghoffer , which were released at monthly intervals from the second half of the year and followed very different styles. The first, The Will to Death , has a rough sound and is reminiscent of the 1970s. John Frusciante makes little use of overdubs . On the second, The DC EP , he completely dispenses with the use of synthesizers. Inside of Emptiness follows a more rocky style. After that, very experimental and electronic music appeared under the title A Sphere in the Heart of Silence , which has quite complex structures, and on which Josh Klinghoffer is also represented. The fifth album in this series is an improvisation with Joe Lally , bassist from Fugazi , and Josh Klinghoffer. The three perform under the name Ataxia , the CD is called Automatic Writing . The acoustic album Curtains ends the series and musically follows on from The DC EP .

On May 29, 2007, the second part of Ataxia's 90-minute improvisation was released under the name AWII . Frusciante also announced that he would like to release two more albums with Klinghoffer. One would be more electronic music and the other would be based on classical music. Seventeen songs have already been completed.

The new solo album The Empyrean was released on January 30, 2009. The concept album contains ten tracks, including the cover Song to the Siren (originally by Tim Buckley ) and the instrumental title Before the Beginning , which is a new interpretation of the song Maggot Brain by the band Funkadelic . As on previous albums, Flea can be heard on bass. Josh Klinghoffer plays the drums . The album also features Johnny Marr , the New Dimension Singers and the Sonus Quartet . According to Frusciante, the CD was recorded between December 2006 and March 2008.

On December 16, 2009, John Frusciante announced on his official homepage that he had left the Red Hot Chili Peppers more than a year earlier in order to be able to devote himself exclusively to his solo projects. On his recommendation, Klinghoffer succeeded him as the band's guitarist. In May 2010, Frusciante published his solo single Here, air as a free download at the same location .

When the Red Hot Chili Peppers were inducted into the Rock and Roll Hall of Fame in 2011, Frusciante did not attend the celebrations despite being invited.

Occasionally he collaborated with other musicians who worked with electronically generated music. He released an EP with Venetian Snares under the name Speed ​​Dealer Moms and played as a guest in his wife Nicole Turley's band Swahili Blonde . In 2012 Frusciante released the EP Letur-Lefr , which combines elements of electronica , pop and hip-hop . In the same year the EP PBX Funicular Intaglio Zone was released .

In memory of his late friend and former Red Hot Chili Peppers caterer Wayne Forman, he released the song Wayne in April 2013, and the EP Outsides was released in August . In 2014 he produced the complete album Medieval Chamber for the Black Knights and brought in some vocals. He became a member of the "Kimono Kult" project, in which at the drive-in guitarist Omar Rodriguez-Lopez and Teri Gender Bender from Le Butcherettes also take part. In March 2014, he released his debut Hiding in the Light . In April 2014 his eleventh studio album entitled Enclosure was released .

In April 2015 he started the acid house project Trickfinger with the album of the same name. The following month he announced that he no longer wanted to produce music for public consumption. In November 2015, Frusciante announced that he would upload songs from the years 2008–13 to his Bandcamp and Soundcloud profiles.

On December 15, 2019, almost exactly 10 years after his second exit, the Red Hot Chili Peppers announced in a text message on their Instagram account that John Frusciante was back in the band and would replace Josh Klinghoffer, who had replaced him at the time . The news was confirmed a little later by drummer Chad Smith and bassist Flea, also on Instagram.

In his solo works, John Frusciante distances himself very much from the sound of the Red Hot Chili Peppers, makes extensive use of synthesizers , for example, and pursues a much more personal and experimental style.

Frusciante named his favorite guitarists Eddie Hazel from P-Funk , Robert Johnson , James Williamson from The Stooges , Snakefinger , D. Boon from Minutemen , Lightnin 'Hopkins , Leadbelly , Tom Verlaine , Danny Whitten from Crazy while recording Blood Sugar Sex Magik Horse , Zander Schloss and Dix Denney from Thelonious Monster. Most of all, Zoot Horn Rollo's guitar playing on Captain Beefheart's Trout Mask Replica influenced him. What these guitarists have in common for him is that they don't try to be cool, but that every note has a meaning. But the actors Harpo Marx and Robert De Niro were also among his role models. Through them he realized that you don't have to play a lot of notes very loudly to get your message across, because de Niro only speaks the most important things and does so with few facial expressions. Marx, on the other hand, expresses himself exclusively with noises and facial expressions, none of which are unimportant.

Since 1997 Frusciante toyed with the idea of ​​making electronic music. At that time he discovered styles like house , techno and jungle . In 2005 he was finally convinced by the "Analord" series by musician Richard D. James that it was possible to produce his own electronic pieces without the help of sound engineers, whereupon he bought devices such as synthesizers and drum machines and learned to work with them . When he took his first steps in electronic music, he mainly orientated himself on early acid house productions from the 80s, but was at the same time a big fan of more modern artists such as squarepusher and Venetian snares .

He was only able to realize this idea through his solo project in the field of acid house as a trick finger .

In a 2003 Rolling Stone list, Frusciante ranks 18th among the 100 greatest guitarists of all time . In a more recent list, it ranks 72nd.

In 2010, John Frusciante was voted the best guitarist of the last 30 years by listeners in a survey conducted by the British BBC radio station 6 Music .

His reputation as a guitarist has risen across Germany in recent years: PBX Funicular Intaglio Zone placed 99th in the official German sales charts of Media Control in week 39/2012 (longplay). Before that, he had already placed Shadows Collide With People in Germany Sales charts.