Fugazi is an American post-hardcore band from Washington

Fugazi comes from the Washington punk and hardcore scene of the 1980s. Soon after the breakup of his band Embrace in 1987, Ian MacKaye began recording new songs with Joe Lally and Brendan Canty. The band name is derived from the abbreviation Fugazi , which is an American slang term from the Vietnam War. Fugazi was an acronym for: "Fucked Up, Got Ambushed, Zipped In" and referred to a hopeless combat situation . The first Fugazi concert took place in September 1987 at the Wilson Center in Washington. During the first live appearances, a mutual friend, Guy Picciotto , who, like drummer Brendan Canty, had previously been active in Rites of Spring , often joined the band . At first he sang along on a few songs, but over time he became a permanent member. The first two EPs Fugazi (1988) and Margin Walker (1989) later appeared together on a CD under the name 13 Songs .

In the course of time Fugazi moved more and more away from the original punk style, the albums became more experimental, sometimes slower and more and more “carefully constructed”. The first gradual changes in this direction can be seen on the album In On The Kill Taker (1993). From then on, Fugazi sounded more “grown up” and more serious with each subsequent release. In spite of everything, angry, political and, above all, very socially critical elements remained, each song has its own distinctive elements. The attitude of the band members did not change, they stayed true to their "hardcore" path.

Handmade tickets for a Fugazi concert (2001)

In the following albums, Red Medicine (1995) and End Hits (1997), a further development was noticeable from the outside: The design of the record covers became more sophisticated. It created collages from photos that had nothing in common at first glance to each other; extreme close-ups were next to obvious trivialities, such as B. a bike in the snow without a saddle or broken toilet tiles that have been puttied with used chewing gum.

In 1999 the documentary Instrument was released, produced by Jem Cohen, who had accompanied the band from the beginning. The film consisted of concert recordings, interviews, private and studio recordings and the like. Fugazi himself provided the music for the film and appeared on an album of the same name.

On the 2001 album The Argument , it seemed like the band had developed again. Eight of the ten tracks were recorded with Jerry Busher as percussionist and an additional second drummer, which gave this LP its own sound. The cello recordings in the intro and two other songs came from Amy Domingues. The single Furniture + 2 , also released in 2001, contained three songs that could not be found on The Argument .

In early 2004 rumors spread that Fugazi had disbanded, but the group itself denied this. According to her own information, she was only in a resting phase when it came to studio projects. One of the reasons for this was that two band members had their own families at the time.

In the same year bassist Joe Lally began to burn twenty different live recordings from 1987 to 1999 on CD and to sell them on his own website. These CDs were not available in regular stores. These were recordings that were not edited afterwards in the studio.

Releases appear on the record label Dischord Records , whose founder is Fugazi member Ian MacKaye , who in earlier times gained fame with various Washington hardcore bands such as Minor Threat . The band uses the freedom of action provided by the non-commercial label to keep their concert prices low and to organize concerts without age restrictions. The band made various free appearances, e.g. B. a protest at the beginning of the 2nd Gulf War in 1992 in front of the White House in Washington.

Fugazi did without advertising for concerts and relied on word of mouth , concert tickets were initially only available at the box office and not in advance sales. However, on a tour in the USA, the tickets were also available through Ticketmaster . According to Guy Picciotto, this was made possible in order to give fans who do not live near the venues an opportunity to get tickets. According to Picciotto, Ticketmaster responded to the band's demands, kept entry prices low and occasionally only charged moderate fees. All types of merchandising items are avoided, for example there are no official T-shirts. The widespread T-shirt with the imprint "This is not a Fugazi-T-Shirt" is not authorized either. MacKaye got the manufacturer of the t-shirt to donate an amount equal to the license income the band would be entitled to to a charity. Despite everything, Fugazi is well known in the hardcore punk scene. For many other music groups in this scene, including Rise Against and Box Car Racer , Fugazi is a role model. 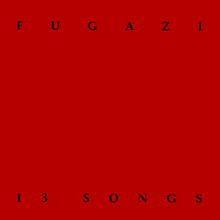