Ramones , a punk band from the very beginning

Punk [pʌŋk] (also punk rock or punk rock , even in English-speaking punk rock ) is a style of rock music , the mid-1970s in New York and London , along with the subculture of punk originated. After punk rock had established itself, different styles with their own subcultures emerged. At punk concerts, the pogo, a dance style that went well with the music, developed.

Punk-Rock is characterized by its trivial, simple, but not unoriginal compositions, which is aptly described by the catchphrase “three chords”. Punk bands typically use the traditional line-up of a rock band , consisting of one or two guitars , bass , drums and vocals . The sound is characterized by overdriven guitar amplifiers, high tempos and a rough, unmodulated singing voice. The texts are confrontational to aggressive, practice social criticism or convey political, philosophical and sometimes explicitly nihilistic content. The guitar parts are mostly limited to distorted power chords or barre chords , instrumental intros before the actual songs as well as pure instrumental pieces hardly occur. According to John Holmstrom, a cartoonist for Punk Magazine , punk rock was "rock 'n' roll by people who didn't have great skills as musicians but still felt a need to express themselves through music."

The punk subculture is determined by the rejection of bourgeois values ​​and social rules and the rebellion against them. Punk music in its original form was a raw and unpolished form of rock 'n' roll and thus distinguished itself from progressive rock, which was perceived as artificial, as well as from disco culture. Tommy Ramone said in this context: “In 1973 I knew that what is needed is pure rock 'n' roll without bullshit.” According to John Holmstrom, “Punk rock had to come because the rock scene had become so tame that acts like Billy Joel and Simon & Garfunkel were called rock 'n' roll, whereas for me and other fans, rock 'n' roll stood for wild and rebellious music. ”In addition, the subculture also rejected“ political idealism and California flower power silliness of the hippie myth ”, says music journalist Robert Christgau. Patti Smith, on the other hand, says in the documentary 25 Years of Punk that hippies and punks were linked by a common anti-establishment mentality. Some punk musicians rejected not only mainstream rock and the culture associated with it, but also the most popular protagonists in the music industry in particular. The Clash proclaimed : "No Elvis , Beatles or The Rolling Stones 1977" (No Elvis, no Beatles or Rolling Stones in 1977). 1977, the Summer of 77 associated with the heyday of the British punk scene, should be a year zero, both musically and culturally. In this sense, the song Punk 80 by the German band Artless, recorded in 1980 and dealt with retrospectively, also contained the lines: “We wanted to break new ground / we let old heroes stand”. 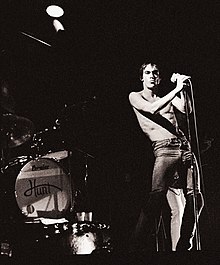 Iggy Pop , a godfather of punk

The musical origins of punk rock lay in the raw forms of rock 'n' roll of the 1950s, garage rock of the 1960s, American protopunk, and British glam rock and pub rock of the early 1970s. Influences range from the Stooges , whose singer Iggy Pop is sometimes referred to as the “Godfather of Punk”, to Roxy Music ; the Buzzcocks themselves called the experimental psychedelic rock of the German band Can . As a stylistically important influence, the band Neu! (“Punk before punk”), especially the piece Hero , which hits Neu! '75 was released and already contained all the essential elements of punk.

The term punk rock is first documented in a booklet written by Lenny Kaye for the Elektra Records compilation Nuggets: Original Artyfacts from the First Psychedelic Era, 1965–1968 . This garage rock sampler was put together by music producer Jac Holzman and Lenny Kaye, the guitarist and songwriter of the Patti Smith Group .

Garage rock bands from the pre-punk era played simple, mostly short songs, often uptempo cover versions of well-known songs. Lester Bangs wrote of the MC5's debut album, for example , that most of the pieces in their primitive three-chord structures are almost indistinguishable from one another. About half of the songs on the first Ramones album are shorter than two minutes and recorded in 4/4 time with the verse-chorus scheme usual in rock 'n' roll, the singing sounds more like screaming than singing. The following generations partly broke with these structures and new names were coined for their music.

The direct predecessor of punk rock was proto-punk with the extremely influential band The Modern Lovers of founder and lead singer Jonathan Richman , as well as the New York Dolls . Lou Reed with his band The Velvet Underground and the new wave / punk band Blondie , founded in 1974 by Deborah Harry and the songwriter and lead guitarist Chris Stein, are considered at least as influential .

Music manager Danny Fields is considered one of the godfathers of punk . Fields worked for Jac Holzmans Elektra Records from the late 1960s and took a.o. the still unknown MC5 and The Stooges under contract. The band MC5 from Lincoln Park, Detroit, founded in 1964, was one of the most important precursors of punk music and publicly propagated the style-forming creed of sex, drugs and rock'n roll . MC5 and The Stooges served as important and groundbreaking inspirations for the American and British punk movement of the 1970s. In 1975 Fields also discovered the Ramones, who dedicated the title "Danny says" to him on their album End of the Century in 1980 .

From 1974 the punk pioneers Alan Vega and Martin Rev from Suicide , as well as Richard Manitoba , Andy Shernoff and Ross Friedman appeared with their band The Dictators in New York's CBGB . The club founded by Hilly Kristal was the nucleus and scene meeting point for the new New York punk bands and is now a place of pilgrimage for punk rock.

Here punk rock and new wave legends like Tommy Ramone and Joey Ramone found their first opportunity to play in front of an audience with the lyrics by Ramones songwriter Daniel Rey. In 1975 the Ramones were discovered in the CBGB by Danny Fields and recommended to the founders of the Sire Records label , Seymour Stein and Richard Gottehrer . This took the Ramones under contract and released the Ramones debut album Ramones on Sire Records in 1976 . From then on, Seymour Stein and Gottehrer became producers of some bands from the CBGB environment and intensive promoters of the punk rock movement, including the punk legends The Dead Boys and Richard Hell and The Voidoids . Richard Hell was the first to create the typical punk look, consisting of a spiked hairstyle, torn T-shirt and black leather jacket - long before the Sex Pistols .

The Sex Pistols first appeared in November 1975. After a media-effective scandalous interview on the high-rated Bill Grundy show on English television in December 1976, punk also became known in Great Britain. This year bands like the Sex Pistols, Generation X , the Ramones, London SS and The Clash had their breakthroughs. In 1977 punk became a big media phenomenon and The Clash was signed to a £ 100,000 contract by major label CBS Records under the direction of legendary music manager Clive Davis . Before the punk in the UK really took off, and began directly to the sell-off.

The programmatic approach of simplicity, the self-image of the ingenious dilettantes as an affront to musical virtuosity, gave punk music a great boost in its early days, but subsequently led to musicians with little creative potential joining the movement. This was accompanied by commercialization and appropriation as a fashion trend. In the late 1970s and early 1980s punk split into different genres, some of which retained the aggressiveness of the music and the attitude and are still classified as punk, while others diverged so far from their origins that they were no longer be considered a sub-genre of punk. Basically, three styles can be distinguished in the following:

During this time, among other things, the Oi! , A style of music that also skinheads resonates, the hardcore punk , the anarcho-punk , the folk punk of the Pogues , the psychobilly and the gothic rock , the punk influences with Glam - and psychedelic rock mixed -elements, and death rock, which cannot be clearly separated from it . Some of the new varieties emerged because the old bands of the following generation were too commercial, too dominated by the major labels or not radical enough. Some bands turned to other genres of music, which led to a split in the scene and rivalries between the representatives of the different styles.

Influence on other styles

Influences of hardcore and anarcho-punk can be found in Thrash Metal , Crust - and Grindcore as well as Metalcore . In addition, grunge is considered a subgenre of punk, combined with traditional hard rock and heavy metal of the 1970s.