Anarcho-punk or peace-punk is the name of a type of punk music that emerged in Great Britain in the late 1970s . 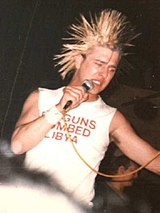 The anarcho-punk texts are radically anarchist and deal with criticism of the prevailing conditions, statements against racism , fascism , neo-Nazism and, in addition to calls for an autonomous way of life, feminism and animal rights .

The British group Crass , which also supported the scene with its label Crass Records , is considered the founder of the style . Some anarcho-punk bands such as The Blaggers or Oi Polloi were or are close to the Red and Anarchist skinheads or had skinheads as members.

Musically, anarcho-punk developed from '77 punk-rock or art-punk , bands like Crass developed from pure punk-rock bands with political aspirations to experimental post-punk , other bands like Conflict founded the hardcore Punk , in which its own anarchist sub-genres such as D-Beat (e.g. Discharge , The Varukers ) and Crustcore (e.g. Amebix , Antisect , Sacrilege ) emerged. Grindcore emerged in the 80s. a. Napalm Death and Extreme Noise Terror belong. Some bands like Chumbawamba developed towards folk punk , while still others like Leftöver Crack turned towards ska punk .

In the US, US anarcho-punk was founded by hardcore groups such as MDC and Reagan Youth , in Canada by DOA or Subhumans. In Germany, anarcho-punk also prevailed in the early 1980s in the form of groups such as Bluttat , Dark Days, Targets or Ätztussis and is usually interwoven with the autonomous scene . Mostly German-speaking anarcho-punk bands but rather under political German punk or political punk classified.

Media of the anarcho-punk scene include fanzines and distributors such as Profane Existence. There are also some associations or political organizations, such as small groups like CrimethInc. in the USA and North America as well as in France the Anarcho-Punk-Federation (APF) . Internationally, there is close cohesion and exchange among the groups and individuals involved, who are often also politically active.