The title of this article is ambiguous. Further meanings are listed under Bristol (disambiguation) .

Bristol [ ˈbrɪstɫ ] is a city, a unitary authority and a ceremonial county in south-west England on the River Avon . Bristol had a population of around 463,000 in 2018. Musically, the city created the Bristol Sound . 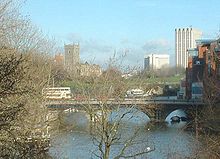 The town of Brycgstow ( Old English , the place by the bridge) already existed at the beginning of the 11th century and received one of the strongest castles in southern England under Norman rule . In the 12th century it became an important port city, especially for trade with Ireland . A new bridge was built in 1247 and the city expanded considerably. In 1373 it became a county . Bristol developed into the center of shipbuilding.

Until its dissolution in England under Edward I , the Knights Templar used Bristol as the main port for pilgrimages and for the export of wool to the continent, especially to La Rochelle in France . Various hallway and street names are still reminiscent of the not inconsiderable house and land owned by the Templars in Bristol, including Bristol Temple Meads station ("Templar Meadows").

In the 14th century, shortly before the arrival of the plague of 1348, Bristol was the third largest city in England after London and York, with around 15,000 to 20,000 inhabitants. The epidemic caused a prolonged population decline. However, the population remained stable in the 15th and 16th centuries and was between 10,000 and 12,000 inhabitants. In 1497, Bristol was the starting point for John Cabot's exploration of North America. In 1542 Bristol was granted city rights and the former Abbey of St. Augustine became a cathedral . During the Civil War from 1643 to 1645, Bristol was occupied and devastated by royal troops.

With the establishment of the English colonies in America in the 17th century and the slave trade in the 18th century, Bristol grew again. Alongside Liverpool , Bristol became the center of the slave trade. From 1700 to 1807 the port was visited by over 2000 slave ships, which carried over half a million people from Africa to America.

From 1760 Bristol fell behind its rival Liverpool . The trade war with France (1793), the ban on the slave trade (1807) and the missed connection to modern manufacturing processes caused Bristol to fall back economically. Even the construction of the floating harbor between 1804 and 1809 could not change anything. But despite all difficult circumstances, Bristol's population quintupled during the 18th century; In 1801 there were 66,000 people in Bristol. In 1838, Bristol was connected to the railway network by the Great Western Main Line planned by Isambard Kingdom Brunel .

Bristol suffered severe devastation from German air raids during World War II . The historic center near the castle was completely destroyed and is now a park with two bombed-out churches as memorials.

In 1980 there were violent clashes between young men, mostly from the British West Indies , and police officers in the St Paul's borough . One cause of the growing racial tensions at the time was the decline and neglect of the quarters of many British cities, including Bristol, which were mainly inhabited by ethnic minorities.

In the 20th century, Bristol became a hub for the aviation industry . The British Aircraft Corporation (now BAE Systems ) was significantly involved in the Anglo-French production of the Concorde and the whiz kid Harrier . The BAC founded a small car company called Bristol Cars Ltd. in 1945 . who builds exclusive sports cars with V8 engines. Another important company is Cameron Balloons , the world's largest manufacturer of hot air balloons . Bristol is also home to the well-known animation film studio Aardman Animations , which has enjoyed success with productions such as the Wallace & Gromit series, Creature Comforts , Chicken Run and the TV series Shaun the Sheep .

Bristol is the headquarters of the Environment Agency , the top environmental protection agency in England and Wales. 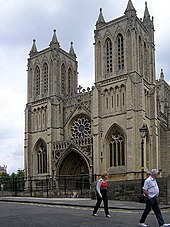 Wills Memorial Building , part of the University of Bristol

Every summer there is the Bristol Balloon Fiesta , one of the biggest hot air balloon events ever. In addition, Bristol is the recognized birthplace of trip-hop , which is mainly represented by artists such as Portishead , Tricky , Massive Attack and has found imitators all over the world. The Bristol-based animation studio Aardman Animations , which produces the Oscar- winning Wallace & Gromit films, among others . Bristol is the birthplace of actor Cary Grant , artist Damien Hirst and popular musician Nik Kershaw . The city is also associated with English Romanticism : Thomas Chatterton and Robert Southey were born here and Samuel Taylor Coleridge also lived in Bristol in the 1790s.

Bristol is considered to be one of the most beautiful cities in England , on the one hand due to the combination of proximity to the sea and hilly landscape, on the other hand because many of the old buildings were preserved or rebuilt despite the great destruction in World War II (e.g. Temple Church ). In addition to the city center with the waterfront directly at the harbor, where z. For example, with the @t Bristol, a whole complex of IMAX cinema (closed since March 31, 2007), technology museum, etc. was created, the two suburbs of Clifton and Redland in the northwest also attract many visitors because there are many residential buildings here of the 18th and 19th centuries can be admired. Also spectacular is the Clifton Suspension Bridge built by Isambard Kingdom Brunel , a suspension bridge that rests on two large stone pillars and crosses the deep gorge of the Avon at a height of 75 meters. A notable building in the 1970s, the Roman Catholic Cathedral of Clifton of the Diocese of Clifton .

Scattered across the city are some works by the graffiti artist Banksy , who was born in Bristol. Redland Train Station was decorated with Banksy-style paintings in 2009, depicting people dressed in Victorian style with modern accessories.

There are two football clubs, Bristol City and Bristol Rovers , which play in the Football League Championship and Football League One, respectively, and there are several amateur teams. Also located in Bristol are the rugby union club Bristol Rugby , the Gloucestershire County Cricket Club and the rugby league club Bristol Sonics . The city hosts a half marathon every year and Bristol hosted the 2001 World Half Marathon Championships.

The Bristol International Kite Festival is one of the big events.

The Llandoger Trow Pub is the pub where Alexander Selkirk met Daniel Defoe and told him his story.

The British television series Skins was shot in Bristol.

There are two main train stations. Bristol Temple Meads is southeast of the city center; trains to London , the Midlands and the South West stop here . Bristol Parkway is about three miles north in the suburb of Stoke Gifford; trains to Wales stop here . Bristol is at the intersection of the M4 (London - Wales) and M5 ( Birmingham - Exeter ) motorways . The small Bristol International Airport is located at Lulsgate .

The world's only test track for environmentally friendly solar trams is located in Bristol . The trams, which run on an 800-meter-long stretch of track, are made of super-light material and move with the help of solar power. The vehicles, which consist of a car with 76 seats, can reach a top speed of 40 kilometers per hour thanks to an electrically powered main motor. The first commercially operated eleven-kilometer line was to be built in 2007 in the Greek port city of Kalamata . There, however, a diesel engine was provided as support.

Bristol dialect Brizzle or Bristle called, is particularly from Bristol L in. An L is added after each vowel ending, resulting in Old English Brycgstow becoming Bristol.

→ Main article : List of sons and daughters of the City of Bristol