North Yorkshire [ ˌnɔːθjɔːkʃə ] is a county in the region of Yorkshire and the Humber in England . It is divided into the districts of Craven , Hambleton , Harrogate , Richmondshire , Ryedale , Scarborough and Selby .

North Yorkshire is home to two of England and Wales ' eleven national parks , namely the North York Moors National Park and most of the Yorkshire Dales . 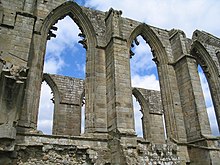