Devonshire is a redirect to this article. For the Devonshire title of the same name, see Duke of Devonshire .

Devon [ ˈdɛvn̩ ] (also historically Devonshire ) is a county in south-west England . The largest city in Devon is Plymouth , but its capital is Exeter . Devon is known for its picturesque coastal towns on the one hand and for the Dartmoor and Exmoor National Parks on the other . The geological age of Devon is named after the county . The name was introduced to scientific literature in 1839 by English geologists and paleontologists Roderick Murchison and Adam Sedgwick .

Plymouth and Torbay town councils are not subordinate to the county council and have sole jurisdiction over their territories. The management of Dartmoor National Park is also autonomous in the decisions that affect the park.

Devon was one of the first areas of England to be settled towards the end of the last glacial period. Dartmoor was already around 6000 BC. Inhabited by Stone Age hunters and gatherers .

In the Neolithic , from around 4500 BC. BC, the area was used for agriculture. The people of the so-called megalithic culture built the oldest monuments in England that still exist today from granite blocks . Over 500 archaeological sites have been registered in the moors: These are grave sites, rows of stones , stone circles and old settlements such as Grimspound . The rows of menhirs are particularly impressive: one is over 3 km long. Rows of stones mark a special place, for example a cairn , a stone circle or a special menhir.

The name Devon is derived from the Dumnonii , a Celtic people who inhabited the southwestern peninsula in Roman times. The Germanic peoples who settled England from the 5th century onwards did not initially venture into Devon. The Saxons are believed to have come to Devon in the 7th century. In 614 the King of Wessex attempted an unsuccessful invasion. The 7th century was marked by armed conflicts between Dumnonia and Wessex, and in 715 Wessex finally conquered the area. The kings of Dumnonia were able to free themselves again.

For the 9th century there are records of fighting between the Devonians and the "Welsh of Cornwall" although they both spoke the same language. William of Malmesbury later wrote that the British and Saxons inhabited Exeter together aequo iure (as equals) around the year 927 .

In the 9th century Devon was no longer threatened by the Corners, but rather by the Vikings , who raided the peninsula at sporadic intervals.

Devon was the site of some of the most violent and bloody fighting in the British Isles in the Middle Ages. In 1072, with the help of the Anglo-Saxons, the Normans conquered what was then Corn Wales and made it subject to them. William the Conqueror besieged Exeter for 18 days. In 1140, both Exeter and Plymouth were used as leverage against King Stephen , and many skirmishes also took place during the Wars of the Roses .

In 1497, Exeter was besieged again by Perkin Warbeck . The Prayer Book Rebellion of 1549 started in Devon, and in the English Civil War Exeter and Dartmouth were again besieged. In 1546 Devon was struck by the plague .

In 1606 the winter was so harsh that the rivers froze. It appears to have been the toughest winter the county has ever seen. The winter of 1676 was also recorded in the history books as particularly hard. 1688, the invasion of began William of Orange in Brixham , after which his army through Devon and Wiltshire moved to London.

During the 1640s, 1710s and 1760s the region was hit by measles epidemics. On October 7, 1690, an earthquake struck near Barnstaple , followed by a cold winter in which countless people were killed.

In the 1880s it was hot and the summers were dry, so harvests were very poor. Mainly agricultural Devonian suffered from the heat and people went hungry.

Since ancient times there has been a rich production of tin and copper in Devon in addition to agriculture. From the 18th century mines were built that were exploited industrially, for example the largest copper mine in the world, the "Great Consols Mine" near Tavistock .

However, the Industrial Revolution did not take place in Devon until the beginning of the 20th century. As elsewhere, this brought about great social changes. Agriculture and fishing are still the most important industries, but tourism is particularly encouraged . The Great Western Railway was already in operation in the mid-19th century.

During the Second World War took place in the Slapton Sands , a beach between the villages and Torcross Slapton exercise Exercise Tiger instead. At the end of 1943 the British government had decided to set up a training site for the Normandy ( D-Day ) landing , and designated Slapton Sands for this. Approx. 3,000 residents of the Slapton area were relocated for this. Communication and coordination problems led to a disaster. American soldiers were accidentally shot at from British ships, and the German Navy attacked the soldiers with speedboats under the command of Bernd Klug . 946 US soldiers were killed in this way. Today, memorial stones commemorate the dead.

For some time now, the traditional Devonian language, Cornish , has been spoken again.

In 1976, the Devon County Council has been awarded the European Prize awarded for his efforts in the European integration idea.

As in Cornwall, Devon’s economy is largely based on traditional professions: fishing, agriculture and mining. To compensate for this disadvantage, Devon was included in the economic development programs of the European Union (status 2).

The foot-and-mouth disease epidemic of 2001 had devastating consequences for the livestock industry, which is important in the area.

Despite all its problems, Devon is attractive to service and financial firms. In particular, the area around Dartmoor is experiencing an increase in population.

In addition to the traditional and emerging sectors of the economy, tourism is growing in importance and the Devonian administration is doing a lot to maintain the attractiveness of the countryside and coastal towns. The focus of tourism is the so-called "English Riviera" with the towns of Torquay , Paignton and Brixham . 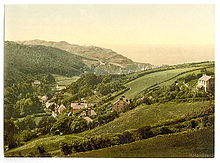 Devon is 6703.43 km 2, making it one of the largest counties in Great Britain. Over a million people live in Devon. It borders Cornwall to the west, Somerset and Dorset to the east . The highest point in Devon is at 621  m ASL . Devon has over 500 km of coastline, including some of England's finest beaches (e.g. Blackpool Sands and Slapton Sands near Strete and Torcross, not far from Dartmouth ).

Lundy Island is located in the northwest of the district and forms its westernmost land mass.

Devon is known for the widespread "Old Red" sandstones and limestone in the north of the county. The English geologists and paleontologists Roderick Murchison and Adam Sedgwick called the geological age between the Silurian and the coal-bearing carbonic system, of which these historically ancient deposits consist, Devon . This geological period began 416 million years ago and ended 359 million years ago.

Devon's inland is very rural and a popular holiday destination for many Britons. The area is particularly interesting for ornithologists , and some days, in some areas, over a hundred different species of birds can be seen in a day. There are deer in Exmoor National Park.

Eating and drinking in Devon

A national dessert of Devon is the so-called Devon cream tea . Here you can eat scones , clotted cream and jam with tea .

Towns and villages in Devon

Devon is home to over a million people. The main cities in Devon are