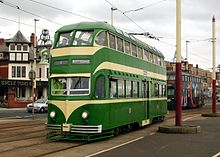 A tram in Blackpool

Blackpool [ ˈblækpuːl ] is an English coastal town on the Irish Sea . Blackpool was traditionally part of the county of Lancashire , but on April 1, 1998, it became an independent - territorial - body ( Unitary Authority ).

Blackpool has three piers , the north was built in 1863, the middle in 1868 and the south in 1893. The 158 meter high Blackpool Tower has stood on the pier since May 1894. The 4-sided steel lattice tower has a curved contour like the Paris Eiffel Tower .

Museum trams run along the city's seafront promenade , which were the only ones on the British Isles for a long time after the regular trams were abolished in the 1950s and 1960s. Since the end of the 20th century, however, the tram networks have been expanded again in numerous British cities. The double-decker tram cars in Blackpool are still unique in Europe, although they only run a few days a year.

Blackpool is known as the headquarters of the sports car manufacturer TVR and as the production facility for Jaguar . It is also home to a soccer team, Blackpool FC . In 2010, after 39 years, the club managed to climb back into the country's top league.

From the 19th century, the city was a special holiday destination for the northern English working class. When the tourism industry became cheaper in the 1960s, the Mediterranean region became the most popular holiday destination. Blackpool Pleasure Beach amusement park is one of the largest in Europe.

Blackpool is one of the birthplaces of modern mass tourism . Towards the end of the 18th century, the place initially made a name for itself as a seaside resort for the affluent population of northern England. The proximity to the textile cities of the nearby Lancashire , however, brought about an orientation towards a wider range of visitors from an early stage. Even before the railroad reached Blackpool in 1840, there were organized excursions to Blackpool by workers' savings associations, whose participants were somewhat disparagingly called "Padjammers" after the city of Padiham. These excursion guests were housed in disastrous mass quarters. Nevertheless, Blackpool also retained the “Nobel Audience” well into the 19th century - the First Pier (built in 1863, now the North Pier) was aimed at this more affluent audience, while the second (now the middle) pier, opened in 1868, soon became a dance platform for textile workers should serve. In 1842 a group of Sunday school teachers called on the then troubled P&W rail line for a 50% special discount on their association's Sunday excursion to Blackpool - this July 3, 1842 trip became one of the first examples of modern organized mass tourism in the form of the Social trip . Half-price Sunday excursions quickly became a formula for success for British rail companies. Through the creation of the four so-called Bank Holidays 1870-80 there was a huge swell in the flow of visitors to Blackpool and the corresponding entertainment establishments, such as the Raikes Hall dance palace, which opened in 1872 and which also became famous for its patriotic fireworks. In September 1879, Blackpool pioneered electric lighting in order to save an economically weak tourist season - autumn illumination has since become a trademark of the seaside resort. Other tourist attractions were the still existing Blackpool Tower (1894) and 1896 by engineer Walter B. Basset built and existing until 1928 Ferris Gigantic Wheel . In the 20th century, many of these attractions had been replaced by modern rides and roller coasters (e.g. Big Dipper and The Big One ). Blackpool tourism has suffered severely from the advent of budget airlines and competition from theme parks . At the end of the 20th century, Britain was often associated with a cheap, kitschy place for wild stag and hen parties. Even so, Blackpool remains a tourism-centric city and the city council is investing millions in attractions, transport links and advertising to reinvent Blackpool. The tenth branch of Madame Tussaud's wax museum opened in 2011 . At least since August 2005, Blackpool has had a Ferris wheel again - around 50 m high, 26 rotating gondolas and retrofitted partial LED illumination.

A major sporting event is the annual Blackpool Dance Festival in the impressive Empress Ballroom in the Winter Gardens , the most important and largest dance sport festival in the world.

Every year Blackpool hosts the world's largest magic festival, the Blackpool Magic Convention . In 2017 it took place for the 65th time.

The M55 motorway ends in Blackpool .

Blackpool owns one of the oldest trams in Great Britain.

There is an hourly direct train connection to Manchester and Manchester Airport. There are also connections to York and London Euston.

The city of Blackpool maintains a city ​​partnership with Bottrop ( North Rhine-Westphalia ).