Warwickshire is divided into the districts of North Warwickshire , Nuneaton and Bedworth , Rugby , Stratford-on-Avon and Warwick . Historically, Coventry , Solihull, and Birmingham also belonged to Warwickshire. However, in 1974 these became part of Metropolitan County West Midlands.

Most of the population lives in the north and in the middle of the county. The north is traditionally industrial (coal mines, textile industry, cement works and mechanical engineering)

The southern part of the county is largely rural and only sparsely populated; there are no bigger cities.

Previously, a large part was the western Warwickshire, including those areas that are part of Birmingham and West Midlands today, from the Forest of Arden ( Forest of Arden covered). For this reason, many place names in the northwestern part of Warwickshire end with the ending "-in-Arden". Most of this forest was cut down between the 17th and 19th centuries to provide fuel for industrialization .

In the 8th and 9th centuries, what is now Warwickshire was part of the Kingdom of Mercia . In the late 9th century this kingdom ended and in 874 large parts of Mercia (eastern Warwickshire) were ceded to the Danish conquerors through King Alfred's treaty with the Danish leader Guthrum . Watling Street in northwest Warwickshire became the border between Danelag in the east and the very diminished Mercia in the west. There was also a border with the Kingdom of Wessex in the south.

Because of its location between the borders of two kingdoms, Warwickshire had to create a defense against the threat of a Danish invasion. This task was carried out by Ethelfleda , "Lady of the Mercians" and daughter of King Alfred, who was responsible for the construction of the first parts of Warwick Castle . Defenses against the Danes were also built at Tamworth (Tamworth Castle).

Up until the 11th century there was regular fighting between Danes and Saxons . Because of its castle, Warwick became a bustling market town and powerful center in the Kingdom of Mercia. In the early 11th century, new borders were drawn within Mercia and Warwickshire became Warwick-ruled land.

The first recorded use of the name Warwickshire dates back to 1001.

Chesterton Windmill , built in 1633, remains today and is one of the county's most recognizable landmarks. During the English Civil War in the 17th century, the Battle of Edgehill (1642) took place in Warwickshire, near the Oxfordshire border . 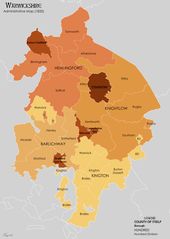 During the 18th and 19th centuries Warwickshire became a leading industrial county. The coal mines in northern Warwickshire were among the most productive in the country and fueled the industrial growth of Coventry and Birmingham.

Cities like Nuneaton, Bedworth, and Rugby were also industrialized. In rugby, two important railroad lines crossed and became a key factor in the industrial growth of rugby.

At the end of the 19th century, Birmingham and Coventry were major industrial cities, so the administrative boundaries had to be changed. In 1889 Warwickshire was formed and Coventry and Birmingham became county boroughs . Solihull later became a country borough. These boroughs remained part of the traditional Warwickshire county which expanded into Worcestershire when Birmingham incorporated some of Worcestershire's towns.

This situation lasted until 1974 when Coventry and Birmingham were carved out of Warwickshire and with parts of Staffordshire and Worcestershire became part of the new metropolitan county of West Midlands .

Bridge in front of Bidford-on-Avon