The title of this article is ambiguous. Further meanings are listed under Dorset (disambiguation) .

Dorset [ ˈdɔːsɪt ] (formerly Dorsetshire ) is a traditional and ceremonial county in south-west England . The capital was Dorchester . The neighboring counties are Devon to the west, Somerset to the northwest, Wiltshire to the northeast and Hampshire to the east.

Dorset is home to around 750,000 people and has the highest proportion of elderly residents of any county in Great Britain : 25.9% of the population are over 65 years of age.

Bournemouth and Christchurch were transferred from Hampshire to Dorset in 1974.

The seaside resort of Bournemouth and the port of Poole dominate the southeast of the otherwise rather rural county. In the 19th century, today's metropolitan area was little more than a small port surrounded by heathland.

In literature, Dorset is known as the home of the author and poet Thomas Hardy . Numerous places that he ascribes to the fictional Wessex in his stories are in Dorset. His cottage, in the woods east of Dorchester, and his house in Dorchester are managed by the National Trust and can be viewed. Stalbridge is the home of Douglas Adams , author of The Hitchhiker's Guide to the Galaxy . The poet William Barnes , the writers Theodore Francis Powys , John le Carré and PD James, and the satirist Thomas Love Peacock are also from Dorset.

After the death of Thomas Edward Lawrence , who had become known as Lawrence of Arabia (1888–1935), his friend Eric Kennington erected a tomb with a portrait of Lawrence in Arabic dress in St. Martin's Church in Wareham .

Poole Harbor is the second largest natural harbor in the world after Sydney . There are numerous islands in the very shallow bay. Including Brownsea Island , the founding site of the Boy Scout Movement. One of the few English oil fields is located under the harbor.

Much of the coastline of Dorset was appointed because of its exceptional geological formations 2001 World Heritage of UNESCO explained. 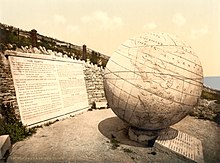 The great stone globe from Swanage (around 1900)
See also : List of Sites of Special Scientific Interest in Dorset