Counties (English: counties , singular: county ) are territorial units in England , the roots of which go back to the 12th century. Not only are they administrative units, but over time they have also become geographical names.

A number of reforms, the first of which took place in 1888, have made the term county in England ambiguous. This means today the administrative counties (today's administrative units ) as well as the traditional and the ceremonial counties (which are nowadays administratively irrelevant).

As administrative units, counties are usually classified below the regions and above the districts . 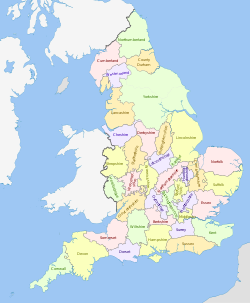 In 1974 the structure of local government was fundamentally reformed. A number of new counties were created, e.g. B. Avon , Cleveland , Cumbria and Humberside . Metropolitan areas became Metropolitan Counties ( Greater Manchester , Merseyside , South Yorkshire , Tyne and Wear , West Midlands, and West Yorkshire ). The counties of Cumberland , Herefordshire , Rutland , Westmorland and Worcestershire were dissolved. The county boroughs were also abolished. After this reform, there were 39 so-called non-metropolitan counties in England in addition to the six metropolitan counties , all of which were subdivided into districts for the purpose of two-tier administration . The term Administrative County has not been used in England since then.

Since 1996 the administrative structure has been changed several times. A number of the counties created in 1974 were dissolved in 1996; then disbanded such as Herefordshire , Rutland and Worcestershire were restored. In addition, densely populated areas were spun off from the areas of the counties and made administratively independent unit authorities . Most of the new Unitary Authorities were given formal county status . In Berkshire 1998, the County Council (was County Council ) abolished. The six existing districts in Berkshire were raised to Unitary Authorities, but were not given the status of a county .

Today in England exist on the middle administrative level

While Greater London is a ceremonial county, it is administratively not a county, but a region .

See also : Meaning of the names of the counties in the UK