As of 1996, Scotland has been divided into 32 Council Areas , including three island wards. This is a single-tier local government in which districts, cities and municipalities are centrally managed in one authority. There is no level of local government above or below them. However, some of the larger Council Areas have divided their area into regional units, in which so-called Area Committees are responsible for organizing certain tasks in their area.

The decentralization is in Scotland's most advanced, with a Scottish Parliament and a Scottish Executive .

Administrative division of Scotland from 1975 to 1996

Between 1975 and 1996 there were a total of nine regions in Scotland , which were divided into districts ("two-tier administration") and three island districts ( Shetland , Orkney and Western Isles ). The regions were in the reorganization of local government in 1975 instead of 1889 established administrative counties were created. In contrast to England and Wales , where counties still existed after 1974, the term “region” was chosen in Scotland.

With effect from April 1, 1996, these administrative structures were dissolved again. The current 32 Council Areas (including the three island districts) were created, which have since been responsible for the administration of the former regions as well as the former districts (“single-level administration”). 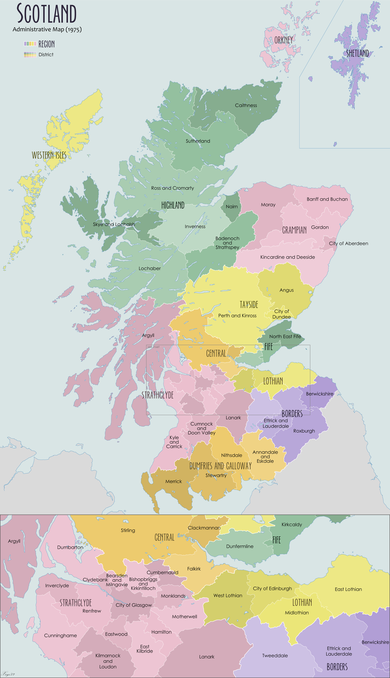