The title of this article is ambiguous. Further meanings are listed under Dundee (disambiguation) .

Dundee [ dʌnˈdiː ] ( Scottish Gaelic Dùn Dèagh , officially City of Dundee ) is a city in Scotland on the Firth of Tay . Dundee has a population of around 149,000 and is the fourth largest city in Scotland. The city forms one of the 32 Council Areas in Scotland.

As a settlement, Dundee is very old, it was a Pictish settlement during the Iron Age . In his book History of the Scottish People (from 1527), the Scottish philosopher Hector Boece (1465-1536 ) writes that the Pictish name of the settlement was Alec-tum , which means Pretty Square .

In 1191 the place received from King William I ( William the Lion , 1165-1214) city rights ( "Royal Burgh" ). His brother David, Earl of Huntingdon , named the city “Donum Dei” ( God's gift ) when he survived a shipwreck in a violent storm on his way back from the Third Crusade . In gratitude, he donated a church (later St. Mary Church ).

The current name comes from the Gaelic Dun Dèagh , castle on the Tay. The name part Dun (castle, fortification) is common in Scottish place names, such as in Dunfermline or Dunkeld .

From ancient times, fishing has been a major livelihood for the city, which resulted in the Dundee Whale Fishing Company having one of the largest whaling fleets in 1756 .

Later on, Dundee was best known for its jute industry . This developed in the wake of these whale catches. The whaling company supplied whale oil for the city's lamps. In the early 19th century, it was found that jute imported from India could be treated with whale oil and then made into solid fabrics that were used in a variety of products from sacks to carpets. Dundee developed into a world center for jute processing.

As a result, the city grew from 35,000 to 130,000 inhabitants in just 50 years in the 19th century. There is still a textile industry in Dundee today, but after the Second World War the demand for jute declined so much that many factories had to close.

Since 1878 Dundee has been the seat of the Dunkeld diocese of the Roman Catholic Church . Between 1975 and 1996 the city was the capital of the - in the meantime dissolved - Tayside region .

View across the Tay to the city and Dundee Law

Due to the repeated devastation, not much of its history can be seen in the city today. Few historic buildings remain, and only one city gate, East Gate , remains. The renovation programs of the 1960s and 1970s did the rest.

Today Dundee is a modern city, with a shopping center and pedestrian zone, parks, a charming promenade on the River Tay and an airport in the urban area.

The University of Dundee was founded in 1881, merged with St Andrews University in 1887 , but is now independent again. The Dundee Technical Institute, founded in 1888, became the University of Abertay Dundee , which is located in the city center and has partner programs with many other European universities. The city also has several important schools, such as the Duncan of Jordanstown College of Art .

The former port of Dundee, home of the formerly large whaling fleet, has lost its importance today and is largely given a new use, as public parks, for shopping and entertainment centers and sports facilities. The warship HMS Unicorn , which was launched in 1824 and served the British Navy for 144 years , still stands there . Located at Discovery Point , Robert Falcon Scott's RRS Discovery expedition ship can also be viewed there as part of an Antarctic expedition museum.

The specialty associated with Dundee in particular is jam . The area around Dundee is particularly good for fruit growing and the city has a notable canning industry.

The orange jam was "invented" in Dundee by the merchant woman Janet Keiller. She cooked bitter oranges, which were delivered from Spain and which no one wanted to eat, with sugar until they turned into a tasty compote, the famous Scottish orange jam.

In Great Britain it is said that Dundee lives on the three “Js” , jute, jam and journalism . The latter still plays an important role today. In 2005 the publishing house DC Thomson & Co. celebrated its centenary. In addition to some major newspapers, such as The Sunday Post and The Courier , the company mainly publishes comics, magazines and children's literature.

At Dundee, the River Tay is spanned by a railway bridge that was built in 1887. It stands roughly at the point where a bridge had previously stood. This collapsed on December 28, 1879 during a storm while a train was crossing it. 75 people lost their lives (see Firth-of-Tay-Bridge ).

The post-World War II period was notable for the transformation of the city's economy. While a fifth of the labor force was still employed by processing jute , it was possible to attract and promote new industries. The NCR Corporation chose Dundee as the base of operations for the United Kingdom in late 1945, mainly because of the lack of damage the city had suffered during the war, good transport links and high productivity thanks to the many hours of sunshine. Production began on June 11, 1947. Ten years later, the 250,000th cash register was produced. 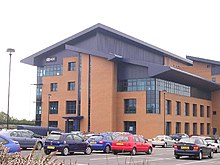 In the 1960s, NCR became the city's main employer and continued to produce cash registers and later ATMs. The company developed magnetic stripe readers for cash registers and started manufacturing computers. Astral, a manufacturer of refrigerators and spin dryers, was renamed Morphy Richards after a merger and was able to expand production quickly, employing 1,000 people. The establishment of Michelin tire production helped reduce unemployment through the decline of the jute industry, particularly the Board of Trade's abolition of jute control on April 30, 1969.

In the 1980s, the city struggled with the shedding of nearly 10,000 manufacturing jobs due to the closure of shipyards, the cessation of carpet manufacturing and the disappearance of the jute trade. To combat growing unemployment and poor economic conditions, an “Enterprise Zone” was established in Dundee in 1984. In 1983 Timex produced the first Sinclair ZX Spectrum home computers in Dundee. That same year, the company set production records despite a sit-in by workers protesting job cuts and plans to tear down one of the factory buildings to make way for a supermarket. However, Timex closed production in Dundee in 1993 after a bitter six month labor dispute.

Dundee is a regional center with a catchment area of ​​around 630,000 people who can reach the center within an hour. Ninewells Hospital is one of the largest employers in the Dundee area. It is the largest teaching hospital in Europe. In 2009 there were 30 employers who employed 300 or more people. The city's biggest employers are NHS Tayside (Ninewells Hospital), Dundee City Council, University of Dundee, Tesco , DC Thomson & Co and BT .

Other employers include companies such as NCR , Michelin , Alliance Trust, Aviva , Royal Bank of Scotland , ASDA , Scottish Citylink, CJ Lang & Son (SPAR Scotland), HBOS , Debenhams, National Express Dundee and WL Gore and Associates. The only areas that saw employment increase between 2005 and 2009 were education, health and social services, while employment fell in manufacturing, administration and services. The average weekly earnings of full-time workers in Dundee in May 2010 was £ 482.80; Men received £ 507.40 and women £ 418.80. Average earnings (men) in Dundee rose from £ 325.00 in 2000 to £ 482.80 in 2010.

The areas of biomedicine and biotechnology , including the products resulting from biomedical research university start-up companies , employing about 1,000 people directly and nearly 2,000 indirectly. Information technology and video game development have been major industries in the city for more than 20 years.

Dundee is also an important trading post for the north east of Scotland and ranks 4th in Scotland's retail rankings. The city center offers a variety of retailers, department stores and specialty stores. The Murraygate and High Street form the pedestrian zone and are home to a number of chain stores including Marks and Spencer, Monsun and Zara. The pedestrian zone also connects the two large shopping centers, the 39,000 m² Overgate Center and the 29,000 m² Wellgate Center.

The FC Dundee and Dundee United are the two biggest and most famous football clubs in the city. The stadiums of both teams are only a few meters apart.

Historically part of the County of Angus , Dundee has been one of the four Counties of Cities in Scotland since 1894, alongside Glasgow , Aberdeen and Edinburgh . In 1975 Dundee became a district of the Tayside region and in 1996 the city became the Council Area "City of Dundee" as part of the introduction of a one-tier administrative structure . Dundee is also one of the Lieutenancy Areas of Scotland.

The Dundee City Council comprises 29 seats, which have been distributed among the parties as follows since the 2017 local election:

The seats in both constituencies for the Scottish Parliament, Dundee City East and Dundee City West , were also won by SNP politicians in the 2016 general election .