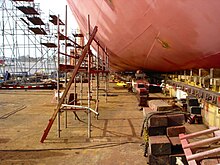 The launch is a kind of to-water originating a ship or large boat in the shipyard .

During construction, the hull is supported on solid bases; these are called pallen . They consist of concrete in the lower area and wooden parts in the upper area, which are pushed apart under the weight of the ship after a screw is loosened and disintegrate. Another variant are the supports called patents in normal shipyard usage. These patents consist of an isosceles wedge that runs in a lower part and an upper part. The height of the pallets can be changed by hammering in the wedge. In the past, stacks of wooden planks were used, from which the name Stapellauf derives.

The rail on which the ship is built is called the slipway . When the ship is launched, the weight of the ship is shifted onto a wooden sledge, which slides down a sloping ramp into the water after the retaining devices are released. The vehicle lies on the upper runway and slides into the water on the lower runway. Both tracks are doused with paraffin (wax) beforehand in order to obtain a smooth surface. Then the individual sections are coated with grease, the track sections are pulled into position and then connected to one another. The entire sledge is then lashed onto deck by the riggers. A so-called seesaw is usually placed on the bow . It is softwood that has the purpose of the compressive forces caused by the floating of the aft ship occur dissipate into the web. The rocker is only intended for single use and is then disposed of.

The entire drainage weight rests on the side rails while the drainage track is being introduced. The keel piles must be removed for the preparation. The weight is only lowered into the grease a few hours before the launch by loosening the side baffles, so that the upper track does not get stuck in the grease and the ship does not start to slide. Depending on the shipyard, a push-button is also used to push the ship if necessary. As a rule, however, the ships start to run themselves after 8-10 seconds at the latest.

The launch can be preceded by the launch of the ship . After the launch, the construction of the ship is not yet completed. Sometimes superstructures and ship cranes are still missing when the ship is launched (if provided). The new building also still has to be equipped ( ship's engine , interior fittings, and armament in the case of warships, are only installed after the launch).

Large ships today are often built in dry docks , which after completion are simply flooded until the ship floats up. Nevertheless, the name launched here has also been preserved. Ships can also roll on airbags.

The rarely used term “pile lift” describes a modern form of launching for smaller ships, in which the ship is first put into the water from its construction site with a crane.

Model test of a cross launch

The launch is a critical moment for the ship. In the case of a longitudinal launch, great forces act on the hull, which is first bent downwards as soon as the stern has reached the end of the ramp (pickguard). The stern then floats so that the hull only rests on the bow and stern and is bent upwards. In addition, the ship has little roll stability during this time and can overturn. This is counteracted, among other things, by partitioning off and flooding free spaces in the stern before launching or by introducing solid ballast. This reduces the buoyancy of the stern and the length over which the keel must freely support the ship is shortened. This is only possible with stern shapes and ship formats that make undercutting unlikely.

In the case of cross launching, the ship gets into a strong lateral position after submerging due to the braking effect of the water. The shipyard often has limited space, so that the ship has to be braked quickly to avoid a collision.

There were therefore a number of unsuccessful launching runs in which the ship overturned on the ramp or immediately sank in the water. If the temperature was too high or too low, lubricants did not have the necessary lubricity, so that the trunk would not move from the place. From the second half of the 20th century, modern lubricants have largely overcome these problems.

Alternatively, a ship with a largely flat hull underside can run along the water on rolling airbags. This method was developed in China in the early 1990s and standardized in 1993. The largest ship rolled in this way to date was a 55,000 GRT newbuilding in the province of Zhejiang in 2008.

The air bags made of tensile elastomer- textile composite material (similar to that of inflatable boats made of EPDM + PA6) are slim-cylindrical and have filling connections with pressure gauges installed axially at the pointed ends . They lie quite a bit more than the width of a ship across the hull and thus form a roller bearing on a flat ramp or a beach. When unloaded, these hoses reach a (nominal) diameter of 0.8–1.8 m. Smaller diameters and more textile layers (3–6 are common) allow higher working pressure (around 1–2 bar). The load-bearing capacity develops through indentation. If a hose is squeezed by 70% of its diameter, it reaches its high typical lifting force per length. The force comes from the internal pressure, sometimes flat against the fuselage (or the ground), which in this case is as wide as 110% of the nominal diameter.

The airbags are inflated under the ship, and as the air pressure increases, they lift the hull from the stacks, and finally from the highest ones. The ship then rolls off by further increasing the pressure in the higher-lying hoses. If the ship wants to lean to one side, all the hoses there are increasingly indented a little more and therefore develop more supporting force there. On the other (board) side it is the other way around. The ship is thus stable in the balance of forces. The internal pressure is retained in each hose.

Conversely, the hoses can also be pulled under a ship that has almost landed on land and then filled with pressure, the ship is supported in this way and can then be pulled flat up land on roller bearings. In front of the ship, additional air cylinders have to be laid out and filled appropriately.