This article deals with equipment used in shipbuilding. For the first name Palle see Paul . 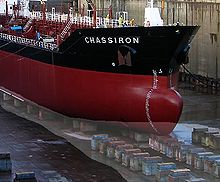 A palle (also: a pall ) is a carrying and lifting device used in shipbuilding , with a distinction being made between keel and kimping .

A palle for large ships is a block of wood or concrete approximately 1.0 m to 1.5 m high, 1.5 m wide and 0.5 m thick . The wooden version is composed of several transverse wooden beams and fixed with tensioning screws . Pallen are placed in an angle iron frame on the dock floor and firmly connected to the dock .

The pallets are placed in three rows with distances of 1.0 m to 1.5 m between the blocks along the entire length where the ship comes to rest. In the middle under the keel are the rigid keel piles , which are also called keel stacks .

The two outer rows are called Kimmpallen . They can be moved on the supporting upper side in order to adapt to the shape of the ship's hull , and they can also be adjusted in height using rods. The Kimmpallen are mostly on the ship's floor where it goes in an arc to the side hull.