How the most common types of dock work. above: dry dock, below: floating dock.

A dock is a facility that is used to dry ships so that work can be carried out on the underwater ship . Today, docks are mostly designed as either dry docks or floating docks . Most of the docks are operated by shipyards . Dry dock, the new construction ships will be used is known as building docks . 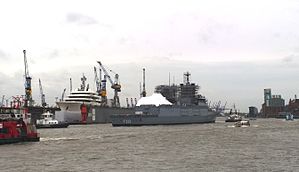 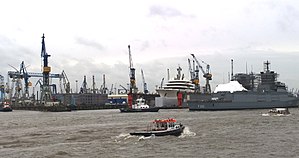 The stern tug pulls the frigate towards Dock 17 of the Blohm and Voss shipyard. In the background in floating dock 10 the yacht Eclipse

The frigate is pulled to the right in front of the dock over the stern. The stern of North Rhine-Westphalia can be seen in the dock

The frigate Baden-Württemberg is carefully brought into the correct position 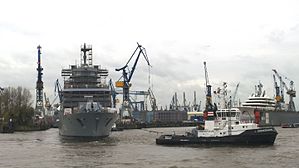 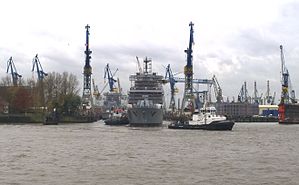 The flood current of the Elbe pushes the frigate to the left bank. The free tug Bugsier 18 is now helping with docking

A dry dock is a basin that can be sealed off from the rest of the water with a watertight seal. By lowering the water level in the basin, a ship located in it can be drained.

The basin is called the dock chamber , the side facing the water with the gate as a watertight seal is the dock main . The barrier gate is designed either as a lock gate or as a floodable floating body , which can be floated into a fold on the main dock to close the dry dock . Flooding causes the float to settle in front of the main dock and, after the dock chamber has been emptied, is pressed sealingly against the seam by the water in front of the dry dock. On the floor of the dock chamber there are pallets that carry the load of the ship as long as it is dry.

When docking, the ship is usually pulled into the dock chamber with winches, while tugs take care of the exact positioning on the side of the main dock . The ship is aligned and fixed in the chamber according to the dock plan before the lock gate is closed. Then the water in the dock chamber is pumped out so that the water level sinks and the ship rests on the pallets .

The load of the ship to spread evenly on the bottom of the chamber and not to overload the associations of the ship, which are bracing set up in accordance with the docking plan of the ship. To do this, the dock must be largely dry. Ships with a pronounced keel must also be supported laterally with beams against the wall of the dock chamber. After the water has been completely drained off, work on the dry ship can begin.

The dry dock was built around 200 BC. Invented in Ptolemaic Egypt . The ancient Greek author Athenaios gives a very detailed description of the structure and functionality in his work The Scholarly Meal. The fact that Athenaios wrote his report 400 years later (around AD 200) suggests that dry docks were known and used throughout ancient times.

Dry docks were used in China to build the great treasure ships around 1400 . The largest ships built were between 59 and 84 meters long and are said to have had 9 masts.

The oldest German dry dock was built in Bremerhaven. The first facility was created by Johann Lange from 1837 to 1840 . After 1860, his son Carl Lange added a second facility to this dry dock.

Dry docks were also built at Schau & Oltmanns (1856) and Hermann Friedrich Ulrichs (1865) in the years mentioned. In 1871 the Lloyd shipyard built a double dock.

A floating dock is a floating, submersible pontoon that can be used to pick up ships for maintenance work on the dry-exposed hull.

To dock a ship, the flood tanks of the floating dock are filled with water so that the entire dock is immersed deeper until the dock floor has reached the required depth. Then the ship is pulled into the dock with winches and / or tugs , positioned and moored. The dock is raised again by the subsequent pumping out of the flood tanks and the ship is exposed on the pallen above the waterline.

A forerunner of today's floating dock can be found in a small Italian book called Descrittione dell'artifitiosa machina , which was published in Venice in 1560. In the booklet, an unknown author explains a new method for salvaging a ship that has run aground and asks for the privilege of using its construction. An attached woodcut shows a ship flanked to starboard and port by two large floating scaffolds that are joined together to form a roof over the ship. A series of ropes that are lowered from the roof lift the ship into an upright position.

In 1691, the Danish admiral Henrik Span constructed a floating dock, as can be seen in the following medal. The inscription on the reverse translates as follows: “In 1691 AD, under the rule of the best King Christian V, the skill and diligence of Henrik Span invented the ship's engine, with the help of which old and long-term vehicles were broken Ships can be repaired and, as it were, in new condition, with considerable savings in time and effort, and to such an extent an amenity that nature had denied was provided by technology. "

A wooden floating dock was put into service in 1858 at the Stülcken shipyard in Hamburg. The floating dock in its current form was developed in 1893 by the American shipbuilder Gilbert. The first dock of this type was in operation until 1911.

A special form of floating dock, which is currently used in inland shipping, is the stevedock, in which only the bow or stern of the ship is lifted out of the water in order to enable repairs to steering systems, bow thrusters or propellers. 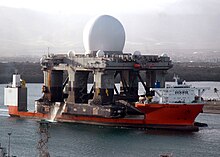 A dock ship refers to a transport ship that can lower its loading area below the surface of the water to take up floating loads; the transport takes place after the loading area with the load has been raised again.

In the Netherlands , before the Noordhollandsch Canal was built, a similar device called the ship camel was used to transport large ships to the port of Amsterdam . The facility was also used in other ports to enable ships with too great a draft to dock.