The title of this article is ambiguous. Further meanings are listed under Belfast (disambiguation) .

Belfast [ bɛɫˈfɑːst ] ( Irish Béal Feirste [ ˌbʲeːʟˠ ˈfʲɛɾʲʃtʲə ]) is the capital of Northern Ireland in the United Kingdom of Great Britain and Northern Ireland and the second largest city on the Irish island after Dublin .

Belfast has about 342,000 inhabitants (2018) and is located at the mouth of the Lagan River in Belfast Bay ( English Belfast Lough ). The city has the status of a city and forms one of the eleven administrative districts in Northern Ireland . In the Dublin-Belfast corridor along the highway live three of the six million Irish .

Belfast is the seat of a Catholic ( Diocese of Down and Connor ) and an Anglican bishop ( Diocese of Down and Dromore ) , a university city and has a seaport . The city is also the seat of the Government and Parliament of Northern Ireland . Inner-city areas of Belfast were among the scenes of the Northern Ireland conflict, especially in the 1970s .

The Irish Béal Feirste means "mouth of the Farset" (ir. An Fhearsaid , Irish feminine). What is meant is the confluence with the Lagan. The name of the river Farset in turn means "sand bank" due to the pronounced sand banks at its mouth. It is no longer visible today and runs below Bridge Street.

The city has the motto Pro tanto, quid retribuamus? ("For so much, what should we pay back for it?"). The saying has already been interpreted on many occasions as a call to fight and used as a battle cry , although it actually comes from the university and was intended to express gratitude towards the alma mater .

In 1177 a Norman castle was built in what is now the city . Belfast was founded in 1603 by Sir Arthur Chichester . In view of the continuing uprisings in Ireland, which remained Catholic, the settlement of loyal Scottish Presbyterians was promoted by the Crown , especially in the area of ​​Belfast . Huguenots who fled France built up the linen industry in the 17th century .

In the 18th century the port was expanded. Belfast was granted city rights by Queen Victoria in 1888 .

In 1912, the Titanic , built in the Harland & Wolff shipyard in Belfast, set out on its first voyage from here. With unrest in the years 1920-1922 in the context of the Irish War of Independence almost 500 people died. At the opening of the newly formed Parliament of Northern Ireland on June 7, 1921 in Belfast City Hall , King George V made an important proposal for a reconciliation between North and South. The speech, drafted by David Lloyd George on the recommendation of Jan Smuts , opened the doors for formal contact between the British government and the Republican administration under Éamon de Valera .

In April and May 1941 there was severe damage in the port and city from bombing by the German Air Force . In 1969 the civil war-like clashes between militant groups of Catholics and Protestants began (today we usually speak euphemistically of "troubles"). They were officially ended in 1998 by the so-called Good Friday Agreement . The strongly inhibited development of the city then got going. Economy and tourism developed more strongly. On 16./17. June 2009 there were riots in Belfast against local Romanians. According to those affected, they left their homes after several consecutive nights of attacks against them, shouting racist slogans, smashing windows and kicking doors. Police then evacuated over 100 Romanians to the Ozone complex in Belfast on June 17 after spending the night at City Church on University Avenue.

On May 31, 2011, a memorial service was held in Belfast for the launch of the Titanic on May 31, 1911 at the Harland & Wolff shipyard, then the largest shipyard in the world. 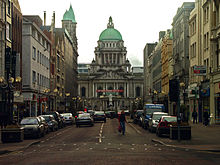 At the central Donegall Square are the City Hall (English City Hall , 1906, to be visited as part of guided tours) and the Linen Hall Library , a public library, founded in 1788. Here, interested parties can find everything about the armed struggle of the Irish Republican Army and the Peace process.

In the city center is the theater (English Grand Opera House ), built in 1894 by Frank Matcham . Opposite is the most famous pub , the Crown Liquor Saloon , which is also the oldest pub in Northern Ireland. On Donegall Street, a short walk from City Hall, is the Anglican Church of Ireland 's St. Anne's Cathedral .

The castle on the Cavehill (English Belfast Castle ) goes back to a Norman castle of the 12th century.

The Queen's University has around 25,000 students. Some of its buildings are from the Tudor period; it has a much-visited and particularly beautiful botanical garden . In addition to Queen's University, Belfast also has a campus of the University of Ulster , headquartered in Coleraine .

On the trail of the Northern Ireland conflict, visitors can go to the Peace Line : In West Belfast (west of the West Link expressway), this wall separates the areas of Falls Road (residential area for Catholic Republicans) from Shankill Road (Protestant Unionists). The regular sightseeing programs show the propaganda, murals called murals in both the Falls- as in the Shankill district.

About three miles east of the city center, in East Belfast , is the site of Stormont Castle, home to the government of Northern Ireland.

In the past decade, the river bank has been redesigned: hotels and the Waterfront Hall conference center have emerged there.

The city's zoo is on Antrim Road in north Belfast .

Belfast is home to Northern Ireland's only symphony orchestra, the Ulster Orchestra . Founded in 1788, the Linen Hall Library is the oldest library in town.

The Ulster Museum , founded in 1890, offers spectacular finds of the ship "Girona" (named after the Spanish province of Girona ), which was sunk in 1588 and belonged to the Spanish Armada .

On the east side of the Lagan River is the Odyssey Center with a large hall for sports and concerts, an IMAX cinema and a large interactive museum called W5.

A Titanic theme park opened on March 31, 2012 . It is located on the site of the former Harland & Wolff shipyard and forms the center of a new district, the Titanic Quarter , which is believed to be Europe's largest film studio, the Pain Hall Studios .

Since the end of the 17th century, Belfast grew into an important industrial location, mainly due to the linen industry.

The growing demand for drinking water was met at the beginning of the 20th century with the construction of the Silent Valley Reservoir .

Only with the expansion of the port at the end of the 18th century did shipbuilding gain in importance. The city has the largest dry dock in the world from the Harland & Wolff shipyard . The shipyard had up to 30,000 employees. Today there are 200.

In the immediate vicinity of the shipyard in East Belfast are the extensive workshops of the aircraft manufacturer Short Brothers , which was founded in 1909 and initially made a name for itself in the manufacture of the S.25 Sunderland flying boat used in World War II . From the sixties the company specialized in the construction of civil and military transport machines and wrote aviation history with the production of the " Short Belfast ", the third largest transport aircraft in the world powered by propeller turbines. In 1989 the plant for 30 million was pounds sterling to the company Bombardier sold.

In 1979, the De Lorean Motor Company (DMC), the 1982 insolvent company of the American sports car manufacturer John De Lorean , set up a factory in the Belfast suburb of Dunmurry . The legendary DeLorean DMC-12 was produced here until 1983 .

By Waterfront Titanic Quarter in which the Northern Ireland Science Park , the Paint Hall Studio , the Titanic-themed park , Public Record Office of Northern Ireland have settled several economic and industrial sectors, Belfast has grown in British and international tourism.

In a ranking of cities according to their quality of life, Belfast was ranked 68th out of 231 cities worldwide in 2018. The capital of the Republic of Ireland, Dublin , was ranked 34th

There is no road or subway . Local public transport is via buses that meet in the center of the city. The system is designed in a star shape. There are no end-to-end connections from north to south. The transfer point in the center has different names: City Center, Donegal Square, Howard Street. But they are all in the same place or in the immediate vicinity of the place.

Northern Ireland Railways operates rail services in Northern Ireland. There are inner-Northern Irish connections from Belfast to Derry ~ Londonderry and Portrush  via Ballymena and Coleraine , Bangor , Larne via Carrickfergus (with a connection to ferries to Stranraer (Scotland) and Douglas (Isle of Man)), and Newry  via Lisburn and Portadown ; these trains depart from Belfast Great Victoria Street Station . On the route in the direction of Portadown, the Enterprise express trains run jointly with the Irish State Railways Iarnród Éireann , the latter serving Lanyon Place station in Belfast .

Belfast has two airports, the International Airport around 15 miles west of the city and the George Best City Airport immediately east of the city, which is connected to the city center by the 600 bus.

There are ferry connections from the Belfast Ferry Port to Liverpool ( Stena Line ) and Stranraer in Scotland (Stena). In the summer, the Isle of Man Steam Packet Company also operates the route to Douglas on the Isle of Man .

Belfast has one of the UK's most famous ice hockey clubs , the Belfast Giants , which is located in the 8,700-seat Odyssey Arena .

Furthermore, the traditional Irish sports Gaelic Football and Hurling are particularly popular among the Catholic Irish population. The games of the County Antrim selection in each sport are played in Roger Casement Park, a 21,000-seat stadium in the Belfast district of Andersonstown .

Five Belfast teams are currently represented in the IFA Premiership , the top division of football in Northern Ireland. In addition to Cliftonville FC , the oldest football club in Ireland , founded in 1879, Glentoran FC and Linfield FC, known as the " Big Two " because of their dominance in the league, as well as Crusaders FC , which is based in the north of the city, and newly promoted Donegal Celtic FC from West Belfast. Until the middle of the 20th century, the Northern Irish Football League lived off the rivalry between Linfield FC and Belfast Celtic FC, which played in West Belfast . In 1949, the successful Catholic club withdrew after spectators stormed the field in a game against Linfield and attacked players. Between 1920 and 1924 Belfast Celtic was forced to withdraw from gaming due to political unrest.

The mixed- religious football club Bankmore Star dissolved in 1972/73 in the wake of the Northern Ireland conflict .

The games of the Ulster Rugby Club , which represents the province of Ulster as a subsidiary of the Irish Rugby Football Union (IRFU) , take place at Ravenhill Stadium , which has a capacity of 12,500. Ulster Rugby's greatest success to date was in January 1999 when it won the Heineken Cup, the European Rugby Cup .

The Northern Ireland Trophy snooker tournament has been held in Belfast's Waterfront Hall since 2005 .

Based on the city center, Belfast is geographically referred to as North, South, East and West Belfast. This also corresponds to the four constituencies of the British Parliament . A motorway and the River Lagan with its confluence with Belfast Bay are built or natural boundaries.

For the local elections there are the following circles, which also correspond to the local names of the districts:

In May 2011, 25-year-old Niall Ó Donnghaile was elected by the Sinn Féin as the youngest mayor ( Lord Mayor ) in Belfast's history.

→ Main article : List of personalities from the City of Belfast