Northern Ireland is the continuation of the landscape in northern England and southern Scotland to the west. The coastline is richly indented. As everywhere in the British Isles , the climate is oceanic and influenced by the Gulf Stream .

Northern Ireland has a north-south extension of 140 km. It is 180 km from east to west. The Northern Irish coast is about 500 km long. The island of Rathlin in the northeast is part of Northern Ireland. The border with the Republic of Ireland is almost 500 kilometers long. Northern Ireland's share of the entire Irish island is around 16 percent (while the proportion of the population is just under 30 percent).

There are three mountain ranges: in the northwest the Sperrin Mountains , in the northeast the Antrim Plateau (highest point: the Trostan, 551 m), in the southeast the Morne Mountains (852 m).

The largest lake in Northern Ireland (and also in the British Isles as a whole) is Lough Neagh west of Belfast with 392 square kilometers and a maximum depth of 25 m. 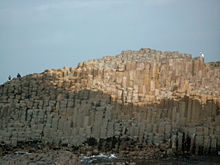 The division of Ireland into the Republic of Ireland and Northern Ireland took place in 1921 after the Irish War of Independence .

Subsequently, the Catholic part of the population was disadvantaged when looking for work and accommodation . The society was divided politically into mostly Irish-born Catholic Republicans , who pursued the goal of reunification with the Republic of Ireland, and mostly Protestant Unionists or Royalists, who were descended from immigrants and wanted to remain in the United Kingdom.

One aspect of this construction is that the ministries of the Republic of Ireland have a counterpart not in London but in Belfast and the gradual integration of Ireland is thus promoted.

By 1972 Northern Ireland was divided into six counties:

From 1973 there was a single-tier administration with 26 districts .

As of April 1, 2015, Northern Ireland has been divided into eleven districts:

Coats of arms of the former counties

The main political parties in the Northern Ireland Assembly and their current rough characterization:

Election results of the last five elections to the Northern Ireland Assembly:

Result of the referendum on leaving the EU

Following this result, then Irish Prime Minister Enda Kenny called for a referendum on the reunification of Northern Ireland with the Republic of Ireland.

The former Royal Ulster Constabulary (RUC) has been called the Police Service of Northern Ireland (PSNI) since 2001 . While it consisted almost exclusively of British Protestant civil servants until 1998, it was reduced by half in 1999 to around 7,000 civil servants and is supposed to employ half Catholic applicants for new hires in order to ensure social peace. In Belfast there is a contact point for complainants against the police, the so-called "Ombudsman".

The Calvinist Reformed Presbyterian Church forms the largest Protestant community with around 19 percent. She is of Scottish origin (there: Church of Scotland ).

Church of Ireland (Anglican): Unlike England , there has been no state church since 1871 . About 250,000 people (14% of the population) make up the Anglican community of the Church of Ireland , whose Archbishop ( Robert Eames ) resides in Armagh and is also responsible for the approximately 70,000 members in the Republic of Ireland.

Catholics : About 41 percent of Northern Irish call themselves Roman Catholic . The seat of the Primate of All Ireland ( Seán Brady , Eamon Martin since 2014 ) is also in Armagh. Even the Catholic Primate and the Irish Catholic Bishops 'Conference (Irish Bishops' Conference) are all-Ireland institutions.

Over the course of the last few decades, there has been a continuous increase in the proportion of the Catholic population. It is estimated that if this trend continues, Catholics will constitute the majority of Northern Ireland around 2021.

After the EU enlargement in 2004 , many migrants from Eastern and Central European countries came to Northern Ireland (mainly Poland), the majority of whom were Catholic. In 2011 this group comprised 35,720 people (63% of them Catholics), who made up just under 2% of the population.

However, there is also a steady increase in the group of people with no religious affiliation.

Northern Ireland - like the Republic of Ireland - was characterized by emigration .

Larger investments were hardly made due to the ethnic-denominational division and the political uncertainty; the gross domestic product (GDP) moved in 1991 to 81 percent of the average in the United Kingdom ; The unemployment was high.

Since 1997 more has been invested and the economy is growing faster. Since 1999 the country has seen an increase in tourism . Premier Power is an important company .

When compared with the gross domestic product of the European Union , expressed in purchasing power standards , Northern Ireland achieved an index of 78 in 2015 (EU-28 = 100).

In 2017 the unemployment rate (according to Eurostat definition) was 4.6%.

Since the rail network is very thin, a fairly dense network of bus routes has developed.

Northern Ireland has a relatively thin rail network of 340 km. Translink only uses diesel- powered trains and connects Belfast to:

A natural monument worth seeing is the Giant's Causeway (German "dam of the giant"), with around 40,000 basalt columns by the sea, protected by the National Trust , about 20 km west of Ballycastle on the north coast of Antrim. Other areas and landscapes worth seeing are:

Cultural events are concentrated in Belfast and Derry. With 1.5 million visitors (2002), tourism contributes two percent to Northern Ireland's gross national income ; the vast majority of visitors are from the Republic of Ireland as well as other parts of the UK. Around 100,000 visitors come from the rest of the European Union and the USA .

The Irish national rugby team after winning the 2009 Six Nations

Sport is mostly organized on a pan-Irish basis and in most sports a common team represents the entire island. The most important exception to this is football , in which both parts of the country compete with their own national team. For the Olympic Games , Northern Irish athletes compete for the team of Great Britain , along with England, Scotland and Wales. Northern Ireland takes part in the Commonwealth Games with its own team and has been represented at every event since 1930.

Football is the only one of the popular sports where Northern Ireland has its own national team and does not share a team with the southern part of the island. The Northern Irish national soccer team has so far qualified for three soccer world championships ( 1958 , 1982 and 1986 ) and they reached the quarter-finals twice (1958 and 1982). At the European Football Championship 2016 , Northern Ireland's first participation in a European Football Championship , it reached the round of 16, but was defeated there against its British neighbor Wales . Interestingly, the Irish national football team also qualified for this tournament and were eliminated in the round of 16.

Rugby union is also a popular sport and is organized by the Irish Rugby Football Union . Northern Ireland's Ulster Rugby is one of Ireland's four professional teams and participates in Pro14 , the European Rugby Champions Cup and the European Rugby Challenge Cup ; the other three Irish teams are Connacht Rugby , Leinster Rugby and Munster Rugby . Ulster Rugby won the Heineken Cup in 1998/99 and the Celtic League in 2005/06 . The Irish national rugby union team participates in the annual Six Nations , along with England , France , Italy , Scotland and Wales , as well as in the four - yearly rugby union world championships . Ireland hosted the 1991 and 1999 World Cups . The greatest honor for Irish players is to go on tour with the British and Irish Lions in the southern hemisphere every few years to compete against the All Blacks from New Zealand , the Springboks from South Africa or the Wallabies from Australia .

Cricket , also perceived as "English", was once a marginal sport in Northern Ireland, but the success of the Irish national team at the past Cricket World Cups in 2007 , 2011 and 2015 made this sport increasingly popular in Northern Ireland. The victory over England in the 2011 tournament is particularly noteworthy. On June 22, 2017, Ireland was granted test status together with Afghanistan , which entitles them to participate in the most prestigious level of cricket. As in rugby and hockey, the Irish national cricket team is an all-Irish team and represents both parts of the country equally.