The title of this article is ambiguous. Further meanings are listed under Apartment (disambiguation) .

An apartment (Old High German wonên : "be satisfied", "live", "be", "stay") is the combination of a majority of rooms, which in their entirety must be designed in such a way that an independent household can be managed. The combination of a majority of rooms must form a separate, self-contained residential unit from other apartments or rooms, in particular living rooms, and have independent access. In addition, in some countries such as Germany it is necessary that the ancillary rooms ( kitchen , bath or shower , toilet ) necessary for running an independent household are available.

In Germany, the living space must be at least 23 square meters (m²). However, in the sense of registration law, “any enclosed space that is used for living or sleeping” counts as an apartment, regardless of whether it is in a residential or a non-residential building. This means that furnished rooms and mostly stationary caravans also fall under the term “apartment”.

Living as a term

The Frankfurt kitchen from 1926 (reconstruction)

Model living room at the Leipzig spring fair in 1950

Not all languages ​​have a separate word for living. In the English-speaking world, no distinction is made in everyday language between "living" and "living" ("to live" in each case). Even in philosophical concepts (e.g. Heidegger ) the question of the content of the term is discussed. In the western culture today, living is assigned to functions that are viewed as private or intimate within this culture and therefore do not take place in public space: sleeping, personal hygiene, being together and caring for community with the most familiar people, exchanging tenderness, storing personal items , as well as private housekeeping. In addition, associations such as “living in one place”, “rooted in one place” or “spatial center of life” are assigned to the term living . It therefore has a certain proximity to the concept of home.

By law, the term of living is characterized by a permanent domesticity, self-organization of the housekeeping and the domestic sphere of activity as well as voluntary residence (BVerwG March 25, 1996 - 4B 302.95, BauR 96,676). The apartment as the personal area of ​​life forms a place of retreat from state control. This fact is assigned to the domiciliary right , which, however, relates to more general locations, which also include commercial operations. Domestic rights are protected in Germany by Article 13 of the Basic Law ( inviolability of the home ). In Austria domiciliary rights are anchored in Art. 9 of the Basic Law . The Federal Constitution of the Swiss Confederation grants citizens in Art. 13 the protection of privacy including respect for the home. A violation of house rules leads to trespassing .

Calculation of the living space 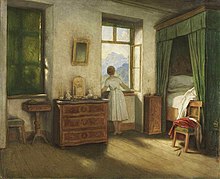 People have lived in fixed, immovable dwellings since people started farming, and in some cases even before. Such an apartment provides protection from the weather, security, the preparation and storage of food, personal hygiene, but also your own freedom of design and representation. In addition to the need for food and clothing, the need for an apartment is counted among the basic human needs. For long periods of time, homes were almost exclusively inhabited by families or shared apartments ; only in modern industrial and post-industrial societies did individual households increase.

The current associations with the term “living” as well as many current forms of living have their roots in the 19th century, in the emerging bourgeois age, that is, in a time when the bourgeoisie became an influential section of the population. During this time, the home and family became a haven and intimate area for the bourgeoisie. The industrialization shifted the work to other places. The apartment, freed from work functions, became a “home from home”. In the Biedermeier period , this new bourgeois living culture was given an aesthetic expression, which in some cases still has an effect today. In the 20th century, the apartment became part of social reforms, for example in the Neues Frankfurt project , but also part of artistic discussions, for example in the painting of interiors by August von Brandis or, more recently, the "inhabited art installation" by Sandip Shah.

Apartment types are usually also referred to due to their nature and the usual construction method during certain time periods . For example, apartments in old buildings essentially refer to the construction method that was customary in residential construction until the Second World War, in which masonry walls , wooden beam ceilings and box windows were typically used and which usually have room heights of over 2.6 m. As new housing apartments will be designated in a newly built or re-built building. The duration for which such a building is considered to be new is inconsistent and, depending on the context, either extends until the first necessary renovation, for example, because the building shows visible signs of wear or the current architectural style or construction technology has changed so much that the building has not more would be rebuilt in this form. There is no specifically defined name for apartments in houses from the period between the old and new construction phase. Sometimes apartments from the first years after the Second World War are referred to as post-war buildings , and in East Germany until the start of prefabricated construction (around 1965) also of apartments in old new buildings . Otherwise, apartments and houses are classified according to the decade in which they were built, e.g. B. "... from the eighties" .

Sustainability or sustainable development does not only include the areas of environmental protection or ecology, but also the social and economic dimension. Over their entire life cycle, sustainable products are less harmful to the environment, more socially compatible and more affordable than conventional products. Applied to the apartment concept , sustainability means protecting resources and the environment - without destroying the value of the living space or the quality of life. Above all, energy efficiency aspects , the room layout and the room climate play an important role.

The use of energy-efficient household appliances (e.g. refrigerator, washing machine and dryer) can make great savings. But the choice of floor covering, ceiling and wall lighting can also save the resources available. Thermal, visual and acoustic details also contribute to a healthy living environment.