This article deals with the general principle of action - for other meanings see Sustainability (disambiguation) .

But even small campaigns save water and electricity

Sustainability is a principle of action for the use of resources , in which a lasting satisfaction of needs is to be guaranteed by preserving the natural regenerative capacity of the systems involved (especially of living beings and ecosystems ).

The term has a complex and multifaceted conceptual history. The word sustainability comes from the verb to follow , which means “to last or stay for a long time”. Nowadays there are three main meanings to be distinguished:

A first-time use of the term sustainability in German in the sense of a long-term responsible handling of a resource is proven by Hans Carl von Carlowitz in his work Silvicultura oeconomica in 1713 . Carlowitz asked "how to do a sothane [such] conservation and cultivation of the wood / that there is a continuous, permanent and sustainable use / because it is an indispensable thing / without which the land cannot remain in its forge".

The noun sustainability was the latest in 1832 by the German forester Emil André his title in the Prague published book Simplest the highest yield and the sustainability of all making sure end Forst Wirth shaft method used.

In a dictionary entry from 1910, sustainability is regarded as a translation of the Latin perpetuitas and is the constant and incessant as well as the uninterrupted, the effective and emphatic or simply the success or the effectiveness of a thing. Before 1860, the designation as a noun was not yet lexically recorded, in 1915 for the first time in spelling (the adjective sustainable is different ); Until the 1980s it had the meaning of permanence in everyday language and was not used for a term with a political meaning. For example, the word sustainable appears in Meyers Konversations-Lexikon from 1905 in the sentence "In order to provide sustainable warming of the rooms, the boiler of the hot water heating must have a relatively large capacity", and furthermore in the statement that a forest is already sustainable Represents a form of forest management.

The following important information is missing from this article or section:
Criticism and presentation of how this is understood in other languages
Help Wikipedia by researching and pasting it .

Some authors state that sustainability has become a “rubber word” due to the diverse definition . At the same time, however, it is emphasized that the idea "can only be communicated as a rubber word [...] in all areas of society". In order to avoid the blurring problems with the term sustainability , in disputes about environmentally friendly forms of civilization, other terms such as civilization ecology or future compatibility are sometimes used , which, however, have not yet prevailed. 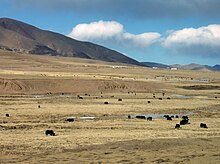 Extensive, traditional remote pasture (as here with yaks in Tibet could) only because of their sustainable production methods humans for thousands of years to earn a living offer

Industrial agriculture is far from being sustainable

Subsistence-oriented , traditional forms of economy that are still largely unchanged (such as hunting and gathering , farming (provided that the natural areas are still sufficiently large and sparsely populated) as well as remote grazing ) form stable and lasting - i.e. sustainable in the original sense - economic systems that operate in a variety of ways are networked with natural ecosystems. They are characterized by efficient , slow and continuous adaptation of land use to the respective site conditions for centuries.

However, this effect is more and more reversed when rapid economic and social change creates problems whose effects cannot be foreseen (see also cold and hot cultures or options ).

The Convention on Biological Diversity of the United Nations recognizes that traditional ways of life are sustainable in a particular degree, not reduce biodiversity. In contrast to industrialized societies, which are not directly dependent on a specific area, such communities have a direct interest in maintaining and protecting these ecosystems, the stability of which they have never endangered.

Ethnology has shown that traditionally sustainable economic activity in many indigenous cultures (before contact with Europeans) was anchored in the cultural memory of animistic worldviews , myths , rituals and taboos of the ethnic religions as a moral guideline of a "holy connection to the earth" (→ see also: wild thinking ) . According to Odum and Cannon , all stable systems have mechanisms that keep their state of equilibrium as constant as possible and compensate for fluctuations in the environment. The anthropologists Roy Rappaport , Gerardo Reichel-Dolmatoff and Thomas Harding have independently established that the myths and ritual cycles of the so-called " primitive peoples " fulfill precisely this task and enable the communities to adapt to changes in the environment as much as possible and the stability of the Impairing ecosystems as little as possible .

Ideally, sustainability should relate to ecological, economic and social aspects

The World Commission for Environment and Development (Brundtland Commission) set up by the United Nations in 1983 had a decisive influence on the international debate on development and environmental policy , without, however, referring to the origin of the German forestry debate. The commission, chaired by the former Norwegian Prime Minister Gro Harlem Brundtland , was given the task of identifying long-term prospects for a development policy that is also environmentally friendly . In its final document, Our Common Future, from 1987, also known as the Brundtland Report , the concept of sustainable development inspired by this guiding principle is defined.

Sustainability is a term used in science as well as in politics and business practice. It serves less as a descriptive but rather as a normative target term. The terms "sustainability" and "sustainable development" are often used synonymously . At least the following three variants compete in the debate:

The German political debate on this term is closely linked at the local level to the Local Agenda 21 processes initiated by the UN conference . At the federal level the designation since that is Study Commission on "Protecting humans and the environment, objectives and framework of Sustainable Development" from 1995 used stronger. The first interim report of the commission already served at the first Rio follow-up conference in New York in 1997 (“ Rio Plus 5 ”) to report on the German contributions to the implementation of the sustainability concept.

Three strategies are often used in the discussion about sustainable development:

Sustainability in the modern economy 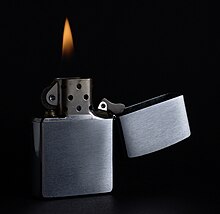 Lighter with a "lifetime guarantee"

Sustainability as a sales argument

The subject of sustainability science has been established at universities since 2001 . Research outside of the university environment is mostly summarized under the heading of social-ecological research . The Federal Ministry of Education and Research is funding research projects on climate change, the seas and oceans, the cities of the future and the sustainable use of resources in the framework program “Research for Sustainable Development (FONA)”. With the FONA framework program, the federal government is implementing the national sustainability strategy .

At the beginning of March 2015, the Freiburg Sustainability Center , a cooperation between the Albert Ludwigs University there , the five Freiburg institutes of the Fraunhofer Society and companies from industry, started.