Jacob Ludwig Karl Grimm (also: Carl ; * January 4, 1785 in Hanau ; † September 20, 1863 in Berlin ) was a German linguist and literary scholar and lawyer and is considered the founder of German philology and classical studies .

His curriculum vitae and work are closely linked to that of his one year younger brother Wilhelm Grimm , as the often used name Brothers Grimm indicates. 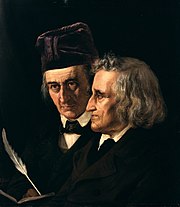 Jacob Grimm spent his youth in Steinau an der Straße , where his father Philipp Wilhelm Grimm had been transferred as bailiff in 1791 , and from 1798 attended the Friedrichsgymnasium in Kassel with his brother Wilhelm .

In 1802 he enrolled at the University of Marburg , where he studied law with Friedrich Carl von Savigny . Through his legal historical research and through Ludwig Wachler's lectures, his attention was directed to the historical development of the German language and literature. When Savigny went to Paris in 1804 for scientific research (relating to Roman law in the Middle Ages) , he soon had Grimm follow him. However, he soon got tired of legal studies and announced in letters that he wanted to devote himself to old German literature in the future. When he returned to Kassel , his mother's place of residence, in September 1805 , he got a post at the War College , which was dissolved before a year had passed.

After his mother's death in 1808, Jacob Grimm had to support the family. He became the librarian of Jérôme Bonapartes , King of Westphalia , and in February 1809 was also appointed as an assessor in the Council of State. He used the leisure that official business left him to study old German poetry and language. Since 1806 he had collected fairy tales together with his brother Wilhelm and the circle around his friend Werner von Haxthausen , which were now edited and published. He was also involved in the folk song collection “Des Knaben Wunderhorn” by Achim von Arnim and Clemens Brentano .

After the restoration of the Electorate of Hesse, Grimm lost his position as King Jérôme's private librarian, but was taken over into the diplomatic service of the returned Elector. 1814/15 he was Kurhessischer legation secretary at the Congress of Vienna , where he met like-minded people at the inn to Strobel head in the street Wollzeile founded the "wool Zeiler society." He briefly negotiated in Paris about the return of stolen art treasures to Hesse and Prussia.

During this time he began studying the Slavic languages. In 1815 he took his leave as a diplomat to devote himself to literary history and linguistic research. A year later he became second librarian at the library in Kassel (his brother Wilhelm had become secretary there in 1814). When the brothers were not promoted as expected after the senior librarian's death in 1829, they started looking for a new position.

In 1830 Jacob Grimm received a professorship at the University of Göttingen , where he also worked as a legal librarian . In the years 1834-1837 he gave three lectures on German literary history, which has been passed down through student notes. Georg Schulze served him as his amanuensis in Göttingen . In 1837 Grimm was relieved of his office by the King of Hanover as co-author of the protest of the " Göttinger Sieben " and expelled from the country.

Grimm's motion to improve the basic rights of the German people in 1848: “The German people are a people of free people and German soil does not tolerate servitude. He sets strangers unfree who linger on him free. ”The request for improvement was not accepted.

In 1841 he followed the call of the Prussian King Friedrich Wilhelm IV. To Berlin and became a member of the Prussian Academy of Sciences with the right to give lectures at the Friedrich-Wilhelms University . He set the tone at the two Germanist meetings in Frankfurt am Main in 1846 and in Lübeck in 1847 .

In 1848 he was a member of the pre-parliament . In the spring of 1848 he took part in the Frankfurt National Assembly in the Paulskirche as a non-party member of the Prussian district of Duisburg (29th constituency), where he was given a place of honor. Since the meeting was very slow and the results were rather disappointing for him, he resigned his mandate in October 1848 and henceforth stayed out of active political life. In the same year he finished his lectures and published his history of the German language in Leipzig .

After that he concentrated on the work on the German dictionary , which was supposed to present the entire New High German vocabulary from Luther to Goethe . Work on this huge joint project with his brother had already started in 1838.

Jacob Grimm died on September 20, 1863, above the article Frucht der Deutschen approximately ( Fruit of the German Dictionary). He was buried in the old St.-Matthäus-Kirchhof in Berlin-Schöneberg . The grave of honor of the State of Berlin is in field F, FS-001/004, G1. 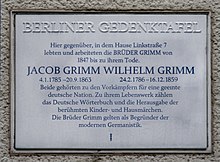 The grave of Jacob and Wilhelm Grimm and three of Wilhelm's children in the Old St. Matthew Cemetery in Berlin

Together with his brother Wilhelm, he is considered to be the founder of ancient German studies , German linguistics and German philology . Articles such as Über den Deutschen Meistergesang (1811), along with Karl Lachmann's research, are considered to be the first solid stocktaking of older German literature. In order to assert his positions, Jacob Grimm cultivated a confrontational style that did not shy away from polemics or denigrating competitors. One of the “founding myths” of German studies is the so-called “science war” against Friedrich Heinrich von der Hagen and Johann GG Büsching .

The two Brothers Grimm became famous for their joint collection of Children's and Household Tales by the Brothers Grimm (2 volumes, 1812–1815) and the German Dictionary (from 1838, 1st volume 1854).

Jacob Grimm formulated a first phonetic law for the Germanic languages ​​in 1822, which is still called the " first phonetic shift " today. In Anglo-Saxon countries one speaks of Grimm's Law , in French it is called loi de Grimm .

Another pioneering work for German studies is German Mythology , published in three volumes in 1835 , which linguistically approaches the way of life and the view of gods not only of the Germanic peoples. As a result, similar works were created in the Finno-Ugric and Slavic regions. Grimm's historical-comparative approach also created the prerequisites for the foundation of Romance linguistics by Friedrich Diez .

Jacob Grimm had been a member of the Prussian order Pour le Mérite for science and the arts since May 31, 1842 . In 1847 he was elected to the French Académie des Inscriptions et Belles-Lettres for life . In 1857 he was elected to the American Academy of Arts and Sciences and in the year of his death in 1863 to the American Philosophical Society .

A grammar school in Kassel ( Jacob-Grimm-Schule ), a special school of the same name in Soest and a comprehensive school ( Jakob-Grimm-Schule ) in Rotenburg an der Fulda are named after Jacob Grimm .

Parts of the estate (such as books from his library with marginal notes) are in the Berlin State Library - Prussian Cultural Heritage (SBB-PK). Another part, including letters from and to the brothers Jacob and Wilhelm Grimm , various manuscript volumes and above all hand copies with handwritten additions, is kept in the estate of his nephew Herman Grimm in the Hessian State Archives in Marburg . Other important sources can be found in the Brothers Grimm Museum Kassel .

Correspondence between the brothers Jacob and Wilhelm Grimm, critical edition in individual volumes:

Two volumes of the Kassel edition (works and correspondence of the Brothers Grimm):

To Jacob Grimm as a lawyer