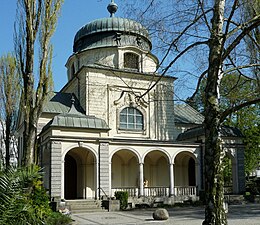 The Alte St.-Matthäus-Kirchhof Berlin is a historic cemetery in Berlin with many culturally and historically significant tombs that are now under monument protection . The churchyard is located between Großgörschenstrasse and Monumentenstrasse in the Schöneberg district on the so-called Red Island . Like Kreuzberg , 500 meters further to the east, the cemetery slopes gently towards the Berlin glacial valley with the course of the Spree , as it is laid out on the north slope of the Teltow .

The cemetery was inaugurated on March 25, 1856 and belongs to the St. Matthews community in the southern Tiergarten district - still known as Untere Friedrichsvorstadt in the 19th century - in the area of ​​today's Kulturforum , which was also known as the millionaire district until the end of the Second World War was designated.

History of the St. Matthew Congregation

The millionaires quarter, which was almost completely destroyed in the Second World War, was one of the wealthiest areas in Berlin, especially in the second half of the 19th century. Rich merchants, artists, scientists and higher officials lived here.

The St. Matthew Congregation emerged as a split from the Evangelical Trinity Congregation after the members of the Parish , who lived far away from the Trinity Church on today's Mohrenstrasse in Berlin-Mitte , decided to establish their own congregation with their own church. On October 5, 1843, a church building association was founded to take over and promote this task, chaired by the Secret Council Emil von Koenen (1796–1883). A building site for the St. Matthew Church was given to the association in the same year (on December 9th) by the physician Vetter, who wanted to open up the area between what was then Tiergartenstrasse and Grabenstrasse, today's Reichpietschufer . The church was to be built centrally in this area so that Matthäi-Kirchstrasse could be laid out with Matthäi-Kirchplatz. On January 1, 1844, von Koenen sent a letter to the Prussian King Friedrich Wilhelm IV asking for a building permit for the church. This took place on January 27, 1844, together with the building permit for Straße des Vetter. The building of the church was carried out by the senior building officer Friedrich August Stüler until October 1845. Carl Büchsel from Brüssow was appointed pastor of the new St. Matthew Church . The separation of the parish into the old Trinity Congregation and the new St. Matthew Congregation took place with the declaration of a specially convened consistory on May 5, 1846, and the new church was consecrated on May 17, 1846. However, the churchyards of the Trinity Congregation should continue to serve as the cemetery for both communities.

By the year 1852 the St. Matthew Congregation had grown to over 15,000 people due to the enormous growth of the suburbs of Berlin. Carl Büchsel therefore asked the king for permission to build a second church in the community in order to meet the demands of the growing community. On December 28, 1858, the community purchased a building plot on Bernburger Strasse, on which the Lukaskirche was built by March 17, 1861, based on designs by building inspector Gustav Möller and preliminary designs by Stülers. In the early years this was operated as a branch church , i.e. led by the St. Matthew Congregation. The communities were separated on January 1, 1865, but the St. Matthew Cemetery was still used by both communities.

Foundation and early history of the St. Matthew Cemetery

Entrance to the cemetery

Due to the unfavorable conditions for the St. Matthew Congregation when using the cemeteries of the Trinity Congregation, the desire to create a separate cemetery for the congregation arose only a short time after the two parishes separated. In 1853 the opportunity arose to buy a large piece of land owned by the landowner Carl Friedrich Wilhelm Paetel on the slope between the facilities of the Berlin-Potsdam Railway and the Berlin-Anhalt Railway and to create a cemetery there. The community acquired the site on June 9, 1854 for a little more than 6000  thalers and set up the cemetery. As a result, a large grave digger's house and a cemetery wall were built that surrounded the entire site. The first burial took place on March 25, 1856, at which the wife of Rittmeister Krottnauer-Petersen was buried - the grave site can no longer be found today, however, as the early volumes of the books of the dead have been lost.

The cemetery was enlarged for the first time on October 1, 1863. For this purpose, an area on the eastern side of the cemetery was purchased that belonged to the Prussian military treasury. On December 6, 1866, the community purchased another piece of land on the western side from the landowner Johann Friedrich Ludwig Grunow. A last extension took place in 1884 on the west side, on which a plot of land was sold, after which no more land was available in the area. For this reason, the community built a second cemetery in 1895/1896, today's state-owned cemetery Priesterweg .

Recent history of the cemetery

Garden of the Star Children II

In the years 1907/1908 the community had a chapel built as a central building with a dome in Baroque style, which was designed by the architect Gustav Werner and carried out under the supervision of building officer Carl Tesenwitz.

The cemetery should be given up as part of the National Socialist plans for a world capital Germania . In 1938 and 1939, a third of the grave sites in the northern part were reburied in the Stahnsdorf south-west cemetery. In order to give today's visitor an impression of the extent of the changes in 1938/1939, a memorial stone was erected at the former site of the hereditary burial of the Langenscheidt family . In 2008 EFEU e. V. with art students attached the front view of the Langenscheidt mausoleum as a wall painting on the facade of an adjacent house. The mausoleum was moved to the south-west cemetery in 1938/1939 and has been preserved there.

A memorial stone has been erected in the St.-Matthäus-Kirchhof for the resistance fighters of the assassination attempt of July 20, 1944 around Claus Graf Schenk von Stauffenberg , who were shot in the Bendlerblock and buried there. A little later the dead were exhumed by the SS , burned in the Wedding crematorium and the ashes scattered on the Berlin Rieselfeldern .

At the beginning of the 21st century, the registered association Denk mal positHIV took over the sponsorship of the extensive grave of the reindeer Albert Streichenberg in order to set up a place of remembrance and burial for people with HIV and AIDS in Berlin. The marble relief of a Genius comes from Rudolf Pohle . In 2015, the grave site was enlarged to five places and was redesigned through an artist competition.

In 2007 the non-profit association EFEU e. V. ( acronym for “Receiving, promoting, developing, supporting”), which has been committed to the preservation and maintenance of the cemetery as well as public relations through guided tours, exhibitions and public events.

In April 2008 the garden of the star children, which is part of the association's projects, was inaugurated, a place of rest and memorial for miscarriages , stillbirths and babies who died during or shortly after birth. By summer 2017, eight grave fields had already been created.

At the entrance to the cemetery, EFEU member Bernd Boßmann, also known by the stage name Ichgola Androgyn , runs the Finovo cemetery café. It is the first cemetery café in Germany and was named a “top location” in the 2009 restaurant guide by Prinz magazine . About him and his commitment to Friedhof, EFEU e. V. and the garden of the star children have already made several documentaries, television and radio reports and newspaper articles.

In 2015 there were still 43 graves of prominent personalities in the cemetery on Großgörschenstrasse, which are recognized as graves of honor and which the State of Berlin takes care of their care and preservation.

The monumental tomb of the Hansemann family with an atrium by the architect Friedrich Hitzig dates from 1877 and was extended by a mausoleum in 1902 by the architect Hermann Ende and restored in 1986. Buried here are among others the banker and Prussian finance minister David Justus Ludwig Hansemann and his daughter-in-law Ottilie von Hansemann (born [von] Kusserow), a socially committed supporter of the women's movement (Ottilie-von-Hansemann-Stiftung; Ottilie-von-Hansemann- House on Ernst-Reuter-Platz / Otto-Suhr-Allee in Berlin-Charlottenburg ).

The tomb in the style of the Italian Renaissance of the engineer and paper manufacturer Carl Hofmann (1836–1916) is the work of Bruno Schmitz . The marble statue was made by Nikolaus Geiger . The tomb was restored and re-leased in 1991/1992 on behalf of the Historic Churchyards and Cemeteries Foundation in Berlin and Brandenburg with the help of the German Class Lottery Foundation and in 2000. The name Hofmann designed by Ernst Westphal in the gable area and the inscriptions for Amalie and Carl Hofmann were removed. 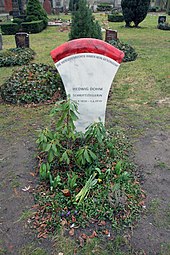 Hedwig Dohm's grave ; Location identified again in 2007 and given a new tombstone

Memorial stone for the men who were briefly buried here on July 20, 1944

In addition, there is a memorial stone in the cemetery for the resistance fighters in the attack on July 20, 1944 with the names of the following people:

Other graves of interest 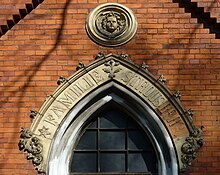 Mausoleum of the Mitscherlich family, burial place a. a. by Eilhard Mitscherlich and Gustav Heinrich Wiedemann 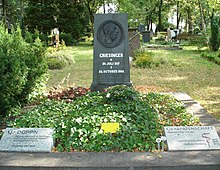 Grave of the psychiatrist and internist Wilhelm Griesinger ; former grave of honor

Sculpture pilgrim, sunk down on the cross for the 'last rest' (around 1875) on the Katsch hereditary funeral, created by Rudolf Pohle

Wall painting of the Langenscheidt mausoleum