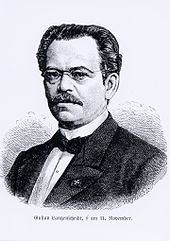 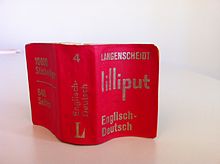 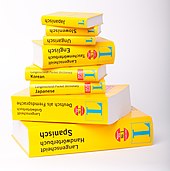 The Langenscheidt Publishing is a media company with a program in the field of languages.

The optical mark of the Langenscheidt umbrella brand has been the turquoise “L” on a yellow background since 1956 . The company celebrated its 160th anniversary in 2016.

The idea to publish language courses came to Gustav Langenscheidt on his educational trip through Europe. Extensive language skills were rather rare in the 19th century, especially among the bourgeoisie. In London, Langenscheidt hindered his ignorance of the English language so much that he annoyedly noted: "It is a truly embarrassing feeling not to be human among people and to be able to exchange ideas."

The first publishing product was a French course in 1856, which Langenscheidt had developed together with his French teacher Charles Toussaint (1813–1877) under the title "Letter-based language and speech lessons for self-study of the French language". The special thing about this self-study course was that the focus was not on grammar, but on reading and practical application of the foreign language. The most important features of the “ Toussaint-Langenscheidt ” method are 1. the literal interlinear translation of simple sentences, 2. easy-to-understand phonetic transcription and 3. the strict obligation to repeat the subject on a daily basis.

The success came quickly: for the 25th anniversary of the publishing house (1881), the French letters were already in their 30th edition. Starting with the teaching letters for the English language (1861), the Toussaint-Langenscheidt method was transferred to other languages. 1923 appeared as the 14th and last foreign language, the "Letter Language and Speech Lessons for Self-Study of the Hebrew Language".

In 1863 Langenscheidt added dictionaries to its program with the French dictionary "Sachs-Villatte", named after its authors. The first part of the 4,000-page standard work with over 310,000 headwords and phrases appeared in 1869, the last in 1880.

In 1869, the Berlin publishing house began work on an encyclopedic dictionary of the English language. The first delivery of the “Muret Sanders ” came out in 1891, the last not until 1901, 32 years after the editorial work had started. At 600,000 gold marks, the total costs were well above the originally estimated amount. The substances contained in the four-volume dictionary also served as the basis for a number of smaller dictionaries, which had much higher editions than Muret-Sanders himself. The founder of the publishing house, Gustav Langenscheidt, did not see the completion of the large dictionary. A few days before his death on November 11, 1895, he had the Business handed over to his son Carl Langenscheidt (1870–1952).

At the beginning of the 20th century, Langenscheidt began to think consistently in rows and in this way to optimally utilize his substances. From the lexicons published in 1883 as Langenscheidt's emergency dictionaries for English and French, the publisher's first dictionary series was developed in 1903: The pocket dictionaries are still one of the main pillars of the Langenscheidt dictionary program.

Langenscheidt-Verlag proved to be a technology trendsetter as early as the 19th century and experimented with gramophone records . In 1905 the result was the world's first records for self-study language lessons. The discs, produced in cooperation with the Deutsche Grammophon-Gesellschaft , made it easier to learn the English language and for the first time added a non-book article to the publisher's program.

In the Second World War, the Berlin publishing house built in 1905 was largely destroyed. The flames destroyed most of the editorial and printing documents as well as numerous machines. In 1947, publishing activities could be resumed and reconstruction began.

In 1948, Karl Ernst Tielebier-Langenscheidt (* 1921), the great-grandson of the company founder, joined the company. In 1951 he became a personally liable partner and in 1952 the successor to his grandfather Carl Langenscheidt.

At the end of the 1950s, Langenscheidt established the travel and cartography segment as the second pillar of his publishing business : Polyglott-Verlag , acquired in 1955 and previously specialized in phrasebooks, was expanded to include a travel guide series in 1959. Under the name Polyglott Travel Guide , it quickly developed into one of the most successful brands for travel information in German-speaking countries. From 1980 onwards, Langenscheidt systematically expanded the travel and cartography division through company takeovers at home and abroad. The most important expansion step was the takeover of the international tourism publisher APA Publications, Singapore, in two stages (1992 and 1996). With the purchase of the APA Insight Guides , Langenscheidt became one of the world's largest providers of travel literature.

Langenscheidt reacted to the construction of the Berlin Wall in 1961 by founding a branch in Munich. In 1968 the company moved into its first own publishing house at Neusser Straße 3.

In 1981 Andreas Langenscheidt (* 1952) joined his father’s company and, like his brother Florian Langenscheidt , became managing and personally liable partner of Langenscheidt KG in 1990. He developed the company, which he headed until 2010, into an international publishing group. His younger brother Florian retired from operational management in 1994.

In 1983 Langenscheidt presented the "first electronic dictionary in the world" with the Alpha 8 English . The first dictionary applications for PDAs and smartphones hit the market in 2005. In 2010, the publishing and media company launched the first digital books and apps. In 2012, the company presented Langenscheidt IQ for the first time, a cross-media , customizable language course for self-learners.

Since 2008, the publisher has been calling for an annual vote on the youth word of the year in cooperation with the youth newspaper YAEZ , the youth magazine Bravo , the organization die Arche and the TV magazine taff youth. The event is called Youth Word of the Year .

In 2015, DaF - German as a Foreign Language - became another focus of the company. As a result, the company also dealt with the topic of refugees in Germany and participates in the integration initiative We together of German business, which was confirmed by the sponsorship promise.

Langenscheidt has also been offering a language learning app with the L language course since summer 2016 . The course is aimed at beginners and those returning to school who want to learn English or Spanish in short units.

Günther Holding has been the owner of Langenscheidt GmbH & Co. KG since January 2013 , after the Langenscheidt family sold their shares. With the two business areas "Learning Languages" and "Lexicography and Education", the company is now concentrating on its core competence in language learning. At the beginning of 2015, the owner reacted to the "unpleasant sales and earnings development that has persisted for years" with staff reductions.

On April 26, 2019, the Klett Group (known through the Pons brand ) was approved by the Federal Cartel Office for the indirect acquisition of significant assets from Langenscheidt GmbH & Co. KG and Langenscheidt Digital GmbH & Co. KG . (File B6-27 / 19).

Since 1988, Langenscheidt KG held a majority stake in Bibliographisches Institut & FA Brockhaus AG , which included the classic brands Duden , Brockhaus and Meyer as well as the calendar publishers Harenberg (since 2004) and Weingarten (since 2006). Brockhaus was sold to Bertelsmann in 2008 , while Cornelsen took over the rest of the Bibliographical Institute in 2009 .

In 1993, the Hexaglot group in Hamburg, which specializes in electronic dictionaries, was taken over. This enabled Langenscheidt KG to expand its market position in this segment.

Langenscheidt also cooperated in the 1990s on French textbooks with the French publisher Hachette Livre .

In 2002 Langenscheidt took over the worldwide publishing activities of Berlitz International Inc., Princeton.

In 2005, a long-term cooperation with the Milan-based book company Mondadori was agreed. This enabled Langenscheidt to gain a foothold on the Italian dictionary market.

In 2013 Langenscheidt started a cooperation with Selecta Toys AG in the areas of product development, marketing and sales.

Gustav Langenscheidt first registered the trademark “Ohn's diligence no price” in 1882. It shows a globe with three hands interlocking above it. Their wrists wear bracelets with the words "England", "France" and "Germany". In the foreground are the banner with “No hard work, no price”, laurel branches and a curved “L”. Langenscheidt used the trademark protection that had been introduced in Germany in 1874 early on.

Initially, despite the “L” in the symbol, the brand was not called “Langenscheidt”, but “Method Toussaint-Langenscheidt”. From 1912 the acronym "Metoula" was used. This was followed by the signet "LVB" (for "Langenscheidts Verlagsbuchhandlung") and finally from 1903 the initial "L" was printed on the covers of the dictionaries. The trademark was simplified in a first revision around 1920 and reduced again ten years later. It now consisted of a globe, ribbon without a slogan, a laurel branch and a serif "L" in the middle. The appearance corresponded entirely to the New Objectivity of the commercial graphics popular at the time.

The decisive change took place in 1956 with the introduction of the turquoise "L" on a yellow background. It was designed by the Berlin professor Richard Blank, who not only designed the logo, but also developed a corresponding corporate design. Further modifications were made in 1986, 2002 and most recently in 2013. Langenscheidt received a Red Dot Award in 2013 for the new brand identity, which also includes the further design of the traditional trademark.

In 2010, Langenscheidt registered the color brand yellow for its bilingual printed dictionaries and sued the language learning software manufacturer Rosetta Stone in 2012 for injunctive relief and compensation, as it also used the color for its products. In September 2014, the First Civil Senate of the Federal Court of Justice , responsible for trademark law , decided that the yellow packaging from Rosetta Stone infringed the Langenscheidt color trademark .

In 2016 the Langenscheidt logo was represented as the only logo of a book publisher in the context of the exhibition “LOGO - The Art with the Sign” in the Museum for Concrete Art in Ingolstadt .

In 2014, the vote on the Youth Word of the Year was manipulated by members of the 4chan and pr0gramm.com sites by creating a fake Facebook page calling for people to vote for the word "fapping". Although the vote then turned out to be in favor of “fapping”, the jury decided on the phrase “works with you”. In 2015 the word " Alpha-Kevin " was removed from the vote due to possible discrimination, even though it was at the top.