It was operated via a touch-sensitive LC display , often with handwriting recognition .

In the early 1990s, Apple first used the name PDA for its newly introduced Newton MessagePad .

From around 2003, T-Mobile called some of its smartphones or smartphone-like devices MDA ( Mobile Digital Assistant ).

Electronic organizers emerged from programmable pocket calculators and could only be used to a limited extent for mobile use due to the bulky keyboard or the consumption of disposable batteries. In the 1990s, electronic organizers were equipped with a small touch screen . This enabled data to be entered with the finger or with a special pen with a rounded tip. The pen could be used to display graphic information, e.g. B. Drawings, or simple handwritten notes entered. "Organizers without a keyboard" became a new class of devices: PDAs .

In 1992 the first PDA appeared with the Zoomer. This was developed by Palm and was distributed by Tandy and Casio. 1993 followed with the AT&T EO440 or 880 , Amstrad Penpad 600 and Newton MessagePad from Apple further PDAs.

In March 1996, US Robotics brought out small and very successful devices under the name Pilot (later Palm , English for palm), which is where the name Palmtop comes from. The word component -top was borrowed from Laptop . Palmtop named a portable PDA for the palm of your hand . Also Olivetti participated in 1998 with the daVinci on the market of the organizer. 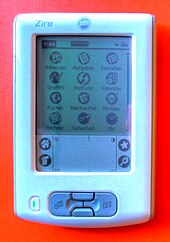 PDAs usually have a quick -starting operating system . The operating system, the most important settings and personal data such as appointment and contact details are stored exclusively in RAM . Therefore, PDAs are never completely switched off (as long as they have power in the battery), but in a standby mode . They continue to use some electricity even when they are turned off. This has the advantage that the user interface is available immediately after switching on the PDA. However, this has the disadvantage that the battery discharges slowly even when the PDA is switched off. When it is completely discharged, the operating system and all data (including address, appointment and contact data) as well as the individual settings are deleted and must be restored after a restart.

Modern PDAs therefore have a separate second battery in addition to the main battery. After the main battery has been completely discharged, normal operation is no longer possible, but it continues to supply the volatile memory with power and thus backs up all the data stored there for a longer period of time. The normal charging process charges both batteries. Alternatively, some PDAs use a flash memory (ROM) that does not require a power supply (example: Palm Tungsten E2).

Other PDAs use additional integrated ROM memory modules or slots for external memory cards , for example in SD format . There the user can permanently save their own applications or data without the risk of loss due to a power failure.

The telematics in PDAs deals with the networking of PDAs.

The most important applications on a PDA (generic term PIM software ) were usually delivered with the PDA as standard, for example address book, appointment planner, calendar, notepad, task planner, e-mail and project management. Most of the newer devices come with additional applications such as word processing , spreadsheets , calculators, games, an MP3 player, a video viewer and a tool for recording and playing back spoken notes and sounds ( dictation machine ). Software for the most varied and special situations can be downloaded from the Internet, for example , and transferred to the PDA via cable ( USB or serial ) or wirelessly via infrared or Bluetooth interface. These interfaces can also be used to connect a PDA to a suitable mobile phone and use this to access the Internet .

As the performance of the devices increased, new uses were added. PDAs can also be used for mobile data acquisition or can replace other mobile computers in certain scenarios. By combining Bluetooth or WLAN (WiFi) with a Voice-over-IP client, it is possible to use a PDA as an IP telephone. PDAs are also used as navigation systems. The PDA can determine its exact position via GPS receiver , either permanently installed in the device or connected externally (via serial interface or via Bluetooth) and, with the appropriate software, can also be used for route planning.

Modern PDAs can be synchronized with the PC , it was carried out with programs such as HotSync or ActiveSync . For example, e-mails , addresses and appointments can be exchanged between the PDA and the computer and all other databases can also be saved on the PC. In this way, both devices bring each other up to date. In addition, you can transfer previously defined websites from the Internet to the PDA when synchronizing and then read them independently of the network connection (so-called web clipping , for example with Plucker , AvantGo or Mobipocket ).

Another area of ​​application is industry, for example in the field of logistics or as mobile diagnostic systems. In these cases, the availability of suitable interfaces and often also greater robustness of the devices is important.

Due to the positive hardware properties already mentioned, the multifunctional PDAs are also being used more and more frequently for mobile learning or m-learning in companies, universities and schools.

Thanks to a large number of connection and expansion options, PDAs can be used for different areas of application. In addition to the classic area of ​​appointment and address management, it is possible to write texts, use it as an e-book reader, reference work, MP3 player or navigation system. Other applications are computer games , internet use or the taking and displaying of digital photos.

The last generation of PDAs in particular is equipped with a web browser , often with Microsoft Internet Explorer in Pocket PC format. Pages prepared for mobile phone displays are best suited for using the WWW on PDAs. These are stripped-down websites that do not use data-intensive presentations. At that time the mobile data rates were low (→ GPRS , EDGE ); today, thanks to LTE and LTE 4G , this restriction is no longer necessary.

One of the first PDAs (introduced in 1991) was the HP95LX from Hewlett-Packard . The successors HP100LX and HP200LX were very popular devices. All three were based on the DOS operating system in conjunction with additional software , of which Lotus 1-2-3 was certainly the most powerful. Lotus 1-2-3 was the best-known spreadsheet program under DOS at that time (just as Microsoft Excel is under Windows today). A desktop spreadsheet in a palm-sized device was a technological masterpiece at the time and made it possible to use extensive worksheets on the go for the first time .

There were a number of different operating systems used in PDAs.

With PEN / GEOS , a PC / GEOS for PDAs, handhelds and smartphones such as the ZOOMER PDA, the HP OmniGO100 / 120 handheld PC (successor to the DOS HPxxx-LX series) and the early Nokia Communicator smartphone series, which the rise of Nokia established to lead the world market.

The basis for the devices often offered under the keyword Palm is the Palm OS developed by the former company PalmSource .

Another operating system for PDA is GNU / Linux . There were different distributions, a variant specially adapted to PDA is OPIE , which is available free of charge in several languages for Sharp Zaurus, Siemens Simpad and HP iPAQ , as well as Maemo , which was developed by Nokia for the Nokia 770 and also for its successor N800 / N810 was used.

Other PDA types were sold under the name Pocket PC and ran under a special Windows version called Windows CE or Windows Mobile .

PDAs of the last generation (up to around 2010) also support Java (based on Connected Device Configuration , CLDC or MIDP ), which in the case of mobile digital assistants, i.e. smartphones , was one of the most popular applications of embedded Java . With the help of the standard Java version, it is not possible to address the COM interfaces for GPS receivers, for example, so there are special Java versions, for example EWE or its successor EVE.

Smartphones (successors to PDAs) mostly use Google Android or Apple iOS as the operating system.