CompactFlash ( CF ) is an interface standard, including for digital storage media . In the form of CF cards, it is mainly used in digital cameras , but also in network components, computers and personal digital assistants (PDA). 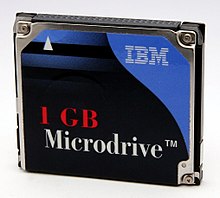 In contrast to hard disks or CD drives, CompactFlash memory cards are usually storage media without moving parts. The information is permanently stored on a rewritable flash memory . In the meantime, however, IBM produced CF-II cards with small hard drives as a storage medium. This product became known under the name Microdrive and had the advantage of a better price-performance ratio. Later there were other manufacturers of hard disk-based CF cards. However, due to the drop in the price of flash memory, these solutions practically disappeared from the market between 2005 and 2006.

256 MB CF card without a cover

In addition to the actual memory chip, CompactFlash cards with flash memory also have a controller that manages the memory and offers an (E) - IDE interface to the outside world , which differs from conventional IDE interfaces in the shape of the connector. In contrast to all other flash-based memory cards, with the exception of the SD card, the card-internal controller and not the end device (such as the digital camera) is responsible for addressing the actual memory. The rather complicated details of the flash memory control therefore remain hidden from the host device. If there is support from the memory for a file system that can address more memory (such as FAT32 versus FAT16), CF cards with high capacity can also be read by old devices. The contacts are protected.

In digital storage media (for digital cameras), CompactFlash technology was the market leader for a long time because of its high speed, but has been increasingly superseded by the SecureDigital Card (SD) since the late 2000s . In 2020, professional digital SLR cameras will generally no longer support CompactFlash cards. For older camera models with CF memories, an adapter from Compact Flash to Micro SD can be used.

CompactFlash cards are the most common storage medium in digital cameras, especially in the professional field such as press photography. Even professional digital mobile audio recording almost always works with CompactFlash if no hard drive or disc systems are used for reasons of space, energy or weather.

In the plotter for recreational boating today CompactFlash cards are by default used as storage media.

Since they have no moving parts, CompactFlash cards are relatively insensitive to impact and are therefore suitable for use in industrial or mobile systems. They are often used there as the only permanent memory. The industrial computers of some manufacturers can optionally be configured with a permanently integrated CompactFlash slot or IDE port. In this case, the CompactFlash card is usually repartitioned and formatted with a different file system than the one supplied as standard. This is common practice for Linux or QNX systems.

Other cards after CompactFlash

There are adapters for the CompactFlash slot that can be used with other memory cards. Multimedia cards , SDHC and micro SDXC memory cards , for example, can be used in devices with CompactFlash slots. In terms of backward compatibility to smaller memory cards, CompactFlash has the greatest flexibility for future memory sizes, because only the controller of the adapter used and the size of the card used limit the usable memory size. There are limitations with older devices, as some of them only support FAT16 and thus limit the capacity of the memory card to 8/16 GB in terms of software.

CompactFlash according to IDE

Since the CompactFlash card has an IDE interface, a passive adapter (i.e. a piece of circuit board with cables that connect the contacts of the card to the corresponding pins of an IDE connector) is sufficient to be able to use it instead of an IDE hard disk ( see comparison ). In desktop computers, the adapter also requires a connector to power the card, which the IDE ribbon cable used there lacks. Because the 44-pin version of the IDE interface of notebooks provides a power supply, it can be used in place of a hard disk or with a PC card / PCMCIA adapter without an additional power supply. The power supply is also integrated in the 40-pin ZIF cable, which in some subnotebooks connects to the hard drive or SSD.

Some cards identify themselves as removable media, which causes some operating systems and programs to refuse to be installed on them. This identifier can be changed for some cards.

The only difference is the thickness of the design. Therefore, Type I cards also work in a Type II slot.

While the external shape remained unchanged, the CF standards were adapted to evolving capacities and bandwidths.

The above standards are upwards and downwards compatible.

The faster SATA protocol is used with the CFast standard. The connections of these cards are not compatible with the classic CompactFlash cards.

The logical further development, which is neither mechanically nor electrically compatible with the CompactFlash interface, but is based on PCIe 3.0 and NVMe, is CFexpress. The standard was announced in September 2016 and published in April 2017.

Depending on the manufacturer, the speed is declared either as a multiple of the reading speed of CD-ROM drives (with Kingston or Transcend) or with the maximum data transfer rate (with SanDisk). The base unit ("1 ×") is historically based on the basic speed of the CD-ROM drives, which achieve a transfer rate of 153.6 kB / s in CD-ROM mode 1 at 1x reading speed, whereby this value is 150 kB / s is rounded down. The following table compares the usual speed designations and maximum data transfer rates.

With CF I / O, CompactFlash offers the option of connecting other devices in addition to memory. Due to the logical and mechanical similarity to the PC card standard , it is easy for manufacturers to offer the corresponding cards as CompactFlash variants. The CompactFlash slots of PDAs are used to 56K - GSM - and GPRS - modem and Bluetooth - Ethernet - and Wi-Fi adapters, GPS and - radio receivers, digital cameras, USB to connect -Host adapter and even graphics cards. Such adapters are usually designed in full, i.e. as CF type II.