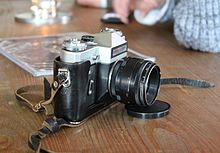 A camera (short for photographic apparatus , in the technical sense still camera , camera ; lat. Camera obscura "dark chamber") is a device for taking and storing a single image (still) or a short series of individual images. Colloquially, the terms notch and photo are also used in German . In contrast, there are motion picture cameras , so film cameras , video cameras and digital cinema cameras whose primary purpose is to hold continuous image sequences.

The camera, which stores images on film , has been replaced by digital technology in most areas, especially in the consumer sector.

The short form cam derived from the English term camera is used in abbreviated made-up words such as B. webcam , screen cam or digicam (for digital camera ) used.

In particular in the field of digital cameras and digital camcorders , the transitions are fluid; some camera models can also record short film sequences, and most camcorders support frame-by-frame recording.

The imaging system of a camera is a combination of lens and diaphragm, the distance of which from the film can be changed. The lens is a system of lenses that act as a collecting lens. By combining different lenses (partly made of different types of glass ), color errors and distortions - especially at the edges of the image - are avoided.

Two parameters are essential for the lens:

With SLR cameras, before and after the recording, the light that hits the lens is deflected to the viewfinder by a mirror and a prism. This has the advantage that you can see the image section ( field of view ) in the viewfinder that is visible on the film when you take the picture.

In viewfinder cameras, the viewfinder and lens are decoupled. Particularly when taking close-ups, it can happen that the image section seen in the viewfinder does not exactly match what is later to be seen on the film. This disadvantage is partially compensated by the possibility of a very compact design.

The name giver for the entire class of cameras is the camera obscura "dark chamber". This did not yet have the chemical film for image recording and initially only had a small hole instead of a lens . She projected her image onto a surface (for example in a walk-in box, that is, a giant pinhole camera), a screen or table top, and was used to produce realistic drawings.

The technical development of the camera described here went hand in hand with the history of photography . The first cameras that were constructed for photography were camerae obscurae made of wood; they were produced in series by Louis Daguerre ( daguerreotype ) by his brother-in-law Giroux and previously from 1839 by the Susse Frères company , but also by various opticians as individual pieces.

Historically, the development of the camera was based on the knowledge of the special case of the parallelism of film (F), lens (O) and accordingly also the plane of focus (S), which is still considered a normal camera today. The flexible camera construction (e.g. bellows) initially only served to adjust the distance.

Voigtländer presented the first all-metal camera in 1841; after 1839 Carl August von Steinheil constructed the first lens calculated according to physical principles. This was improved in 1840 by Josef Petzval , who designed the Petzval lens ; It was the first ever bright lens: It had a light intensity of 1: 3.7, i.e. 16 times more light than the lens of Daguerre's camera.

Friedrich Wilhelm Enzmann is considered the founder of the production of cameras in Germany , who advertised his products in the Dresdner Anzeiger as early as 1839 .

A camera has three basic components: a lens bundles light and projects it onto an image plane; this device is usually a lens , but pinhole cameras only use a small opening in the front of the camera body . A mechanical or electronic shutter controls the duration of exposure of the recording medium. The shutter controls the light inlet.

Beyond a specific construction, the "general camera" (short: AF ) works as follows:

Three levels form the basic system of the general camera, the (F) film, the (O) lens and the (S) focus level. The two camera planes F and O are light-tight, rotatable and movable in the AF.

Given that parallels meet at infinity ( projective geometry ), all three always have a common point of intersection (or a line of intersection) in space, which is determined by the positions of F and O and - depending on the angle of inclination to each other - more or less far from AF.

The plane S arises at this intersection FO and runs over the focused point of the objective on the objective axis (not perpendicular to the plane of focus S).

If the intersection of the two camera planes is infinitely far away from the camera (AF), a special case occurs that aligns all three planes parallel to one another (today's and historical "normal camera").

In order to make AF mechanically practicable, it is necessary to be able to set F and O in such a way that a line analogous to a hinge is generated from the intersection of the two camera planes (through common horizontal or vertical alignment of the camera standards, for example, in the film and lens plane are attached). After this initial setting, the levels can only meet at one point instead of in a line during the further setting (if both standards are rotated in opposite directions - e.g. one vertically and one horizontally).

In practice, this creates a sharp body; this is the focus area . At the end of the cone of rays shortly before or behind the film plane, circles of confusion (Z) are imaged on it, which are still accepted as sharp by the eye up to a certain size and therefore still appear sharp.

The aperture in the lens , which controls the passage of light through the lens, determines the size of the circles of confusion: The smaller aperture creates cones of rays with smaller radii and more acute angles that fall on the film, and thus smaller circles of confusion that are correspondingly sharper appear.

In AF, the sharpening body is a wedge; it begins on the focal plane (!) only at the distance of the camera extension (distance F to O) parallel to the film plane (under the lens). In the wedge, the sharpness extends to infinity. In the special case - F and O are parallel - the focus area results as a sharp block and not as a wedge (because technically limited by the AF).

The sharpness wedge is defined in its section (side view) by 1. its zero point (in sketch: under the lens), 2. the near point N and 3. the far point F of the sharpness on the lens axis; N and F result from the nominal distance setting of the focal plane S and the specific focal length of the lens. N and F (near and far point of focus) also result from knowledge of the lens and the focus plane S lying almost exactly in the middle between them; N and F can therefore be determined using calculations (e.g. using the interactive table by Striewisch / Kluge; see below).

With the values ​​for N, S and F, the distance from the zero point to the lens axis (D) and the standardized size Z (circle of confusion per film format), the wedge can be calculated (for this, N, S, F can be obtained e.g. from Striewisch / Kluge = Interactive depth of field calculator ( Memento from November 16, 2007 in the Internet Archive ); Z for small format cameras 0.03 mm, for medium format cameras approx. 6 × 7 cm 0.05 mm, for large format cameras 9 × 12 cm 0.09 mm to 0.1 mm and more depending on the image or recording format ).

Here, D = distance from the objective axis to the start of the wedge; S = focus setting on lens axis; A = camera extract; N = near point of the determined focal length on the lens axis.

In simplified terms, this angle can be doubled for the entire sharpness wedge.

Lenses are lens systems that are combined with an aperture (and often a shutter ). From the same location, on the same optical axis, they all draw the same picture of the subject, i.e. draw the same areas and angles with different image sections - like with a zoom lens , in which different focal lengths are fluidly connected with one another.

Normal lenses have roughly the same diagonal as the focal length. Lenses with a wider viewing angle ( wide-angle lens ) record more of the subject, smaller. Lenses with a smaller viewing angle (distance lens) record less of the larger subject. Correspondingly, the circles of confusion are enlarged in the latter and the focus area becomes smaller (especially small for macro shots ).

Long-range lenses - with a small viewing angle - differ from telephoto lenses in that the latter contain a magnification system (tele converter) within the lens system and are therefore shorter in their overall length than their focal length.

Focussing closer distances to the subject than infinity requires longer extensions of the camera (double the focal length is necessary for the 1: 1 scale).

Cameras can be distinguished on the basis of numerous criteria, e.g. B. by recording format, optical system, type of film used or area of ​​application. Due to the different classification criteria, a camera can also appear in several categories at the same time, for example a viewfinder camera can be a small image camera and a bellows camera at the same time. Cameras are classified primarily ...

a) according to the recording format

b) according to the optical construction

The image can be captured on film or an image sensor .

For camera systems of the larger formats (roll film cameras and view cameras) there were Polaroid backs, today digital camera backs are available as so-called digibacks .

On the basis of the recording medium, a distinction is made between cameras with chemical recording media (" analog cameras " with photographic film and instant cameras ) and electronic recording media ( digital cameras , still video cameras ). If a camera is able to adjust the focus itself with an active or passive procedure, it is called an autofocus camera . In all cases, the camera can be designed as a reflex camera or a viewfinder camera.

There are also various special cameras for specific technical areas of application, e.g. B. High-speed cameras , measurement cameras , panorama cameras , stereo cameras , topographic cameras , surveillance cameras , underwater cameras , thermal imaging / thermography / infrared cameras and two-room cameras . Another special type of camera is the Astrocam . It consists of a model rocket with a pocket camera in the tip and enables aerial photographs to be taken .

Historical cameras can also be classified and named according to the recording format, optical construction or film type. However, other historical terms have also become established:

Furthermore, a distinction can be made between film cameras (with roll film) and plate cameras with wet or dry plates and possibly with cassettes ( magazine camera ).