Taking pictures with a zoom lens

A zoom lens or short zoom is a lens with variable focal length .

Also in use are terms such as vario lens or vario system , rarely (the) transfokar or (the) transfokator . The technically correct designation for such lenses is pancratic system (from ancient Greek pan = everything and kratos = power, that means: an “omnipotent” optical construction with all focal lengths).

Zoom lens and vario lens are different names for the same lens type, as is also reflected in lens names (mount engravings). While the zoom and varifocal lenses keep the image distance constant when the focal length is changed, the image distance changes considerably with the vario focus lenses that were previously offered , which makes it necessary to readjust the focus. After the automatic focus setting (autofocus) had prevailed, a slight change in the image length when adjusting the focal length is accepted, even with many zoom and varifocal lenses, thus relieving the effort for optical correction.

Depending on the focal length range covered, there are different names (all focal lengths in 35 mm equivalent):

Standard zooms that cover even more of the telephoto range are called universal zooms. Common examples here are 24–105 / 4 and 10 × superzooms with the bottom end like a standard zoom. 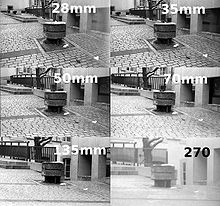 The displacement of lens elements in the lens (by rotating or sliding a ring on the lens or pressing a zoom button for zoom motor-driven, for example from compact cameras ) causes a change in the focal length. With high-quality cameras, the image section can be continuously adapted to the subject, with some simpler models, both analog and digital, often only more or less roughly graded. With some cameras and lenses it is possible to activate what is known as a step zoom , in which only a few typical focal lengths can be selected, which can be very useful , for example, when making panoramas .

Zoom lenses are an inexpensive and weight-saving alternative to a set of fixed focal length lenses that cover the range from wide-angle to telephoto lenses . In contrast to a fixed focal length lens does not become a focal length, but the focal lengths covered area specified on the lens (mm, for example 35-80 or 80-200 mm). Zoom lenses can also be used to advantage when there is no time (rapidly changing subjects) or opportunity (dust, sand, moisture, underwater, mountain climbing, etc.) to change lenses.

However, zooming only changes the image section, not the recording perspective . For example, zooming in on a film can not replace a tracking shot . However, many creative designs in the film sector can only be achieved with zooms, for example a camera movement with a simultaneous zoom ( dolly zoom ).

Zooms from a slight wide-angle range to a slight telephoto (35 mm to 80 or 115 mm in the 35 mm format) are increasingly part of the basic equipment of system cameras ; in compact digital cameras they have become practically standard. For system cameras, there are also pure wide-angle or tele zooms. Lenses with a zoom factor of more than five are often referred to as superzooms (examples: 28–200 mm or even 18–200 mm).

Zoom lenses with electromechanical adjustment of the focal length range are sometimes called power zoom and are mainly found in film cameras and cameras without interchangeable lenses. Manual setting predominates with photo system cameras, for which there are two options:

Lenses that only fall into the latter category are now rare. However, a significant number fall into both categories. Not all lenses are shortest at the smallest focal length. Some lenses that only fall into the first category are characterized by a constant length and are usually constructed in such a way that their center of gravity does not change significantly when zooming, which makes it easier to balance and use tripods. 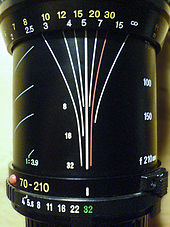 Manual zoom lens (70-210mm) set to the hyperfocal distance at f / 32 in 70mm.
The aperture curves clearly show how the depth of field decreases with increasing focal length.

The construction and manufacture of zoom lenses is more complex and expensive than that of fixed focal length optics. Their construction always forces a compromise of the necessary correction lenses for the individual focal lengths. Thus, the imaging performance of zoom lenses is often worse than that of lenses with a fixed focal length , apart from high-performance zoom lenses such as the manufacturers Cooke or Angénieux , which are mainly used in the film market and cost high five-figure sums. In addition, zoom lenses are usually weaker , that is, the minimum f-number is larger. In the 35mm format, around 4.5–5.6 are typical for 28–100 mm lenses (2.8 to 2.0 are occasionally achieved), whereas fixed focal length lenses have an aperture ratio of 1: 2.8 to 1: 1.4 ( in the extreme case 1: 0.95). Zooms are therefore less suitable for available light photography .

The exception to this are once again the high-quality lenses in the film sector, which often offer light intensities of 1: 1.4 (and possibly even more light). Very bright zoom lenses with autofocus (as of 2019) are the wide-angle Leica DG Vario-Summilux F1.7 / 10-25 mm for the Micro Four Thirds system with a continuous light intensity of 1: 1.7 and the standard zoom lens Canon RF 28 -70 mm f / 2 L USM for the RF bayonet with a continuous light intensity of f / 2.0.

In fact, it was only the introduction of aspherical lenses (i.e. those that do not represent a spherical segment) that allowed the construction of satisfactory pancratic systems that cover a zoom factor greater than about 3: 1, especially for zooms that extend into the wide-angle range. The enormous computational effort involved in the construction of optics with aspherical elements - sometimes with ten or twelve individual lenses (and a corresponding number of refractive surfaces) - was in turn only mastered by computer technology.

Many particularly compact digital cameras have zooms that can be moved into the camera housing using a motor. In these designs, compromises must often be made between optical requirements and the compulsion to be compact, so that lens errors are often not optimally corrected in such models and clearly visible chromatic aberrations and massive distortions occur, especially in the wide-angle range. Some cameras offer correction functions to compensate for these errors when saving the recordings.

The macro function for close-ups offered by many zooms does not replace a "real" macro lens that has been specially designed for large image scales . In particular, the curvature of the image field and the geometric distortions often lead to completely inadequate image quality in the close-up range, so that, for example, repro recordings cannot be sensibly carried out.

In the film sector, on the other hand, there are numerous creative possibilities through the use of zoom lenses that cannot be achieved with a fixed focal length. For example, Hitchcock combined tracking and zooming in Vertigo , which created a dynamic, unsettling change in size in the scene. Since then, this design has been nicknamed the "vertigo effect" (→  Dolly-Zoom ). Other intensive users of the zoom effect, such as Sergio Leone , Stanley Kubrick or Peter Jackson , also created a variety of artistic designs that can only be realized with zoom optics.

Zooms used in cinema and feature film production are the most expensive lenses commercially, significantly more expensive than fixed focal lengths. The zooms of the Angénieux Optimo series, which are widely used for feature films , currently (2010) cost more than 60,000 euros . Since it is usually custom-made, the delivery times are often more than a year.

As early as 1914, the Optische Anstalt Alexander Heinrich Rietzschel developed a simple lens with variable focal length for plate cameras, the telinear . In a brochure from the Rietzschel company from 1922, five telinear units are offered with zoom factors from 1.67 to 2.43 and focal lengths from 180 mm to 900 mm. Around the same time there was also from the company Plaubel & Co. a Zomm lens of the same type, the Tele-Peconar . This lens bears the DRGM mark on the frame , possibly an indication that the Telineare were built under license from Plaubel.

The construction principle of these lenses is simple: a concave lens is attached behind the lens within its focal length, the distance from the lens can be changed by turning the mount. The closer the diverging lens is brought to the objective, the greater the magnification and the lower the light intensity. This construction principle is also used in the teleconverter (in which, however, the distance between the objective and the diverging lens is constant due to the space available) and in the Galileo telescope .

In addition to the low light intensity, the main disadvantage of these early zoom lenses is that changing the focal length also shifts the level of sharpness; the photographer has to adjust the sharpness, which in turn changes the image section somewhat.

Another immediate predecessor of the zoom lenses was in 1928 by Hugh Ivan Gramatzki developed, manufactured by Siemens Transfokator . One of the first zoom lenses for the mass market in the photographic sector was the Zoomar 2.8 / 36-82 from Voigtländer , introduced in 1959 . Numerous similar constructions for SLR cameras followed. Today, lenses with electric drive elements can also be found in simpler small cameras.

In the film and television sector, lenses with a variable focal length replaced the previously frequently used nosepiece. For decades, television cameras with the well-known box-shaped clad lenses that can be swiveled in as required and each with a fixed focal length have shaped professional TV production. With the Super 8 narrow film format, varifocal lenses, some of them very high light intensity, were found at an early stage, since image errors were less of a consequence given the system-related limitations of the format.

The digital zoom is not a real , i.e. optical, zoom. In principle, only part of the image is cut out and stretched to its full size by means of interpolation , which is associated with more or less significant quality losses. In most cases it is advisable to forego the digital zoom and to create the image section manually on the computer .

Compared to the eye

The eye can only change its focal length in the sense of focusing. When looking at distant objects, the perception focuses on them and ignores the edge ; But it cannot bring the object closer ; in this respect, the human distant view is comparable to a digital zoom.

The cinematic stylistic device known as dolly zoom , also known as the vertigo effect , uses a tracking shot with simultaneous counter- zooming: the center of the image remains unchanged while the perspective shifts at the edges, as if the viewer were driving into a tunnel, but its end does not come closer. A typical application is the representation of a vertigo attack.