This article is about director Peter Jackson, for more people by that name, see Peter Jackson (disambiguation) . 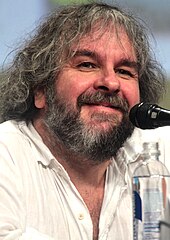 Sir Peter Jackson KNZM ONZ (born October 31, 1961 in Pukerua Bay , New Zealand ) is a New Zealand film director , film producer , screenwriter and actor . He was best known for his directorial work in the trilogy The Lord of the Rings , which received 17 Oscars , three of which went to him.

Jackson grew up in Pukerua Bay , about 30 kilometers north of Wellington . His parents, both British by birth , were Joan and William (Bill) Jackson. Even as a child, Jackson was an avid film fan and grew up listening to works by Ray Harryhausen and series such as Thunderbirds . At school he was more of a nerd. His old classmates remembered that he always wore an odd-looking duffle coat and wasn't particularly interested in topics like exercise.

Jackson began experimenting with a free Super 8 camera at a young age . His interest in filming grew after he first saw the classic King Kong and the White Woman (1933). At first, he dreamed of doing special effects as an adult . He and his best friend Pete O'Herne made the films Ponty Mython (a parody of Monty Python's Flying Circus ), Planet of the Peters (inspired by Planet of the Apes ), a film about World War II , for which he used the garden at home Trenches went through, as well as the short film The Valley , which was made for a competition but was not awarded a prize. At seventeen he dropped out of school to gain a foothold in the film industry, but was unsuccessful for the time being. From his first salary as a photolithographer at the Wellington Evening Post , he bought a camera and began working on his first short films.

One of his short film projects, the Roast of the Day , started in 1983 , developed into Jackson's first feature film. All roles were filled with friends and acquaintances; Jackson himself also played two characters. The plot went through a great development. If it was originally about a collection collector who is eaten by cannibals, it was later on aliens who disguise themselves as a rescue unit in order to eat the collection collector, and finally it was about a rescue team that rescues a collection collector from cannibal aliens. The work was only completed as a full-length feature film after four years, after the New Zealand Film Commission had granted support: Bad Taste , his first feature film, won a total of 16 fantasy and science fiction awards at festivals (including the Cannes Film Festival ). Now the local film industry became aware of him. The founder of the New Zealand Film Commission Jim Booth left it and worked as a producer with Peter Jackson until his death in 1994 .

In 1987 Jackson married Fran Walsh , who is also a big film fan and from then on worked on almost all of his projects as a screenwriter or co-producer.

Jackson shoots for television or works on special effects for productions. He often uses the chance to act as an extra or supporting actor in his films. His puppet film Meet the Feebles was classified as "not suitable for minors". With Braindead from 1992, the next work was a horror film , which today enjoys cult status, but was confiscated nationwide in Germany in the uncut version according to § 131 StGB . Jackson's work showed here a particularly strong reference to models such as Sam Raimi and George A. Romero , but also Buster Keaton and Monty Python. One speaks of the genre of “funsplatter”, which Jackson invented with Bad Taste and brought to perfection with Braindead .

The drama Heavenly Creatures , with Kate Winslet and Melanie Lynskey as teenage murderers, made him internationally known in 1994 when he received the Silver Lion of Venice and an Oscar nomination for best screenplay. 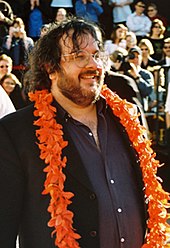 Together with his wife Fran Walsh he founded the film production company WingNut Films . He is also involved in the special effects company Weta Digital , which was founded in 1993. In 1996, The Frighteners appeared with Michael J. Fox in the lead role. The horror comedy deals with the business of death in a humorous way. Fox plays a ghost expeller who has seen the dead since a car accident and earns money with them by haunted various apartments. The film suffered from its bloated and complicated script on the one hand, and its shrill and implausible characters on the other. Nevertheless, Jackson managed an interesting mix of crime, ghost story, comedy and adventure that visually bridges the gap between Jackson's early works and his mainstream era.

With this trilogy, Jackson created a milestone in film history: all three parts together won 30 Oscar nominations and were ultimately awarded 17 Oscars. The third part received all 11 Oscars for which it was nominated (including the award for best picture and best director ). In addition, The Return of the King was the first fantasy film ever to be awarded the Oscar for best picture.

With the Lord of the Rings films, Jackson went from a New Zealand genre director to one of the most successful and well-known filmmakers of our time. Although he then announced that he wanted to make a small film at low cost, his next project was the lavish remake of King Kong and the White Woman ( King Kong ), which was released worldwide on December 14, 2005. Even if the film grossed millions at the box office, it still fell short of the very high expectations.

In 2007 Peter Jackson had a small guest appearance in the comedy Hot Fuzz , disguised as Santa Claus, who sticks a knife through the hand of the main character of the film.

The hobbit and other projects

Peter Jackson at the world premiere of The Hobbit: An Unexpected Journey (2012)

Peter Jackson's next big project was the film adaptation of Tolkien's The Hobbit in three parts. The three films were produced by Warner Bros. in cooperation with Metro-Goldwyn-Mayer . The financing and international sales were taken over by Warner Bros. Peter Jackson directed the film himself. He is also the executive producer with his wife Fran Walsh . Peter Jackson wrote the scripts with Fran Walsh, Philippa Boyens and Guillermo del Toro . Various actors (e.g. Ian McKellen , Andy Serkis ) and creative collaborators (e.g. Alan Lee ) from the time of The Lord of the Rings have taken on their roles again in this project. Howard Shore worked on the music, and in various interviews he said he had found some musical elements at the time he was working on The Lord of the Rings . Filming began on March 21, 2011. The world premiere of the first part took place on November 28, 2012.

Jackson has an option to film Naomi Novik's Temeraire romance cycle, which mixes historical elements with fantastic elements. Jackson said in an interview with the website aintitcoolnews.com that he clearly sees a formative element of his cinematic work in the amalgamation of historicity and fantasy.

Jackson is still toying with the idea of continuing Bad Taste and The Frighteners . The planned filming of the video game Halo has been put on hold for the time being, Jackson said in a press release. Neither Universal nor Fox agreed to the contracts to finance the film.

He also paid a visit to a photographer in the Westphalian town of Werl to talk to him in detail about the destruction of the Möhne barrier wall as part of Operation Chastise during the Second World War. This topic will be dealt with in the film The Dam Busters , which is a remake of the film of the same name from 1955, in which famous actors such as Richard Todd and Michael Redgrave starred at the time. Jackson's longtime employee, designer and storyboarder Christian Rivers, is to direct the film.

Since the fall of 2007, Jackson has been working with Steven Spielberg on three Tim-and-Struppi films. The first part of the trilogy is entitled The Adventures of Tintin - The Secret of the Unicorn . It is not yet clear whether he will direct the second of the three films as planned. The trilogy is using motion capture technology as a CGI - animated films rotated. The cinema release was in Germany in October 2011.

The music documentary Planes, Trains and Eric was released on October 31, 2014 . There Jackson produced a mixture of travel events and concert material for the world star together with Eric Clapton .

During the London Film Festival published in 2018 Jackson documentary They Shall Not Grow Old about life at the front and in the home of British soldiers during the First World War , in the next archival footage and witnesses in the form of diary entries and with the help of lip readers about VoiceOver to Word come. Jackson had a total of over 600 hours of footage from the archives of the Imperial War Museum to choose from, which he colored and transformed in 3D and compressed to a length of 99 minutes. Peter Jackson dedicated the film to his own grandfather, who lived through the First World War as a soldier. In an interview at the premiere he said of the film: “War is horrible - we didn't want to make it more horrific than it is. But we didn't want to play it down either. ”The film was originally supposed to be shown in selected British cinemas on just one evening. The premiere on the BBC is planned for November 11, 2018, the day of the armistice in World War I. Due to the positive feedback and the good result, a further publication in other parts of the world is possible.

On November 27, 2018, the movie Mortal Engines: War of the Cities premiered, in which Jackson is involved as both a screenwriter and a producer. The director took over Christian Rivers , has worked with the Jackson already on many projects.

Jackson has with Fran Walsh, who also received three Oscars for the third part of The Lord of the Rings trilogy as co-producer, co-author and co-songwriter , two children named Billy (* 1995) and Katie (* 1996), which can be seen in several small short appearances in the fantasy trilogy and at the beginning of King Kong . Billy can also be seen in the scene with the babies in the floating walkways in The Frighteners . 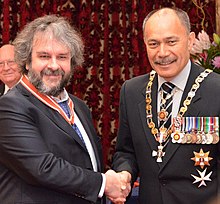