As a special effect ( English special effect ), and Special FX (of English onomatopoeic "ef-ek") or short SPFX or SFX (ambiguous with SFX - sound effects ), a mechanical or chemical is technology referred to certain unusual phenomena, such as such as explosions, in theater or film . In contrast to the visual effects (VFX), special effects are created and filmed directly on location. This means that the desired result can be checked immediately.

The special effects are closely related to other institutions such as stunt technique and mask . The transition is often fluid.

In body painting ( bodypainting ) special effects are called the art form in which , in addition to paint applied to the body by brush , sponge and / or airbrush , additional "attachments" such as latex masks, wigs or the like serve as an extension to the total work of art . 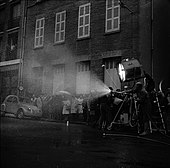 Basically, all effects increase the sensual impressions of reality (especially visual and auditory), but they can also be used to exaggerate them in a parodic way. Special effects are not only aimed at increasing the viewer's experience, but can also keep the viewer at a distance by referring to their fictional awareness. In genres such as B. Horror or science fiction film, special effects are used to create shock images. They attract the attention of the audience by showing what is special about horror.