If other gases or mixtures are used instead of air, one speaks of compressed gas . 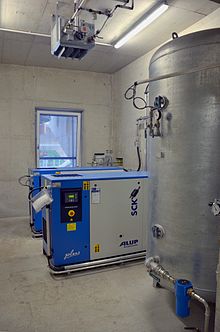 Historically, compressed air at low pressure through bellows , for example, for a forge eat or generates a church organ. Compressed air for filling inflatable boats is still generated today by large-volume hand pumps or foot-operated bellows.

Depending on the intended use, air is brought to a higher pressure with compressors and treated differently depending on the application. The energy expenditure when compressing is considerable, since a lot of thermal energy is generated, which usually remains unused. Compressed air is therefore an expensive energy source . With rising energy prices and in combination with heat recovery and regular leak repair, the costs can be reduced significantly.

In addition to the use of so-called load / no-load compressors, which have their best energy yield with continuous operation, there have also been models with frequency control for some years . The advantage of this technology is that the motor power and the required amount of compressed air are always controlled by a control system, which then increases or decreases the speed of the compressor element. According to various manufacturers, savings of 50% and more should be possible here.

If atmospheric air is compressed, the dew point temperature increases with the partial pressure of the humidity contained as vapor . Because of the simultaneous increase in temperature, the relative humidity drops. If the compressed air cools below its new pressure dew point , the moisture can condense. This is why compressed air is often dehumidified with refrigeration dryers immediately after compression . The pressure dew point is set so that it is below the storage and transport temperature. Depending on the size and type of the system, hygroscopic materials are also used for drying.

In order to linguistically differentiate the (pressure) dew point of compressed air from the dew point of uncompressed air, the latter is also called the atmospheric dew point . This means that the compressed air can also be used at lower ambient temperatures without water condensing in the pressure lines or transport containers.

Direct losses can be all leaks in which compressed air escapes unused on the way from generation to use from the compressed air pipeline or the installed systems and devices. Even today, depending on the design, around 10% losses are factored in when calculating the compressed air requirement. However, if the leaks are eliminated, the running time of the compressors can be reduced and an already installed auxiliary compressor can only be used rarely or not at all.

Indirect losses result from incorrectly planned and dimensioned compressed air piping. Long stub lines are installed, although a ring line would be better. Smaller diameters are selected, although the higher investment for a larger diameter pays for itself very quickly in operation. The indirect losses are the pressure losses caused by the flowing compressed air in the pipeline. Whenever there is insufficient pressure at the point of demand, an insufficiently large compressor is often thought of. Often, however, an optimization of the compressed air pipeline can solve the problem and, in the best case, the pressure on the compressor can also be reduced.

Sudden relaxation when disconnecting the compressed air connection can cause the so-called whiplash effect. In order to avoid this, the employers' liability insurance association requires the use of safety quick-release couplings in accordance with ISO standard 4414 and safety standard EN 983 "... quick-release couplings must be selected so that when they are coupled or uncoupled, the pressure does not throw the coupling part dangerously away ...".

Compressed air is used to drive of cylinders , turbines or even pneumatic tube used with the air while relaxing the energy in linear motion is converted or rotational movement. The compressed air can be mixed with oil here . The oil acts as a lubricant .

In rail operations, compressed air is used to control rail vehicles and as an energy source for the compressed air brake . Air brakes are also used in road traffic, especially in trucks .

At the end of the 19th century, compressed air networks for energy distribution were created, as electrical energy transmission with alternating current was still in its infancy at that time . From 1888 a larger compressed air network was built in Paris to drive elevators , sewage pumps , direct current generators and other machines. The pipes were laid in the sewers , where, unlike electrical cables, they were not affected by moisture. The network reached a length of 900 km in the 1960s. The 400 million cubic meters of air used annually were generated by three compressor systems. The network was only stopped in 1994.

Compressed air was used in the first vehicles of the Train du Mont-Blanc from 1901 to control multiple units . The vehicles were connected by two air lines running through the entire train - one for forward travel, the other for reverse. The five speed levels of the railcars were indicated by different pressures in the lines.

In Paris, in addition to the compressed air network for energy transmission, there was also a system for operating a clock system , whereby the slave clocks were synchronized with the master clock via compressed air pulses of 0.75 bar emitted every minute. The network, the lines of which were laid in the sewer system, began operating on December 31, 1880. In 1887 the largest expansion was achieved with 7050 watches for 3185 subscribers. In 1927 the company was closed.

Air is either distributed as purified and processed breathing gas in a stationary compressed air network, for example in a hospital , or stored in compressed air cylinders by means of respiratory protection compressors to reduce space and, if necessary, used via regulators for breathing with breathing apparatus and for scuba diving . Relaxed compressed air contains a very low relative humidity due to the dehumidification , so for long-term use on (intubated) patients it has to be supplied with artificial humidity to prevent the lungs from drying out.

When using special breathing gases, for example when diving with nitrox , only oil-free compressed air may be added.

Relaxing the air in a nozzle creates a rapid flow of air that can be used to blow away particles and liquids .

In connection with abrasive particles, which are accelerated by compressed air, an intensive surface cleaning can be achieved with sand , ball or dry ice blasting .

Compressed air is used for cooling in many technical processes . This makes use of the fact that compressed air cools down during expansion due to the Joule-Thomson effect .

More and more users are using nitrogen generators to meet a company's nitrogen requirement (e.g. in the food industry). With the help of these generators, nitrogen is separated from the rest of the air in a special absorption process. The nitrogen obtained has a purity level of up to 99.999% (5.0).

Compressed air from compressed air cylinders is also used for certain other activities, such as filling lifting bags .

There were conducted flight tests in the USA in the 1950s, which were based on the vertically directed recoil of nozzles with compressed air from a high-pressure cylinder package.

As an energy source or for cleaning, compressed air usually has a pressure of 6 to 8  bar . In individual cases up to 16 bar are required. For starting large engines e.g. B. in ships, compressed air with 20 to 30 bar is used to either operate a compressed air starter, or to direct the compressed air directly into one or more combustion chambers and thus set the engine in motion. As breathing air for scuba diving, in breathing apparatus, the compressed air in the bottles or cartridges is below 200 to 300 bar. Special bottles (made of CFRP, for example ) are also filled, which are used at pressures of up to 300 bar in portable compressed air tools ( pneumatic nailers ) or compressed air guns . When conveying bulk materials pneumatically, pressures below 4.5 bar are generally required.

Use as a warehouse

In air bearings , moving parts can be stored almost without friction.

The air cushion table is a level application .