A stonemason works with a pneumatic hammer

A pneumatic hammer (colloquially jackhammer , also called "boxer" in Ruhr mining) is a mobile machine in which a piston, driven by air , transmits an impulse to a tool, the chisel . The compressed air is generated by a motor-driven compressor and fed to the hammer via a connecting hose.

Pneumatic hammers are available in a wide variety of designs, from lightweight one-handed tools to heavy, two-handed construction tools to tools that are attached to excavators . They are also used in the stonemasonry for a variety of tasks, for example to work off natural stone surfaces or to produce hand-written stone scripts .

In addition to pneumatic hammers, there are also electric and gasoline-powered demolition hammers .

When the compressor is started, the compressed air flows through the robust hose to the pneumatic hammer. There the hammer is set in motion by a manually operated valve. During operation, the compressed air reaches the working cylinder of the device via a valve mechanism. A piston is accelerated by the air flowing in towards the chisel tip, where it hits a hammer. The impulse is transmitted through the rapid braking . The impact energy reaches the chisel via the hammer. The return of the piston to its starting position is controlled by air or a return spring. The combination of high impulse, small chisel point and the two-handed application of the tool results in enormous power, which makes the jackhammer an indispensable tool when building roads (breaking up existing roads) or demolishing buildings.

Vibrations introduced into the body by pneumatic hammers can lead to an occupational disease ( vibration-related vasospastic syndrome ). In addition, the air that rhythmically escapes from the hammer makes this tool one of the loudest in civil engineering. Some manufacturers offer both vibration and noise damping. Nevertheless, you should definitely use hearing protection and protective glasses. Especially when chiselling of concrete fragments may hit the eye. 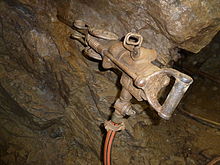 The first pneumatic hammers were used in mining and foundry technology where compressed air was already available, for example a pick hammer . Pneumatic rotary hammers were used for the first time during the construction of the Mont Cenis tunnel in Europe (1857–1870) . The drill was a development by Germain Sommeiller , a French engineer. As was customary later on, several rotary hammers were already mounted in parallel on a drill carriage running on rails. Compared to the previously used percussion drilling by hand, the holes for receiving the explosive charges could be made in a fraction of the time.

Similar drilling rigs were used in the construction of the Hoosac Tunnel in the USA in 1866 . The models used there were initially very prone to failure. Over 1000 devices failed in 4 months of tunnel construction. To use 5 to 6 hammers at the same time, 40 devices were required. The price of $ 400 for a hammer was enormous (a good revolver was under $ 10). The situation was improved by a new, reinforced model, which was launched on October 31, 1866. With the same performance, the failure rate was significantly lower. Only 2 to 3 machines were required to ensure the continuous use of a hammer.

Another patent for jackhammers was in 1904 the Herne Company Flottmann granted. The Flottmann rotary hammers were used for the first time in mining in the Ruhr area and increased the miners' conveying capacity enormously compared to conventional technology with hammer and chisel and pickaxes.

With the development of mobile compressors, the pneumatic hammer conquered numerous other applications, especially in the construction industry. The further development of these tools was always aimed at reducing the burden on people and the environment. Measures were: weight reduction and noise and vibration damping. A variant of pneumatic hammers is the hydraulic hammer . Instead of compressed air, hydraulic oil is used as a carrier medium for the energy.

The same technique pneumatic hammers were also used as riveting as still warm in the steel and shipbuilding riveted was. These hammers were equipped with the riveting tool instead of a chisel.

The air hammer must not be confused with an air hammer or a vibratory rammer .

The compressed air needle works on the same principle as a pneumatic hammer .