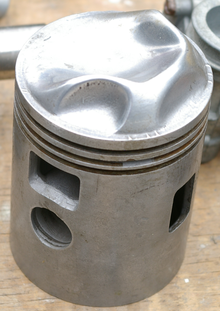 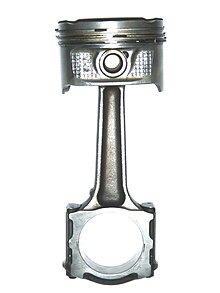 Pistons with connecting rods , piston pins and piston rings . The valve pockets can be seen at the top left and right

Two rotary lobes mesh with each other in the housing ( rotary lobe pump , Roots blower )

Wankel engine : the piston describes a circular path and rotates in the process

In mechanical engineering, pistons are movable components that, together with the surrounding housing, form a closed cavity, the volume of which changes due to movement . This principle can be implemented in various designs: with reciprocating pistons moving up and down, rotating rotary pistons or something else.

A simple, widespread design that was already known in antiquity is a round disc that is immersed in a tubular housing , the cylinder . The position of the piston in the housing determines the size of the cavity.

In engines , part of its energy is taken from a gaseous or liquid working medium in these variable cavities created in this way , which can then be used in a working machine . In pumps and compressors, on the other hand, energy is supplied, whereby the pressure and, in the case of gases, also the temperature of the medium increases.

Machines in which pistons transmit the energy belong to the piston machines . For energy transfer in the machine, the piston and housing can interact with inlet and outlet pipes and valves .

The piston, and rarely also the housing, is the component with which the energy exchange takes place. With reciprocating pistons, forces are usually introduced into the piston via crank drives with connecting rods or via piston rods . In free piston machines, the piston typically works on gas springs.

The shape of a piston, the material it is made of, its path and the speed at which it moves are subject to a variety of factors. The fluid used, the forces and temperatures that occur and the type of machine lead to very different designs.

The piston engines that are most widely used to date (2016) are the Otto engine (petrol) and the diesel engine . The use of the principle described above is explained here using this machine.

Pistons for reciprocating engines are now predominantly made of cast aluminum alloys , previously often made of cast iron . The blanks are cast in permanent molds , for some - especially for powerful engines - they are forged. The outer surface, valve pockets , piston ring grooves and the piston pin bore are then mechanically machined.

Technological differences exist between diesel and gasoline engine pistons due to the different combustion processes:

Diesel pistons are subject to higher thermal and mechanical loads and must therefore be reinforced in the first piston ring groove with a cast-in ring carrier made of austenitic cast iron ("Niresist") in order to prevent the groove from knocking out and material transfer to the ring through micro-welds. In the case of very heavily loaded pistons, brass bushings are stretched in the pin bore. Another characteristic feature of the pistons of direct injection diesel engines is the floor cavity in which the injected fuel is swirled and mixed with the air. Pistons subject to high thermal loads (especially racing, aviation or turbo- diesel engines) are often implemented with spray nozzles (for engine oil) to cool the piston crown. The piston can be provided with a circumferential oil channel or can only be cooled by injection molding on the bottom. In the case of large, slow-running engines, the piston can also be cooled by circulating cooling. The medium is fed to the piston through a telescopic tube.

Pistons in gasoline engines are characterized by their significantly lower wall thickness, which allows higher engine speeds due to their lower weight. In the area of ​​the first piston ring groove, hard anodizing can be used to reduce wear and tear and micro-welds.

The piston crown partially carries flat pockets to accommodate the valves protruding into the combustion chamber .

The piston skirt is used to guide the piston in the cylinder barrel and is coated with a lubricating varnish on most pistons. In older designs, it often has a cast steel strip on the inside ( control piston , “control plate”, “autothermal piston”) to control the increase in diameter when heated. To save weight, many high-speed four-stroke engines have the piston skirt on the sides (at the piston pin openings) offset inwards ("box" piston).

In articulated pistons, the sealing piston crown with the piston rings and the piston end, which transfers the side forces from the connecting rod to the cylinder, are two components that are articulated via the piston pin. The gap between the two parts reduces the heat loss from the combustion chamber.

The power transmission from the piston to the connecting rod takes place via the piston pin . This is stored in a hole in the piston in the inwardly thickened part of the shirt. This bore often has grooves at the end for retaining rings ("Seeger rings") in order to limit the lateral movement of the piston pin.

Displacement of the piston pin

Pistons without (left) and with (right) piston pin offset