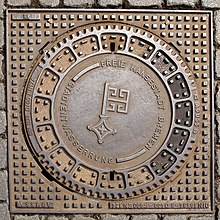 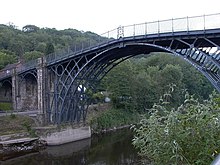 First cast iron bridge in the world at Ironbridge 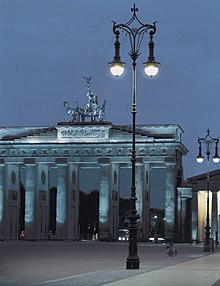 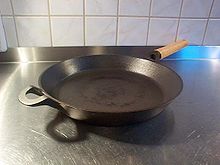 Cast iron is an iron material with a high carbon content ( mass fraction over 2%), which distinguishes this material from steel . Cast iron has good castability (low melting point, low viscosity melt, ...), but cannot be worked by forging because it is hard and brittle . Steel, on the other hand, is relatively difficult to cast, but it is very easy to forge. The machinability of cast iron depends on the exact grade; with cast iron with flake graphite - the most common type - it is good. Its strength is lower than that of cast steel , but the damping is higher.

Cast iron is a group of iron- carbon alloys with a high proportion of carbon (> 2%). Many types also contain silicon , which improves castability, as well as other alloy components such as manganese , chromium or nickel . A distinction is made between

The density of cast iron is about 7.2  g / cm³ and is lower than the density of steel or pure iron (7.85 g / cm³). At around 1150 ° C, the material has a significantly lower melting point than steel in the eutectic range , but it cannot be forged due to the high carbon content, which leads to high hardness and brittleness and low plasticity . The melt is thin, so it is easier to cast than the higher-viscosity steel melt. In foundries it is usually melted in a cupola furnace .

Cast iron parts are more resistant to corrosion than steel, especially if the cast skin is not damaged. The corrosion resistance can be increased by adding silicon, chromium and nickel to the alloy.

A simple method for checking the quality of gray cast iron is to hit a right-angled edge with a hammer : it should leave a lasting impression without the edge splintering.

The simplest and most common type of cast iron is cast iron with lamellar graphite (designation according to the current European standard EN 1561 "GJL" or earlier according to DIN 1691 "GGL"), in which the graphite is in the form of thin, irregularly shaped lamellae. These lamellas act as notches when subjected to tensile loads, so the tensile strength is relatively low (“ predetermined breaking points ”). In contrast to tensile strength, the transmission of compressive stress is much better. The compressive strength is about a factor of 4 higher than the tensile strength.

Due to the lack of mobility in the non-uniform structure with the graphite lamellae and internal stresses, gray cast iron has no recognizable plasticity - it is a brittle material with good thermal conductivity , good damping properties and, due to its brittleness, good dimensional stiffness . Therefore, gray cast iron is particularly suitable for machine beds and frames. In addition, there are advantageous self-lubricating properties if the lamellae can be cut through machining and the graphite itself or other lubricants in its place can be “stored” in the cavities.

Cast iron with spheroidal graphite (nodular cast iron, ductile cast iron, designation GJS according to the current European standard EN 1563, formerly GGG according to DIN 1693), in which the graphite is more or less spherical, has better mechanical properties . This is achieved by desulphurising the melt by adding small amounts of magnesium , cerium or calcium shortly before pouring.

Ductile cast iron is preferred for pipelines in centrifugal casting .

Another important form is malleable cast iron , which after solidifying as Ledeburite is subjected to another annealing treatment ( tempering ):

These varieties can also tolerate minor plastic deformations without breaking. Such materials are typically used as malleable cast iron fittings in pipeline construction for screwed connections.

A more recent material development is cast iron with vermicular graphite (designation GJV according to the current ISO 16112, previously GGV). With him, the graphite is neither lamellar nor spherical, but rather as lumps that look like worms in the micrograph (vermiculus, Latin for worms). The mechanical properties of this material lie between that of cast iron with lamellar graphite and those of cast iron with spheroidal graphite . However, it is more difficult to manufacture and requires a melt treatment that is performed within tight tolerances.

The repair of cracked or broken castings is possible with the help of special procedures. In this way, metal bars can be pressed and caulked into chain holes made for this purpose across the course of the fracture or crack. In addition, threaded holes can be drilled in depth along the break line and screwed down with grub screws. The result is a non-positive and positive connection with high pressure tightness that prevents oils and gases from escaping.