The title of this article is ambiguous. Further meanings are listed under hammer (disambiguation) .

Machinist's hammer with track and fin

A hammer is a manually or mechanically driven tool that uses its accelerated mass (mostly) to exert heavy blows on the body. In the case of hand-operated hammers, depending on its mass and the length of the handle used, it is accelerated from the hand, elbow or shoulder joint - or from the upper body when held with both hands - after lifting (reaching out).

The hammer, in a handle- less version as a hand ax (made of worked stone with a proven age of 1.75 million years), is probably one of the oldest tools known to man .

For the most efficient possible transmission of impulse and energy , it is advisable to select the hammer mass adapted to the part to be driven - such as a nail , center punch , chisel or chisel . Gravity only helps when the hammer blows downwards. Carpenters and glaziers guide corresponding (slightly inclined) flat hammers horizontally over wooden or glass surfaces precisely into an inner edge. Using a short and stiff wire (rope), chain or pull bar, the swing of the hammer can also be converted into tensile force, for pulling out tent nails or pulling together prefabricated parquet flooring.

In order to process, smooth, deform material directly, e.g. B. driving and forging also to separate, or damaging or crushing, and a right head shape is flat from right required over spherical to pointed. Hammer heads can be made of many different materials such as hardened steel, titanium, but also of relatively soft copper , plastic or wood. A groove with a bay and a magnet on the top of the hammer head can be used to hold an iron nail for the first strike, allowing one-handed nailing. With a conical slot, a headed nail can be pulled out using the hammer as a lever.

The hammer consists of a head and a handle . The hammer head usually has a track and a fin . A fin is the wedge-shaped part of a hammer head. This part of the hammer is also called the tiller or narrow web. The flat or spherically shaped striking surface of a hammer is web. The cross-section of a track can be circular, oval, rectangular or, rarely, octagonal.

Usually the fin (tiller) runs across the handle. When the fin extends along the stem, i.e. the hammer cross percussion hammer . The fin is located either centrally of the hammer head (z. B. peen hammer ) or moved downwards (z. B. Schreiner Hammer ). The fin is usually rounded. The rounding radius depends on the intended use. A forging hammer (for Wrought and metal sculptor ) has a large radius , when Schlosserhammer it is much smaller, and the Maurerhammer there has a cutting edge . The hammer head can have a mass between a few grams up to several kilograms. Large mechanical hammers can weigh several tons (e.g. in industrial steel processing). The handle is fastened with a wedge in a forged or cast elliptical , occasionally also round (mason's hammer) opening in the hammer head, the eye . The middle part of the hammer head is called the house .

Besides the classic hammering (a sheet and a fin), there are those having two tracks (for example, hammers , mallets , Bossierhämmer, Polstererhämmer) or with two fins (for example, scale hammers or gel Hammer ). Purely single-lane versions are rarer, such as clamping, flat-bed and polishing hammers or forging hammers from the East Asian region such as Japan . American locksmith's hammers often have a spherical side instead of a fin, the hammer mass is cylindrical and the face is therefore circular. Such hammers are particularly suitable for driving and riveting work.

The hammer is one of the oldest tools . The original shape of the hammer is the stone taken in hand. Some species of monkeys use stones as percussion instruments to crack nuts. Primitive men will have behaved similarly. The hammer stones were worked on themselves and were used as hand axes for many thousands of years. The first hammers according to today's definition originated in the Neolithic with the development of stone axes .

In the Bronze Age the stone head was replaced by a metal head . Hammers have been used for forging since the smelting of metals . The Tubal-Cain mentioned in the Judeo-Christian creation story is considered to be the progenitor of all blacksmiths . The Greek philosopher Pythagoras is said to have founded the music theory on the basis of the scientifically inaccurate legend Pythagoras in the forge based on the sounds of hammers he observed .

As a rule, hammers are used in different areas of manufacturing . Among other things for smashing, hammering and shaping. An object can be struck into another body with a hammer, e.g. B. a nail in a wall. By means of a chisel or punches with the hammer can reshaped kinetic energy precisely and metered on the workpiece act.

Workpieces are also often formed , for example from sheet metal for driving or from solid iron for forging . When peening a narrow strip of the leaf z. B. a scythe , sight or sickle driven out by the fin of the hammer on an anvil to a very thin cutting edge and the scythe sharpened.

But there are also hammers that are not used for production. The uses are varied; they range from purely acoustic perception in public areas to symbolic and ceremonial use. Examples of this are the judge's hammer , the auction hammer (for auctions ), the box hammer and the foundation stone hammer . Another exception is the doctor's reflex hammer . 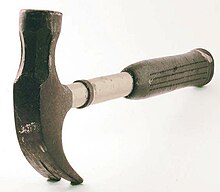 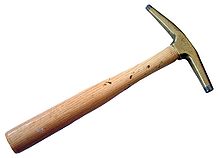 Welding hammer according to DIN 5133

There are different hammer shapes for different areas of application:

Already through the use of water power , but at the latest with industrialization , machines were also invented that reproduce the function of the hammer:

according to drive technology:

In acoustics, there is also the standard hammer mechanism , which is used for impact sound measurements.

The hammer is a symbol of strength and activity. As the typical tools of the blacksmiths that can deform iron, it is also assigned a powerful, terrifying aura.

The Teutons interpreted the lightning as a visible sign that Thor , the god of thunder , had hurled his hammer ( Mjölnir ) to earth . Since the god of thunder was also considered the protector of legal transactions and guardian of the country, the hammer was also used as a sacred device, for example to determine the right to land (hammer throw) . Furthermore, Thor was considered to be responsible for the consecration of marriage , so that the hammer was also seen as a symbol of fertility because of the fruitful meaning that was attached to the thunderstorm .

As a mallet , the hammer is part of the miner's symbol mallets and iron , which today symbolizes mining or work in general.

In the flag of the former Soviet Union ( hammer and sickle ) the hammer stands as a symbol for industry . The hammer was also included in the GDR's national coat of arms as a symbol for the working class , as well as in that of the Republic of Austria , there for the workers without communist reference.

The hammer is a common heraldic symbol, see hammers in Heraldry , Commons category

The second group of idioms revolves around auctions . Since these are ended in their original form with a hammer, the wording “get under the hammer” or “bring under the hammer” is used for things that are auctioned.

When a person's mind is doubted, it is sometimes said that they “have a hammer,” which means that they act like they were hit on the head with the hammer. A stupid thing or person is said to be "hammered".

Something that is particularly conspicuous, impressive or shocking that “hits” well is often referred to as the hammer .

The term mallet method refers to a clumsy and very direct type of mediation.

"Dropping the hammer" is a paraphrase for ending work on time.

When someone wants to “let the hammer go round”, they usually want to start a fight. The origin stems from forging , which was quick and easy to machine the glowing workpiece quickly.

"Anvil or hammer" from the poem Another by Johann Wolfgang von Goethe from the cycle of sociable songs , which says that in life you have to choose between: suffering or triumph (quote from the poem).

“The anvil lives longer than the hammer.” A saying from Italy.

"If you only have one hammer, every problem looks like a nail ." Proverb; In cognitive psychology , this saying has been known as the Law of the instrument since around 1964 .

Finally, the phrase “ got caught between hammer and anvil ” should be mentioned, which says that someone gets between two fronts and could be crushed with the force of a hammer that is struck on the anvil during forging. Or as a proverb: "Anyone who is between anvil and hammer will not lack misery ."

The (probably extinct) phrase den slegel (= hammer) tossing has been documented since the Middle Ages . Its meaning is not entirely clear, but it seems to refer to a farewell rite.