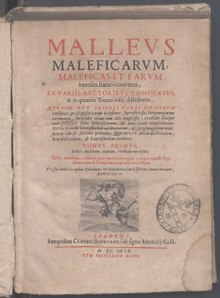 The Hexenhammer ( Latin Malleus maleficarum ) is a criminal codex that legitimizes the persecution of witches , which the theologian and Dominican Heinrich Kramer (Latinized Henricus Institoris ) published in Speyer in 1486 and which appeared in 29 editions until the 17th century. Jakob Sprenger is named as a co-author on the title pages of most of the older editions . However, according to a controversial research hypothesis, Sprenger was not involved.

The Hexenhammer came into being when Kramer failed with an inquisition in Innsbruck in the diocese of Brixen . In response to this defeat, he wrote his treatise to strengthen his position and justify the witch hunt before their opponents. He was under time pressure, which is clear from numerous errors in the numbering of the chapters, questions and cross-references.

In his book, Kramer and his assistant, the theologian Johannes Gremper, collect widespread views on witches and wizards . In the Hexenhammer , the existing prejudices are clearly presented and justified with scholastic arguments. Systematic persecution and extermination of the alleged witches is required through clear rules.

In order to justify his statements, Kramer placed the apostolic bull Summis desiderantes affectibus , also known as "witch bull", which he wrote himself and signed by Pope Innocent VIII in 1484 , before his work. In order to confirm the authenticity of the ecclesiastical document, he added a license to practice medicine from the notary's office at the University of Cologne in 1487 , but the authenticity of this license is questioned because this license was only distributed outside of the Cologne diocese . He also quoted important personalities such as B. Thomas Aquinas with his superstition theory (= theory of superstition ) and Augustine and Johannes Nider , the author of the work Formicarius . He also made frequent references to the Bible. He illustrated his theses with several dozen examples to illustrate how widespread and dangerous the work of (supposed) witches is. He wrote his work in Latin. The widespread use of the treatise Hexenhammer was also made possible by the invention of the printing press.

Laypeople and clerics who rejected the witch hunt were declared heretics in the Hexenhammer and consequently exposed to persecution: " Hairesis maxima est opera maleficarum non credere " (German: "It is a very great heresy not to believe in the work of witches" ). There was clear resistance to this font from some authors. The Spanish Inquisition, for example, declared the witch's hammer after a thorough examination as “unsuitable” (the Suprema , the supreme council of the Spanish Inquisition, ruled: “Because the author claims to have ascertained exactly the truth in things that are so created are that he can be deceived as easily as anyone else. "). Petrus Dusina , assessor at the Roman Inquisition Court , wrote around 1580 that the principles of the witch's hammer had "not been accepted by the Inquisition Tribunal ". In 1631 one of the best-known opponents of the witch trials, the Jesuit Friedrich Spee , anonymously published the Cautio Criminalis , in which he criticized the legal methods used in these trials, above all torture . In the Quaestio Nona of his pamphlet against Benedict Carpzov 1659, the lawyer and diplomat Justus Oldekop especially attends to the meeting of the devil and the "corporalem exportationem Veneficorum et sagarum (poisoners and witches) in montem Bructerorum, uffm Blocksberge" and elsewhere, and presents them Things - as in earlier writings - present as empty fantasy and clumsy superstitions, which must lead him from one “nullity” to another.

In his Dissertatio de crimine magiae 1701, the lawyer and enlightener Thomasius referred to the lack of evidence for the existence of witches and their pact with the devil .

A controversial research hypothesis is that Kramer named his brother Jakob Sprenger as a co-author in order to give the work more authority. In reality, however, Sprenger was not involved. At that time he was already known as an opponent of the persecution of witches and tried in vain to counter the allegation of his involvement in the witch hammer. Through his general, he also ensured that Kramer , who had meanwhile fled to Salzburg, had to give up his preaching position there. An indication of the misuse of the name is that Kramer only had the Hexenhammer published in Sprenger's sphere of activity under his own name, but in the rest of Germany also using the Sprenger name. He wanted to ensure that Sprenger learned of the abuse as late as possible. The printer-publisher Koberger only speaks of one author in the singular in his prints. In the Nuremberg edition of the printer Friedrich Peypus (1485–1534) from 1519 Heinrich Institoris and Jakob Sprenger are named as equal authors, at a time when both were long dead. The hypothesis that Sprenger was not involved remains highly controversial in recent research. New editor Christopher Mackay has made a number of arguments in favor of Sprenger's involvement. Kramer was the driving force, but Sprenger probably contributed the theoretical material in the first part of the work.

The Hexenhammer is written as a scholastic treatise and divided into three parts. The first part defines what is meant by a witch. Occasionally male wizards are mentioned, but mostly the female gender is referred to. Women are more susceptible to black magic than men. They were already disadvantaged at creation because God made Eve out of Adam's rib. In addition, women who are described as "the enemy of friendship, an inevitable punishment, a necessary evil, a natural temptation, a desirable disaster, a domestic danger, a pleasing harm, an evil of nature" are accused of deficits in faith. The witches hammer justifies this with an idiosyncratic etymology of the Latin word femina , which is derived from the Latin fides "belief" and minus "less". Women are assumed to be sexually insatiable. Therefore, they also have intimate contact with special demons ( Incubi ). The pact of the devil, together with the bad disposition of women and divine approval, forms the basis for the dreaded phenomenon of the witch. The men fell victim to the magic of women.

In the beginning, the Hexenhammer describes the witch trial against the Witch of Waldshut , which the inquisitor Johannes Gremper led in Waldshut in 1479 , one of the first witch trials in Germany.

In the second part of the work, the magical practices that relate to sexual intercourse and male impotence (by magic away the limb) dominate. The gender discrepancy is also evident in the distribution of roles in the relationship between magic and science. The men would be in positions that they would assume based on their knowledge, while the women would use magic and cause damage. In the second part, Kramer also describes how one can protect oneself from damage spell ( maleficium ) and how to reverse it.

In the third part he presents the detailed rules for the witch trials criticized by Spee and describes various cases. It describes exactly how a defendant is to be interrogated and under which conditions and rules the torture is to be used. Which torture practices should be used is only hinted at. There is no listing or detailed description of the torture, as is often wrongly assumed.

Overall, Institoris emphasizes the secular side of the crime more than the spiritual. Behind this fact, which at first glance seems astonishing, is probably the intention to involve the civil justice system more closely in the proceedings, since the chances of survival for the accused were much higher before church courts than before secular courts.

Older research ascribes the first edition of Malleus maleficarum in 1487/1488 to the Strasbourg printer Johann Prüss, according to Ludwig Hain's ( Ludwig Hain ) repertory. Today the printer Peter Drach in Speyer is considered to be the first printer of the work, based on the comparison of the printing types and according to the information in his account book.

By the end of 1500 6 Latin prints of the witch hammer appeared , all in separate editions, after Speyer also in Nuremberg and Cologne, then by 1523 another 7 or 8 editions in Metz, Cologne, Paris, Lyon and Nuremberg. After the first big wave of witch trials in the wake of the Reformation, there was a pause in publications, which is explained by a change in mentality.

Only 50 years later, from 1574 onwards, another 15 editions appeared in Latin, first individual prints in Venice, from 1580 and until 1669 mostly collective prints together with other witchcraft articles, especially in the printing cities of Frankfurt am Main and Lyon.

Complete translations were only made in the 20th century:

On the other hand, the work was never published in the Netherlands, for example.

Kramer legitimized the persecution of witches, but his work was officially neither ecclesiastically nor secularly recognized, even if he prefixed his book with the papal bull Summis desiderantes affectibus . There were hundreds of executions during Kramer's lifetime. The Canon episcopi , a canonical document based on an unknown source, which was over 500 years old at the time the Witch's Hammer was written and which had found its way into the most important collections of canon law, condemned the belief in witch flights in the company of pagan goddesses as an imagination of diabolical origin and Heresy. With his book, Kramer reacted to the witch's madness that already existed against this doctrine. He was forced to interpret the Canon episcopi in such a way that anyone who did not believe in witches would become a heretic. The term “ witch's sabbath ” coined here has anti-Judaistic roots (see also: Sabbath ). The witch's hammer subsequently found widespread use in America, with the witch trials in Salem being the best known.