Sorceress is a redirect to this article. For the opera by Pyotr Ilyich Tchaikovsky see Die Zauberin , for the film by Sebastian Brauneis (2018) see Magician (film) .

As a sorcerer or magician people are called, whose skills are not from the perspective of the observer in accordance with its previous interpretation of the environment and from him not religiously interpreted leave. 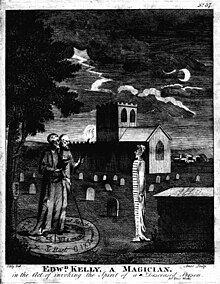 The term “magic” comes from the Middle High German zouber , the Old High German zaubar and probably the Middle Dutch tover for “magic”, which is probably derived from the Old English / Old Saxon word teafor for “red color, ocher, red chalk ”, which is used for writing was used by runes . Since the term “runes” means “secret knowledge”, a magician is therefore a “knower”.

The feminine word formation sorceress (instead of the misspelling sorceress ) is an example of a haplology .

In earlier cultures as well as among the followers of most ethnic religions, a distinction was not made between the profane and the spiritual in the perception of the environment, but interpreted everything magically, including knowledge (see also: Wild thinking ) . The meaning of the term "magician" as "knower" is identical for the Persian magicians , the Latin vates , the Celtic druids ( Drui ), the dervishes and the English wizards and witches . The ancient Egyptian god Thoth was equally responsible for writing, science and magic . Wizards were originally scientists and intellectuals , but also religious specialists such as the necromancers of many peoples. While the terms “magician”, “conjuring” and “ magic art ” also stand for magic in the magical sense, the term magician is used exclusively for deceptive entertainers . 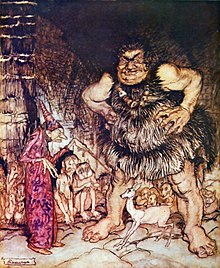 Most religions have accounts of miracles and miraculous people; everyday occurrences such as happiness, recovery from illness, etc. are often justified on religious grounds. If people claim healing successes etc. for themselves without appearing in the name of the prevailing religion, their abilities are not interpreted as religious in many cultures, but as something else, magic. Magic was already forbidden in the Hammurabi Codex , from which it follows that magic was something different from religion. In Egyptian mythology , too , a distinction was made between religion and sorcery, although priests could also be magicians at the same time, such as Imhotep .

In religiously tolerant Rome, the services of Celtic seers were accepted until the fourth century, when finally state persecution began against everything that contradicted the state religion. The Roman Church adopted this concept, discrediting religions other than superstition and sorcery. During the Christianization of the Celtic areas in particular, the structures found were adopted, but redefined as Christian ones and the Druidic roots embellished. Christianized historiography turned the druid Myrddin into the pagan magician Merlin , who only apparently subordinated himself to Christianity. The druid women, taken for granted by the Celts, became witches .

The different assessment of similar facts becomes particularly clear in the biblical contest between Simon Magus and Peter , of which identical deeds are reported. Clairvoyants , astrologers and necromancers are widespread in Christian cultures , which is often not perceived as an insurmountable contradiction in the population. Nevertheless, the term “magician” is always used disparagingly in this context, especially since the Bible forbids sorcery (Exodus 22:17, because you should not let sorcerers live ). As Creator, the God of the Bible claims sole power over everything supernatural. Through his (Holy) Spirit he calls people with supernatural gifts (in the New Testament often: spiritual gifts ). All other supernatural gifts and abilities are rejected.

Natural scientists with partly Christian influences and technicians like Albertus Magnus , Nostradamus or Gutenberg were often suspected of sorcery by their incomprehensible environment.

With the beginning of modern times, the witch hunt began. Not least because of this, witches and wizards are mostly to be found on the side of evil in fairy tales (e.g. with Hansel and Gretel).

In many cultures rulers have relied on druids, medicine men and shamans to religiously consolidate their claim to power. Druids were also active as scouts and advisers and came up with lists of wars such as fogging up battlefields by burning ash wood. Even after the Christianization of the formerly Celtic areas, many princes followed a two-pronged approach, making use of the healing arts, horoscopes and prophecies of the Druids. Since the druids were very learned, cultivated the fine arts such as music and still enjoyed a reputation among the people, they now conveyed high status as bards to their respective patrons. Even Charlemagne kept himself a court astrologer, although in accordance with the church he forbade his subjects astrology. The French synonym for magician, enchanteur (English: enchanter), reminds of their cultural function. The most prominent example of a magician as a political figure of integration is Merlin , whose myth was used in the Arthurian legend in the 12th century to legitimize the holder of the Welsh dragon throne and to offer the nation an identity-forming national history.

Up until the 17th century, aristocrats expected future predictions from Christian scientists, for example by means of astrology, which is unchristian in itself . In the last few centuries individual magicians moved in the orbit of power such as Cagliostro , Rasputin and Hanussen . Even in the 20th century, leaders of Western nations expected tactically useful information from astrologers.

Relationship between wizards in the magical sense and artists of deception

Since sorcerers and especially religious miracle workers and priests enjoy a high social position, the temptation is obvious to gain this status through deception. Ancient temple magicians, fakirs and clairvoyants often worked with tricks or used their knowledge of the laws of nature. Is known Alexander von Abonuteichos , who in the 2nd century n. Chr. Established a cult and it is also operated purported magic tricks. The most famous charlatan of the early modern period was "Count" Cagliostro . In order to counter the witch hunt with enlightenment, Reginald Scot wrote A Discovery of Witchcraft in 1584 , which for the first time disclosed the tricks of the jugglers to at least protect them. Entertaining magicians who, until the 19th century, left open the nature of their abilities, traditionally felt challenged to reveal what they believed to be deceitful miracles: the Victorian necromancer Daniel Dunglas Home rubbed the prominent illusionists John Henry Anderson and John Nevil Maskelyne . Star magic artist Harry Houdini made the unmasking of deceitful spiritualists his life's work. Even Fredo Marvelli unmasked false clairvoyant with fondness. For over three decades, New Age magician Uri Geller has been confronted with the illusionist James Randi , who doubts the existence of real magicians and who became the founder of the skeptic movement. Some camouflaged magicians succeeded in laboratory tests to convince parapsychologists of their magical abilities, see Project Alpha . One of the classic controversial questions among magicians is the discussion to what extent it is ethically justifiable to pose as a real mind reader or clairvoyant for entertainment purposes ( mentalists ) and thereby create misleading references for the open-minded.

While magical incantations were practiced in practically all cultures, the spoken word of a druid played a particularly important role among the Celts . So druids could forbid an impending battle on a battlefield with an appropriately authoritarian word. Curses from druids were a very serious punishment, and the banishment from the common sacrifice (analogous to excommunication) the end of the respective social existence. The mysterious nimbus of the druidic verbal magic also came from the fact that the druids did not use any script, so it was secret knowledge. (The druids themselves did not use runes either , which does not rule out that these were used "for private use" for magical purposes.) As Tacitus writes, the impressive curses of the opponent before battles by furious druids did not fail to have an intimidating effect.

Costume of the magician during the Bolivian dance Tobas

The fulfillment of primary needs was always required of sorcerers, such as the healing of illnesses, forecasting and influencing the weather, prophecies of all kinds and favoring in every situation. This often required a sacrifice. In addition to their magical abilities, magicians from all cultures worked as advisers, teachers, judges, scientists and artists. Many practices were reserved for magicians, for example requiring a completed druid training, while other practices such as the use of amulets and the like could also be carried out by laypeople.

Role of the magician in literature and film

While magicians were always rated negatively in Christian historiography and accordingly they were usually assigned the role of evil magicians in fairy tales , the European magician sagas received positive attention in the romantic era . The literature showed great interest in the magician archetype Merlin in particular . The popular figure of this magician, usually depicted as a white-bearded wizard, who as a wise teacher prepares the orphan boy Arthur for his mission as the chosen one, returns in the popular stories of our days in the form of the mostly Nordic magicians Gandalf , Miraculix and Albus Dumbledore . Literary magicians are mostly educated and knowledgeable about technology, but like the druids are characterized by a high degree of closeness to nature. They stand in fundamental contradiction to the enlightened and technologized world, which addresses a lost longing for spirituality and the supernatural in people. With the advent of fantasy literature in the 20th century in particular , the negative relationship with magicians has almost been reversed. Gandalf and Miraculix as representatives of (good) "white" magic are friendly older men. In fantasy, the practice of magic is often linked to a quantity of limited energy (e.g. mana ). In role-playing games , magicians are a popular class of characters.

Magician in the sense of deceitful artists

Since the 18th century, magicians , illusionists and sleight-makers have also been referred to colloquially as magicians or magicians . Magic in this sense is the art of creating illusions that come about through tricks and communication with the viewer. 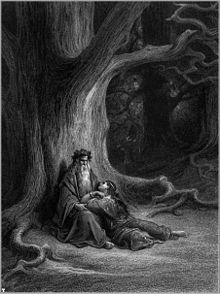 Magician in legends and traditions

Some fictional wizards of the 20th / 21st centuries Century