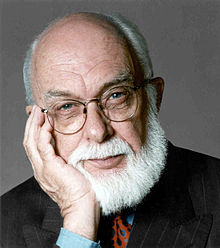 The opponent of pseudoscience known for his million-dollar challenge (One Million Dollar Paranormal Challenge) paranormal to prove skills.

Randi has been working as a professional stage magician and escape artist since the 1950s. He appeared between 1955 and 1961 as The Amazing Randi on the American TV show Wonderama . In the February 2, 1974 issue of the British magician's magazine Abracadabra , he challenged the magical society with the words: "I know of no calling which is based as much on mutual trust and faith as ours". Randi was close friends with the prominent mentalist Joseph Dunninger .

Randi stepped into the international spotlight when he denounced Uri Geller's public claims in the 1970s . In his book The Magic of Uri Geller , he portrayed Geller as a charlatan who used common magic tricks to perform his supposedly paranormal deeds. Geller responded with a series of injunctions , all of which were dismissed by the competent courts. So there were repeated public disputes between Randi and Geller. Since then, Geller has rejected scientific research into his alleged supernatural powers . The request to take part in the "One Million Dollar Challenge" by James Randi, he did not comply.

During a television appearance in 1973 on the Tonight Show with Johnny Carson , doubts arose for the first time in the mass audience about Geller's supposedly psychic abilities, since he was unable to perform his usual effects on television for the first time during the appearance. When preparing the show, James Randi had made sure that the props could not be manipulated by Geller.

Geller sued James Randi in 1991 for $ 15 million in damages based on an article by Randi published in the Herald Tribune on April 9, 1991. This was Geller's third lawsuit against Randi. The lawsuit, like all previous and subsequent ones, was dismissed. In an open letter from Berkshire- based Uri Geller Associates , Geller announced that he would "sue Randi in any country where it is possible for him to crack down on Randi's lies." What Randi says about him is not the truth.

James Randi has published numerous books dealing with the history of magic and popular errors and claims of the paranormal .

He denounces people as fraudsters and charlatans who harm and enrich other people with the help of alleged paranormal abilities. With his Alpha project , he achieved that the scientific investigation of alleged paranormal abilities is now generally regarded as a waste of time and has been practically abandoned at universities. Randi's exposure of the simple technical tricks television preacher Peter Popoff used to pretend he was getting information from God caused a sharp decline in Popoff's influence and popularity.

Randi is a founding member of the CSICOP (Committee for the Scientific Investigation of Claims of the Paranormal), today the Committee for Skeptical Inquiry (CSI), but because of the lawsuits brought against him by Uri Geller, he later resigned in order to protect the association from possible effects protect.

In 1996, Randi established the James Randi Educational Foundation (JREF). This organization encourages the investigation of paranormal claims and attempts to test them under controlled test conditions. She had offered a million dollar prize for the successful demonstration of supernatural abilities under scientific test conditions. After James Randi's retirement into private life, the "One Million Dollar Challenge" was discontinued in January 2015. Instead, the Board of Trustees decided to use the foundation's capital to financially support projects that encourage critical thinking and a factual worldview.

With the Alpha project from 1982 and 1983, Randi showed that parapsychologists are relatively easy to fool in their experiments.

James Smith McDonnell , CEO of McDonnell Douglas and supporters of parapsychology, donated 500,000 US dollars to the Washington University to be in St. Louis , Missouri , a McDonnell Laboratory for Psychical Research to found. The physicist Peter Phillips became head. At this facility, people who claimed to have psychic abilities were tested. Two of them, Michael Edwards and Steven Shaw ( Banachek ), did indeed seem particularly talented at being able to bend metal, to expose photographic films and to move objects through mental powers alone ( psychokinesis ). However, these two were amateur magicians who were friends with Randi and whom he had smuggled into the laboratory without the knowledge of the staff.

Randi also provided the parapsychologists with tips on how to prevent tricks, but his advice was ignored. Even when he launched the information that Edwards and Shaw had been smuggled by him as a rumor, the measures were not tightened. After positive results, the parapsychologists were convinced that the two test subjects actually had supernatural abilities and that they were holding proof of paranormal phenomena in their hands. A publication was prepared and interviews were given.

The McDonnell Laboratory was closed after Randi revealed the real identities of Edwards and Shaw.

A tribute to James Randi of the Independent Research Group, on TAM, July 2011

In 2014 the documentary An Honest Liar was released , which accompanies important stages in Randi's life. In addition to his career as a magician and skeptic, his private life is also examined. a. It is reported that Randi made his homosexuality public at the age of 81 and married his longtime significant other after legalizing same-sex marriage.

Parts of Randi's appearance at an atheist demonstration were used in the documentary The Unbelievers (2013).