This article covers the city in the United States. For further meanings, see Saint-Louis . 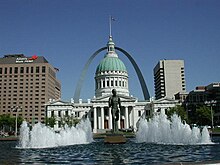 Construction of the Eads Bridge over the Mississippi River before 1874

The city is home to a number of major colleges such as Washington University , Saint Louis University, and the University of Missouri-St. Louis . The city used to be a major railway junction ; however, passenger traffic no longer plays a role today. In East St. Louis , on the east bank of the Mississippi in the state of Illinois, there are two marshalling yards .

Saint Louis also bears the nicknames The Gateway City and Mound City as well as the scene names The Lou and Nellyville, made famous by the local rapper Nelly .

About ten kilometers east of today's city center, on the then course of the Mississippi, was the largest city in pre-Columbian North America: the city of Cahokia , founded in the 7th century and a center of Mississippi culture , reached a population in the 12th century for which Estimates range from around 8,000 all the way up to 40,000. This made Cahokia the largest city ever built north of what is now Mexico, and Philadelphia only had such a population around 1800 . The city was famous for its earth pyramids ( mounds ) , similar to those of the Central American civilizations; the largest preserved, Monks Mound, has larger sides than the Giza Pyramids . The city was abandoned by its residents around 1400 for unknown reasons. When the first Europeans reached the area in the 17th century, they found the settlement area deserted. The Cahokia site has been a UNESCO World Heritage Site since 1982 .

The French trader Pierre Laclède Liguest and his New Orleans stepson Auguste Chouteau founded Saint Louis in 1763 as a trading post. The actual founding of the city took place on February 15, 1764. After the French and Indian War (1754–1763), St. Louis was under Spanish control, but - along with the rest of Louisiana  - was returned to France in the Napoleonic War .

The United States acquired the city in 1803 under President Thomas Jefferson as part of the Louisiana Purchase . Later, Saint Louis became the starting point for many expeditions to the west such as the Lewis and Clark expedition, as well as for fur hunters. Many settlers also started west from St. Louis.

During the Civil War , the site became the site of the Camp Jackson massacre in 1861 .

At that time, St. Louis had a population of 310,000 after New York, Brooklyn (at that time still independent) and Philadelphia in fourth place of the US cities. Chicago was able to prove, however, that St. Louis had added 90,000 residents who did not live in the inner city area. At the turn of the 20th century, the Gateway City was predicted to have a bright future due to its favorable location as the gateway to the west.

In the 19th century, there was a large influx of German immigrants to Saint Louis. The German share of the population of St. Louis in 1860 was about 60,000 of about 170,000 inhabitants. The large brewery Anheuser-Busch was founded in 1870 by Eberhard Anheuser from Bad Kreuznach and his son-in-law Adolphus Busch from Mainz-Kastel . The Church of St. Frances de Sales was built for the German Catholic community between 1895 and 1908 based on designs by the Berlin architect Engelbert Seibertz . On November 13th, 1898, after three days of festivities, St. Louis Place Park was decorated with a copy of the Schiller statue from Marbach am Neckar created by Ernst Rau in 1876 . This foundation was made by the master brewer Col. Charles Stifel. The Schiller statue was later moved to the Memorial Plaza near the town hall, where it still stands today.

In 1904, St. Louis hosted both the Olympic Games and the Louisiana Purchase Exposition , the World's Fair , which ran from April 30th to December 1st .

The largest population reached St. Louis in the 1950 census with 856,796. Since then the population has been decreasing continuously. The move from the city center to the surrounding area is particularly noticeable in the area around St. Louis Place Park and around the formerly glamorous St. Louis Avenue, on which horse-drawn trams were already running in 1875. Complete historical blocks of houses have been demolished there since the 1950s or testify, mostly as neglected ruins, of the once neat splendor of this up-and-coming quarter, which was particularly popular with German immigrants, since the 1880s. There were German communities of all denominations and schools in which German was taught.

In 2010, St. Louis, with a population of 319,294, is unlikely to have reached its lowest point in population; by one estimate, its population has continued to shrink since then. The city today has a demographic plurality of African Americans (47.1%). Compared to the well-developing suburban communities, the urban area is not very inviting for residential purposes. To the east on the Mississippi bank, the industrial and commercial zone stretches for around 15 kilometers, only interrupted by the Jefferson Memorial Park with the Gateway Arch. This partially run-down area prevents citizens from accessing the river bank. The inner city is criss-crossed by railways and elevated roads and filled with large sports facilities, shopping centers and huge parking lots. In the residential areas close to the city center in the north and south, some abandoned house plots have been cleared and converted into small green spaces, so that the city can now boast of over a thousand parks.

The flag of St. Louis was developed by Theodore Sizer ( Yale University ) and officially introduced in 1964. It symbolizes the confluence of the Mississippi and Missouri rivers near St. Louis. The intersection of the blue lines falls under a French lily ( fleur-de-lis ), symbolizing the city's French heritage. In a 2004 poll of the North American Vexillological Association website , the flag ranked fifth among American city flags.

In the 1950s and 1960s, St. Louis was a target for US Army military experiments with harmful chemicals and radioactive materials. The uranium fuel for Fermis Chicago Pile -1 was made from uranium ore by G. Mallinckrodt & Co in St. Louis. The resulting radioactive waste is stored, more or less kept secret, in a landfill there . There are protests from residents to this day against this landfill operated by the disposal company Republic Services , as an increased cancer rate has been recorded in the area .

The metropolitan area of ​​St. Louis generated a gross domestic product of 159.9 billion US dollars in 2016, making it 22nd among the metropolitan areas of the United States. The unemployment rate in St. Louis was 3.3 percent, below the national average of 3.8 percent (as of March 2018).

In a ranking of cities according to their quality of life, St. Louis ranked 70th out of 231 cities worldwide in 2018. In the US, only Detroit had a worse ranking.

In the 20th century , St. Louis was a major trading post and the fifth largest deposit in the United States due to its location on the Mississippi and Missouri Rivers and the railroad junction area .

St. Louis has two airports, Lambert-Saint Louis International Airport , next to which the works of the former McDonnell Douglas were located, and the smaller regional MidAmerica St. Louis Airport . Lambert International Airport was the seat and hub of the airline Trans World Airlines (TWA). The MidAmerica Airport was originally built to relieve the main airport. However, after its bankruptcy in April 2001, TWA was bought by American Airlines and soon after the function of the hub relocated to Chicago. As a result, however, the number of passengers there fell significantly, so that there was little need for another airport. For a long time, the MidAmerican Airport only reached a few tens of thousands of passengers per year. Most recently, however, the number of passengers rose to 157,000 in 2016. The only airline operating there is Allegiant Air .

The city is also served by Amtrak , with several train connections daily to Chicago and Kansas City , as well as daily to Dallas and San Antonio , Texas. Through vans continue to Los Angeles three times a week .

St. Louis is on the route of the once very important Route 66 from Chicago to Los Angeles. This street is also sung about in the popular hit Get your kick on Route 66 .

A light rail system opened in 1993 crosses the city with two lines in a west-east direction.

Saint Louis is home to the Saint Louis Symphony Orchestra , founded in 1880 , which has received six Grammy Awards in the course of its history and has been nominated for a total of 56 times. The Opera Theater of Saint Louis will be hosted in 1976.

In the 1990s, country singers became famous such as Uncle Tupelo and The Bottle Rockets. Back then, the rise of rapper Nelly (2000), the Saint Lunatics, Murphy Lees, Chingys, J-Kwons and Ebony Eyezs made Saint Louis one of the world centers of rap and hip hop . The city is therefore often mentioned in connection with New York City , Atlanta , Los Angeles and Detroit .

The white actor and musician Jim Byrnes , who lives in Canada and is known for his role as Joe Dawson in the television series Highlander and his music influenced by gospel and blues ( House of Refuge , 2007), comes from St. Louis Prog metal band Anacrusis as well as Dylan Brady , Ravenna Golden and Lewis Grant, who make experimental hip-hop.

→ Main article : List of personalities of the city of St. Louis

Counties in the US state of Missouri