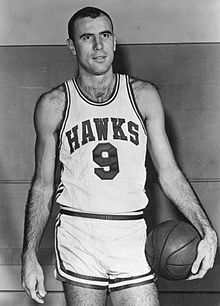 The Hawks were founded in 1946 as Buffalo Bisons , named with their move to the then so-called Tri-Cities region (now Quad Cities Iceland), consisting of the cities of Moline and Rock in Illinois and Davenport in Iowa but in Tri-Cities Blackhawks to . The name refers to Black Hawk (German Black Falcon ), a chief of the Sauk and Fox . The franchise originally played in the National Basketball League (NBL), but moved to the NBA after the end of the NBL in 1949 and reached the play-offs there in the 1949/50 season under the leadership of Red Auerbach . The erratic owner of the team, Ben Kerner, moved the team to Milwaukee , where they competed under the name Milwaukee Hawks from the 1951/52 season.

In 1953, the Hawks chose a future MVP trophy winner in the draft with Bob Pettit , but were initially unsuccessful and due to the increasing popularity of the newly established baseball club Milwaukee Braves , Kerner decided to move the team again and relocated the team for the season 1955/56 to St. Louis .

In 1957, the St. Louis Hawks team reached the finals for the first time, but lost the series 3-4 against the Boston Celtics . In the following season, the 1957/58 season , the team under coach Alex Hannum won the only NBA title to date against the Celtics, which should then begin their eight-year championship series.

In 1960 and 1961, the team was able to reach the finals, but lost them again against the Celtics. In 1968, Ben Kerner split from the Hawks and announced their sale to Tom Cousins ​​and Carl Sanders , former Georgia governor, on May 3rd. The Hawks then moved to Atlanta and today's Atlanta Hawks were born. It was like a “reunion” with the Braves, who had also moved to Atlanta. In the first two years in Atlanta, the team reached the division finals, but lost them to the Los Angeles Lakers and narrowly missed the NBA finals. The 1970s were shaped by show basketball. Pete Maravich and Lou Hudson formed a spectacular backcourt which was only moderately successful. After Maravich was transferred to New Orleans Jazz , the team collapsed completely and missed the playoffs four times between 1974 and 1977. Another reason for the failure was the fact that the rival league American Basketball Association (ABA) poached talented draft picks like David Thompson or Marvin Webster who never wore the jersey of the Hawks. After Ted Turner bought the team in 1977 and kept it in Atlanta, things went better again in terms of sport.

In 1982 the Hawks got a real superstar in Dominique Wilkins and were among the best teams in the league. Wilkins came as a rookie from the Utah Jazz and established himself in Atlanta as one of the most spectacular players in the league. In 1984 another important player joined the Hawks with Kevin Willis . Together with Wilkins and Doc Rivers , the Hawks always won 50 games or more from 1985 to 1989, never getting past the conference semifinals. In 1988 center star Moses Malone also joined the Hawks. However, the 33-year-old Malone had passed his zenith, so that his performance deteriorated in the years to come. Even in the 1990s under star coach Lenny Wilkens , the team achieved 50 wins or more several times, but always failed in the first round in the play-offs. In 1994 Wilkins was transferred to the Los Angeles Clippers for Danny Manning . The transfer surprised many experts, as Wilkins was the best player on the best team in the Eastern Conference at the time. The Hawks still won 57 games, for which Wilkins was named Coach of the Year . After the season, however, Manning and Willis left the team, which had to be rebuilt.

In the mid-1990s, new players such as Steve Smith , Christian Laettner or the Congolese center Dikembe Mutombo were signed . Mutombo formed the defensive backbone of the Hawks and won the NBA Defensive Player of the Year Award in 1996 and 1997 . In addition, Mookie Blaylock played one of the best defenders and playmakers with the Hawks. With this talented core, the playoffs were regularly reached until 1999. In 1999 Smith and Blaylock were sold. New signing Isaiah Rider could not meet the expectation, so that in the 1999/2000 season only 28 wins could be achieved and the playoffs were missed after eight years.

During the 2001 NBA draft , the Hawks chose the Spaniard Pau Gasol and transferred him to the Memphis Grizzlies in exchange for Shareef Abdur-Rahim . Even with a core of Abdur-Rahim, Glenn Robinson and Jason Terry , the Hawks could not reach the playoffs.

The Hawks in a game against the Milwaukee Bucks

In March 2004, the team, along with the Atlanta Thrashers ice hockey team , was sold to board members of Atlanta Spirit LLC. They shared the Philips Arena with them until they moved to Winnipeg in 2011 . But the Hawks faltered and were in the 2004/05 season with 13 wins the worst team in the NBA. In the following drafts in 2005 and 2006 they strengthened themselves with Marvin Williams and Shelden Williams , but they could not meet the high expectations. There were also positive bright spots, for example Josh Smith came along in 2004 , and Joe Johnson was brought in by the Phoenix Suns through the Free Agency . In the 2007 draft, the Dominican center Al Horford was committed. With this core, the team reached the play-offs again in 2008 after nine years of dry spell. 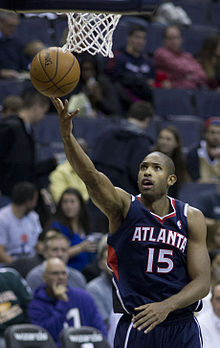 In the following two years, the team was able to reach the Conference semifinals, but lost them both times with 0-4 (against Cleveland and Orlando ). Also in 2011, the Hawks could reach the Conference semifinals, in which they were defeated by the Chicago Bulls . In the 2011/12 season, the Hawks achieved the third-best record in the Eastern Conference, but were eliminated in the first round against the Boston Celtics . On June 25th, Danny Ferry took over the position of manager of the Hawks. Ferry initiated a change and traded the star player Joe Johnson to the Brooklyn Nets , as well as the "eternal talent" Marvin Williams to the Utah Jazz .

The Hawks also made it into the play-offs in 2012/2013. But the Hawks did not get past the first round this time and had to admit defeat to the Indiana Pacers with 2-4 wins. After the end of the season, the Hawks announced the separation from head coach Larry Drew, his successor was Mike Budenholzer, who previously worked as an assistant coach for the San Antonio Spurs . In the 2013 NBA draft , the Hawks selected the German youngster Dennis Schröder with the 17th pick . In the summer of 2013, Josh Smith left the Atlanta Hawks and signed with the Detroit Pistons . The Hawks had already signed Forward Paul Millsap from the Utah Jazz at this point .

Despite the early failure of their star player Horford, the Hawks played a good 2013/14 season and qualified, not least thanks to Millsap and Jeff Teague , for the play-offs. In the first round, however, they were defeated by the conference best Indiana Pacers 3–4.

The 2014/15 season was one of the most successful for the Hawks. With Kyle Korver , Al Horford, Paul Millsap and Jeff Teague, the Hawks sent four players to an NBA All-Star Game for the first time . The team was able to book a club record with 60 wins and 22 defeats, making it the best record of the Eastern Conference. For this achievement, Trainer Budenholzer was named Trainer of the Year . After Harry Gallatin (1963), Richie Guerin (1968), Hubie Brown (1978), Mike Fratello (1986) and Lenny Wilkens (1994), he is the sixth Hawks trainer to receive this award. In the 2015 play-offs, the Hawks first met the Brooklyn Nets , who they beat 4-2. The Hawks also won the subsequent play-off series against the Washington Wizards with 4-2 and thus moved into the Conference Finals of the Eastern Conference. There, however, Atlanta had to admit defeat 0-4 to the Cleveland Cavaliers of LeBron James .

The following 2015/16 season was less successful. The Hawks held the core together, but some top performers like Korver and Teague could not or only partially call up their good performances from the previous year. In addition, DeMarre Carroll, an important player , left the team in the summer. Nevertheless, the Hawks reached the play-offs with 48 wins, but were eliminated again in the Conference semifinals against the Cleveland Cavaliers with 0-4.

In the summer of 2016, Teague and Horford left the Hawks and started a rebuilding. Former All-Star Dwight Howard was re-signed and returned to his hometown. Atlanta was able to celebrate its entry into the play-offs again with 43 wins. However, the Hawks lost the first round series against the Washington Wizards with 2-4.

In the summer of 2017, All-Star Paul Millsap left the Hawks after four years and moved to the Denver Nuggets . The other top performers Dwight Howard, Tim Hardaway, Jr. and Thabo Sefolosha also left the team. Therefore, a new structure was started around the German point guard Dennis Schröder. Supported by young players like John Collins and Taurean Prince , the Hawks closed the season with a record of 24 wins and 58 losses, so that the first season of the rebuilding ended far outside the playoff ranks in last place Eastern Conference. After the 2017/2018 season, head coach Mike Budenholzer also announced his departure from the Hawks and agreed with the club on an early termination of his contract.

On May 11, 2018, the franchise announced that Lloyd Pierce would become the Hawks' new head coach . Since 2007 Pierce has worked as an assistant coach for various teams in the NBA ( Cleveland Cavaliers , Golden State Warriors , Memphis Grizzlies and Philadelphia 76ers ). Now he is starting his first job as head coach. In the 2018 NBA draft , Atlanta selected top talent Luka Dončić in 3rd place , but he was swapped for the 5th pick of the draft, Point Guard Trae Young , and a future first-round pick. On July 19, the Hawks announced that previous franchise player Dennis Schröder and center Mike Muscala would be leaving the franchise in a three-team trade. In this deal, in which the Oklahoma City Thunder and the Philadelphia 76ers were involved, you got all-star Carmelo Anthony , who was sacked immediately, as well as Justin Anderson and a first-round pick for the NBA draft 2022. 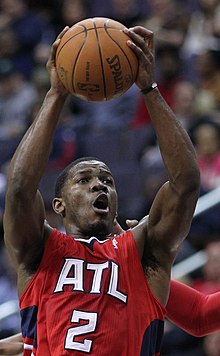 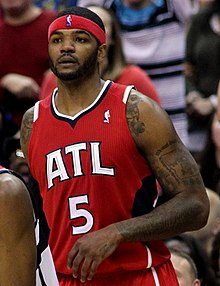