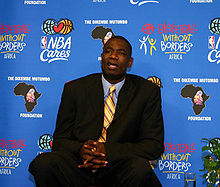 Along with Ben Wallace, Dikembe Mutombo is the only player to have received four "Defensive Player of the Year" awards

The NBA Defensive Player of the Year Award ( DPoY ) has been presented to the best defender in the North American basketball league NBA since 1983 . The jury consists of around 120 journalists (the same ones who also choose the Most Valuable Player ), each with a first, second and third vote. Record winners are currently Dikembe Mutombo and Ben Wallace , each with four awards (as of April 2020).

The number in brackets indicates how often that player has already won the award at the time.