The title of this article is ambiguous. Further meanings are listed under Zaire (disambiguation) .

Republic of Zaire ( French République du Zaïre ) was from October 27, 1971 to May 16, 1997 the name of the Democratic Republic of the Congo in Central Africa.

Reasons for the renaming

While the first renaming to distinguish it from the neighboring country still had practical reasons, the claim behind the name Zaire was an alleged "Africanization" of the state name. 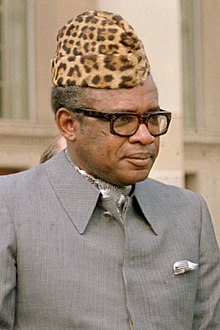 The name of the state was renamed on the instructions of the dictatorial ruling President Joseph-Désiré Mobutu, who "zairized" his own name to Mobutu Sese Seko (more precisely: Mobutu Sese Seko Kuku Ngbendu wa Zabanga). Mobutu had put himself to power in the wake of the so-called Congo turmoil in 1965 and when he took office there were actually a number of place names in the Congo that referred to the country's colonial past. The capital was still called Léopoldville, after the Belgian King Leopold II , under whose rule the most brutal phase of colonial exploitation of the Congo took place, which, under the name of the Congo Atrocities, had triggered worldwide outrage. The renaming to Kinshasa was therefore only logical for the sovereign state.

However, under Mobutu, the renaming policy became part of a state ideology that was referred to as authenticity or mobutism . Under the heading of authenticity , the renaming of places and people (Christian first names should be Africanized) were fundamentally ideologically inflated as a liberation from colonial degradation and neocolonialism , even in cases in which this argument was on weak feet. The state name "Congo", for example, could hardly be traced back to colonial roots, since it was already the name of the Kingdom of the Congo , and the new name "Zaire" had no tradition in the country.

The term "Zaire" itself is of European origin: At the time of the first contact with the Portuguese in the 15th century, nzere or nzadi ("the river that swallows all rivers") was the name used by the local population for the lower reaches of the Congo. The Portuguese finally corrupted this to "Zaire". The province of Zaire still exists today on the lower reaches of the Congo in Angola .