Leopoldville is a redirect to this article. See also: Léopoldville (ship, 1929)

Kinshasa [ kɪnˈʃaːza , French kinʃaˈsa ] (until May 3, 1966 French Léopoldville - short form Léoville , Dutch Leopoldstad ) is the capital of the Democratic Republic of the Congo .

The city has over 11.6 million inhabitants (2015), making it the third largest in Africa after Cairo and Lagos .

The capital district of the neutral city (French Ville neutre ) has the status of a province and is ruled by a governor who is appointed by the president. Kinshasa is the country's political, economic and cultural center. The city is the seat of the Congolese government, parliament, all central government agencies and numerous diplomatic missions.

Kinshasa is the country's most important transport hub with Ndjili International Airport and has numerous universities, colleges and museums.

Kinshasa is located at Pool Malebo on the Congo opposite Brazzaville , the capital of the Republic of the Congo , 350 meters above sea ​​level .

Before the breakthrough through the Lower Guinea Sill, the water-rich Congo builds up into a lake, the Malebo pool, which is around 30 kilometers long, 21 kilometers wide and a maximum of 16 meters deep.

The Congo is only navigable north of Pool Malebo .

Kinshasa is divided into 24 communities (communes) : 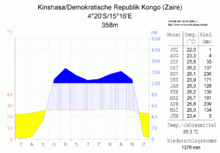 The city is located in the tropical climate zone . The annual average temperature is 25.3 degrees Celsius, and the annual precipitation is 1,378 millimeters.

Léopoldville shortly after it was founded (1885)

The place was founded on December 3, 1881 by Henry Morton Stanley as a trading post and named Léopoldville in honor of the then Belgian King Leopold II . From 1885 to 1908, the Congo Basin and its hinterland were Leopold's private property and the scene of the infamous Congo horrors . In 1898 the railway to the coastal town of Matadi was completed. After the capital of the Belgian Congo was moved from Boma to Léopoldville in 1923, the city experienced rapid growth.

Léopoldville had around 40,000 inhabitants in the mid-1930s, around 2,500 of them Europeans. In 1945 the population was estimated at 100,000. By the early 1950s, the number rose to 250,000, including 15,000 Europeans, and the city also had a university. Administratively, the University of Lovanium was affiliated with the Catholic University of Leuven .

Before independence, Léopoldville consisted of a European city and an African city (Quartier Indigène) , whereby the residents of one part were not allowed to enter the other after 9 p.m. without special ID. Around 1950 the city received the largest stadium in the Congo with 70,000 seats.

A Canadian study identified Léopoldville and Brazzaville as the cradles of the AIDS epidemic; the oldest positive blood sample comes from there (1959).

In 1960 Léopoldville was the largest city in Central Africa with around 400,000 inhabitants. With independence it became the capital of the independent Democratic Republic of the Congo. After Mobutu Sese Seko came to power in 1965 , Léopoldville was renamed in 1966 after the name of a former village of Kinshasa, which was in the urban area.

In September 1996 a rebellion began in the east of the country under the leadership of Laurent-Désiré Kabila , which was supported militarily by Rwanda and Uganda , reinforced among other things by the influx of refugees from Rwanda and Burundi . Although he was not taken seriously for a long time, Kabila succeeded in overthrowing the old, seriously ill and now internationally isolated Mobutu on May 16, 1997; he moved into Kinshasa with his troops and declared himself the new president on May 29, 1997.

On the morning of December 30, 2013, supporters of the evangelical preacher and militia leader Mutombo, armed with knives, carried out attacks on state television studios , Ndjili airport and the Tshatshi military base . One army colonel and 54 of the attackers died.

The following overview shows the official population figures according to the respective territorial status, in each case based on the administrative urban area. As in many other metropolises, large suburbs and satellite cities are increasingly emerging in Kinshasa, where the main population growth is taking place. The city has over 9.4 million inhabitants, the agglomeration of Kinshasa Brazzaville 10.3 million (2010). Lingala is the language of communication and trade for the population .

Kinshasa is one of the fastest growing cities in the world. For 2050 a population of 35 million is expected. According to the same forecast, by 2075 Kinshasa would be the largest city in the world with over 58 million inhabitants. 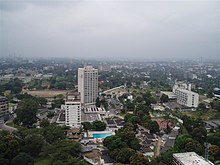 In the national museum of the capital (Musee National de Kinshasa) works of traditional Congolese art can be seen. The National Museum of the Democratic Republic of the Congo , built with South Korean support, has existed since 2019 . The University's museums (Musée de l'Université de Kinshasa) host prehistoric and ethnographic exhibitions. The university buildings are located in a rectangular complex near a slope on which a chapel stands. Lake Ma Valée lies between the hills and is surrounded by tropical rainforest.

The center of art in Kinshasa is the Académie des Beaux-Arts de Kinshasa , the only university-level art academy in Central Africa. Numerous sculptures are exhibited on the academy's premises. The country's famous artists like Lema Kusa, Alfred Liyolo, Rogers Botembe, Henri Kalama Akulez teach here. You can get a deeper insight into their work by visiting their private studios. Other well-known artists in Kinshasa are Nshole, Mavinga, Freddy Tsimba, Claudy Khan.

The Cité de l'OUA houses the government ministries of the Democratic Republic of the Congo. The diplomatic quarter is in the Gombe district. The nightlife of the capital takes place in the Zone de Matonge with numerous restaurants and bars.

The building of the Societé Zairois de Commercialization (SOZACOM), the high-rise Hotel Memling , the Central Market and the Académie des Beaux-Arts are worth seeing . Also worth mentioning are the Kinkole fishing port and the pagodas in the gardens of the Presidential Palace in Nsele. Historic buildings include the American Baptist Missionary Society, built in 1891, and the Roman Catholic Cathedral, completed in 1914.

One of the most important main streets is the Boulevard du 30 Juin , named after the country's independence day on June 30, 1960. There are numerous political and economic institutions . The five kilometer long road connects the Gombe district in the south with Kintambo and the Baie de Ngaliema in the west. The six-meter-high equestrian statue of Leopold II, dismantled in 1967 by order of the then President Mobutu Sese Seko, is in the museum on Mont Ngaliema below the Ministry of Defense.

The Tower of Limete is a 210 meter high unfinished television tower in the Limete district .

The Stade des Martyrs national stadium is located in the capital and has a capacity of 80,000 spectators. For special games (e.g. derbies), up to 100,000 spectators sometimes come to the stadium, which was renovated in 2008. It is the home of the twelve-time Congolese soccer champions DC Motema Pembe and the eleven-time champions AS Vita Club . The Stade du 24 septembre with a capacity of 24,000 seats is the home of the three-time winner of the Congolese football championship AS Dragons .

The Stade des Martyrs was built in 1994 with Chinese support and replaced the old Stade Tata Raphaël , about a kilometer away , where the 1974 fight between Muhammad Ali and George Foreman , known as Rumble in the Jungle , took place as the national stadium of the DR Congo. The "Fight in the Jungle" was a historic boxing match that took place on October 30, 1974. It was organized by boxing promoter Don King and - together with the supporting program (a major concert in which Miriam Makeba , James Brown , BB King , The Spinners and The Crusaders performed, among others ) - largely by dictator Joseph-Désiré Mobutu as an advertising measure for finances his country and all of Africa. The entire event was of tremendous importance for the self-esteem of the indigenous population of Africa, since other major events, such as the Olympic Games or a football World Cup, had not taken place on this continent until the 2010 World Cup in South Africa.

One of the most famous Congolese athletes abroad is the Kinshasa-born Claude Makélélé . He became French and Spanish football champions and won the Champions League with Real Madrid in 2002 . In 2005 and 2006, the English championship was added with Chelsea .

Dikembe Mutombo, who was born in Kinshasa, is one of the best defenders of the US Basketball League National Basketball Association . He won the NBA Defensive Player of the Year award four times . Mutombo began his career at BC Onatra basketball club in Kinshasa.

The industrial sector of the capital developed mainly around the processing of the existing mineral resources. The oil refineries and the manufacture of cement and sulfuric acid are also important. Important products are building materials, paper, tires, shoes, textiles, cigarettes, food and beer.

The whole area has been badly damaged by the economic decline and especially the high inflation since 1990. Mismanagement and corruption are widespread . There is a great lack of foreign exchange, which prevents the import of raw materials and spare parts.

In a ranking of cities based on their quality of life, Kinshasa was ranked 223rd out of 231 cities worldwide in 2018. 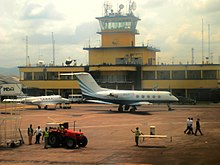 The city's international airport is Ndjili Airport . It is the seat of the three largest airlines in the country, flyCongo , Compagnie Africaine d'Aviation and Wimbi Dira Airways . In 2004 516,345 passengers were handled at the airport. The runway is in very poor condition. There are aircraft wrecks on the site. Part of the airport is rented to the UN.

The Kinshasa aircraft disaster in 1996 was the worst aircraft accident to date on mainland Africa.

Shipping traffic in the Congo ends in the capital because of the many rapids downstream that make shipping impossible. People and goods are transported from there to the port of Matadi on the Atlantic Ocean .

The capital's transport system is very underdeveloped. Local public transport (ÖPNV) is operated almost exclusively by collective taxis and around 200 diesel-powered buses. These are mostly extremely overcrowded and in extremely inadequate technical condition. The streets are mostly in poor condition and the city does not have an efficient, high-capacity public transport system, such as a subway , light rail or tram , to take the load off the street. On the network of the Matadi-Kinshasa railway and two branch lines, the state transport company ONATRA operates a suburban railway called light rail from the Ostbahnhof to the airport, Kimwenza and Ngaliema . In 2005, two old-age trains were available for this purpose, each running four courses per day on the first two lines. There are reports that this service is being expanded with Belgian help. 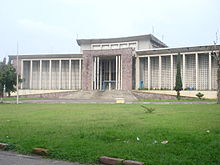 The city is the seat of numerous universities, colleges and technical schools, research institutes and libraries. The most important universities include:

Other important educational institutions are:

Provinces of the Democratic Republic of the Congo