This article covers the capital of Senegal. For further meanings, see Dakar (disambiguation) .

Dakar [ ˈdakar , French daˈkaːr ], as Ville de Dakar, is the capital of Senegal and at the same time the regional prefecture of the Dakar region , the most populous region in the country. A separate department was created for the city, the Dakar department as one of 45 departments that make up Senegal and one of four departments that make up the metropolitan region of Dakar . Dakar was traditionally the largest city in Senegal, but despite its strong growth rate, according to the results of the 2013 census, just lost this rank to the neighboring city of Pikine . Dakar is the country's most important economic center. The city is located on the Cap-Vert Peninsula as a port city on the Atlantic coast . Dakar is the westernmost city in continental Africa . 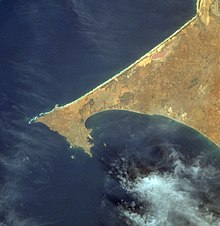 View from space in January 1993

The port city lies on the Atlantic. It stretches south from the Cap Vert peninsula to Cap Manuel . The port of Dakar and the island of Gorée are located in a relatively sheltered bay, shielded from the storms of the Atlantic.

The city now occupies the entire Cap Vert peninsula, making it the westernmost city on the African mainland.

The two highest peaks of western Senegal, the up to 105 meter high basalt cones of Les Mamelles, are located in the western urban area . On the western and higher of the two stands the Phare des Mamelles , the oldest lighthouse in Senegal. The west coast between Cap Vert and Cap Manuel , the Corniche Ouest , is often a rugged cliff made of volcanic rock with strong surf, but there are also some sheltered bays such as that of Soumbedioune , where a fish market and a craft market are tourist attractions.

Population censuses showed the following population figures for the department:

For the population of the metropolitan region, see Dakar region .

The Dakar department has an area of ​​78.5 km² and has consisted of four arrondissements since 1996, which in turn are divided into 19 communes d'arrondissement :

The most populous commune d'arrondissement is Grand Yoff in the north; Dakar Airport belonged to the neighboring district of Yoff . In Dakar Plateau in the south, the economic activities and most institutions focus. The tourist centers are Ngor at the Pointe des Almadies in the north-west and the island of Gorée in the south-east.

Dakar has a tropical climate with two seasons: the hot and humid season ( rainy season ) runs from June to October and is characterized by heavy rains in August and September in conjunction with average temperatures of 27 ° C. The slightly cooler season from November to May is the dry season with around 1 mm of precipitation per month.

Compared to other regions of Senegal, these temperatures are very moderate; they are sometimes ten degrees lower than usual because, due to the location on the peninsula, the wind in the city always comes over the sea, regardless of the wind direction.

In 1444 the Portuguese navigator Dinis Dias discovered the approximately 100 km² Cabo Verde peninsula , which was inhabited by the Lébou ethnic group, who fished for them. The first European base was the island of Gorée in the Bay of Dakar. Between 1580 and 1814 the island changed hands fifteen times: the Dutch, French and British took turns.

In 1750, the name Dakar appears for the first time on a hand-drawn map by the French naturalist Michel Adanson .

The city of Dakar was built around a French fort . It was founded in 1857 when residents came from the nearby island of Gorée. It grew as a port and around the railway line to Saint-Louis (1885), which is now only used for special excursions. The city later became a naval base and finally replaced Saint-Louis as the capital of French West Africa in 1895 . In 1887 Dakar became one of the quatre communes alongside Gorée, Rufisque and St. Louis , which subsequently made the inhabitants of these cities French citizens. The first black mayor was Blaise Diagne (1924-1934). From 1959 to 1960 Dakar was the capital of the short-lived Mali Federation , then the capital of Senegal.

From the 16th to the 19th century, slaves were shipped to North and South America and Europe via Dakar . The island of Gorée off the coast (today a World Heritage Site ) was the main hub for the slave trade. More enslaved Africans were shipped to the western hemisphere via Dakar and Gorée than from any other African port. On Gorée there is the Maison des Esclaves , the house of the slaves, which today serves as a museum and vividly depicts the suffering of the slaves.

In September 1940 the battle of Dakar broke out , an attempt by the Allies to take the strategically important port of French West Africa . The attacking allies were successfully repulsed.

In 1947 Dakar only had around 135,000 inhabitants. The establishment of the Institut des Hautes Etudes , which was expanded into a university in 1957, and above all the fact that in 1958 Dakar took over from Saint-Louis as the capital of Senegal, brought a boost to development.

Dakar is the seat of the Catholic Archdiocese of Dakar , created in 1955 ; the Cathedral of Dakar is located on Boulevard de la République.

Dakar is a member of the International Association of Twin Cities and maintains city partnerships with the following cities:

Worth mentioning are the Monument de la Renaissance africaine in the immediate vicinity of the Great Mosque and the historical center in the vicinity of the Place de l'Independance as well as the overseas port, from which the 15-minute crossing to the former slave island Gorée is possible.

The Roman Catholic cathedral was consecrated in 1936.

Hikes along the rocky coast and the view from the Dakar lighthouse are also interesting .

A market in Dakar

Dakar has a strong food, plastics, textile, wood and furniture industries and has an oil refinery and an overseas port. The country's textile industry in particular suffers from cheap imports from China. Of the ten companies with the highest sales in Senegal, Sonatel , Total Sénégal , International Trading Oil and Commodities , Senelec , Sonatel mobiles , Shell Sénégal , Suneor , Air Sénégal and Sococim Industries are based in Dakar. Dakar is also the seat of the GMD , the Société des Brasseries de l'Ouest Africain (SOBOA) and the West African Central Bank (BCEAO).

In a ranking of cities according to their quality of life, Dakar was ranked 163rd out of 231 cities worldwide in 2018. Although it is low in a global comparison, it is better than in other African capitals.

The traffic situation in Dakar is shaped by the geographic location of the metropolis at the extreme end of the Cap-Vert peninsula and its growth around the overseas port located there . The land connection with the inland is concentrated for kilometers on the isthmus of the peninsula. Since the national road N 1 became more and more the bottleneck for the growing volume of traffic, the construction of a motorway was supposed to relieve the chronic traffic jam in west-east traffic. Since 2013, the traffic situation has been relieved by Autoroute 1 , which begins as an urban motorway in the city center and has been a toll route since 2016 via the international airport and Thiès to the pilgrim metropolis of Touba in the east. A junction connects with the coastal town of Mbour in the south.

The Dakar train station near the city center and port is the starting point for a continuous railway line on the Dakar – Niger line to Bamako in Mali .

To the southeast of Dakar, 47 kilometers from the city center, the new Dakar-Blaise Diagne International Airport opened on December 7, 2017, with a planned capacity of three million passengers per year. It replaces the previous airport.

Ouakam airfield near Dakar was of great importance for international air traffic in the first third of the 20th century, because in the 1920s and 1930s planes traveling from Europe to South America had to stop over either in Saint-Louis or here to refuel . When Ouakam became too small during World War II, the Dakar-Yoff International Airport was opened north of it in June 1944 . It was 15 kilometers from the city center and served by a dozen foreign airlines. Air France's first commercial flight with the Concorde supersonic airliner , which ran from Paris to Rio de Janeiro in 1976 , also had a stopover in Dakar. In 1996 the name was changed to Dakar-Léopold Sédar Senghor Airport .

In May 2010 a new ferry terminal was opened in the port of Dakar for ship traffic abroad, to Ziguinchor and to the island of Gorée. The cost of the new building amounted to 1.6 billion CFA Francs (about 2.4 million euros).

The state-owned RTS is based in Dakar and broadcasts its two television programs (RTS 1 and RTS 2) as well as numerous radio programs, including Dakar FM and Radio Sénégal International . Private radio stations are Sud FM , Nostalgie , Rfm , Walf FM and Sept FM . The private television station 2sTV has existed since 2003 .

Dakar owns the Université Cheikh Anta Diop de Dakar (founded in 1957) and the Institut Fondamental d'Afrique Noire (IFAN) is located here. There are several research institutes and museums, including the Marine Biological Museum on the former slave island Gorée, which is attached to the university, as well as some cultural institutes such as the former Center Culturel Français or the Center Douta Seck in the Médina.

The Théâtre National Daniel Sorano (named after Daniel Sorano , an actor from Saint-Louis who was engaged at the Comédie-Française in the 1950s ). Plays, concerts and traditional dances are offered.

The main museums of Dakar are:

The city has become known through motorsport as the destination of the Dakar Rally , formerly the Paris – Dakar Rally. The final stage of the rally took place around Lac Rose , a red salt lake in the north of the Dakar peninsula.

The Léopold Sédar Senghor National Stadium in the Pule district was opened in 1985 and holds 60,000 spectators. It is the home of the ASC Jeanne d'Arc club , one of the oldest and most successful in the country. Among the numerous sports clubs, ASC Diaraf and US Gorée (home stadium of both clubs Stade Demba Diop ) are worth mentioning because of their age and their successes. After the First World War, Dakar was the starting point for football in French West Africa and a regular host of the Coupe d'AOF finals .

For the Senegalese form of wrestling, called Lutte senegalaise , a new venue, the Arène Nationale de Lutte with 25,000 seats , was planned since 2010 . It was built in Pikine.

Since 1992, the Biennale de l'art africain contemporain Dak'Art has taken place every two years in May and June . It is considered the most important art event in West Africa and provides a stage to artists from Senegal and numerous African countries.

Another highlight in cultural life is the Youssou N'Dour nightclub - Thiossane - where the artist himself gives concerts from the early hours of the morning.

The list of personalities of the city of Dakar includes well-known sons and daughters and other people connected with the city.